Note: This post is one of a series on finding the best hidden delicacies in Chengdu called Underground Gourmet. Check out the last entry on the best noodles in the city.

Dumplings are one of life’s simple pleasures.

Legend has it that Marco Polo brought the recipe back from China in the 12th century and made them famous in the West as ravioli — little flour pouches with tasty fillings, boiled and served. Dumplings are a staple in China and there are a few different ways to serve them up. In the northeast, the fillings are more diverse and the sauce consists mainly of black vinegar, garlic, a bit of soy sauce and salt and pepper. In the southwest, the fillings tend to be pork-heavy and the sauces are spicy-sweet or just plain spicy.

Baozi, or steamed buns, are dumplings’ bigger, fatter cousin. Baozi tend to be breakfast fare, but they can also be snagged en route somewhere as a small filler between meals. Most mornings you can find (and smell) baozi joints on every street serving up meat and sweet red bean flavored buns with hot soy milk and maybe deep fried dough strips. In the southwest, baozi can range from 6-8 cm across to 1-3 cm across little tiny baozi and, again, are pork heavy. In the north, baozi can be huge (see our Northeast Big Baozi spot below) and have a variety of fillings, ranging from beef to goat to assorted veggies. We mention a couple good baozi joints in this essay.

Mantou, the Other Steamed Bun

The third flour-based option is mantou, the stepchild. Mantou can be a bad experience for some people, but I find that dipping dry, tasteless mantou in hot soy milk helps. I make a small description of good mantou below, you can visit Yulin Jie for the goods, or search your own neighborhood and post your little hole in the wall here on Chengdu Living.

In the years that I’ve been in Chengdu, I’ve developed a taste for a few select locations in the city. Here’s a list of my favorites, in no particular order. All of them are worth checking out if you’re in the city and want to try something new. 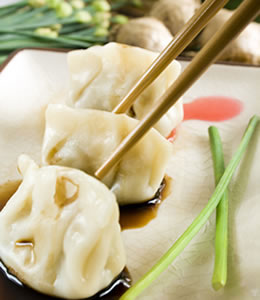 This tiny dumpling spot actually never intended to serve sit-down food to anyone. At first, the laid-off boss just wanted to make some extra cash with his wife selling fresh handmade dumplings to his neighbors. His neighbors had other ideas. As soon as the people ate his lotus root dumplings, they demanded he open up for lunch. At first he refused, but then after his string bean dumplings brought in the suit crowd from nearby companies and office buildings, he had no choice but to consider tables and chairs. In the face of high society’s demands, he set up a little stove in front of his 10m2 hole in the wall, bought a few plastic chairs and tables and cooked up some dumplings for the lunch crowd. But he remained stubborn about the hours.

This spot doesn’t offer up any special sauce — the attraction here is the fine dough, excellent dumpling craftsmanship and delicious mix of meats and vegetable he offers. Lotus root and string bean are popular, but his pork and onions, beef and celery and just-pork varieties all do very well. He offers up 10 dumplings for 1 – 1.5 yuan, but you have to be quick, Laid-off Dumplings only serves between 11am and 1pm. If you arrive before or after, you’ll have to stew up the dumplings at home.

Spring Sun Dumplings embodies the classic tale of rags to riches. The shop is named after the boss’s daughter, who was just a lil’ tyke when it first opened, more than 15 years ago. The place was one of the original go-to places by the north gate of Sichuan Normal University and soon enough there were people ordering his special Red Sauce Dumplings all day and into the night. The boss did well and was able to survive the downturn in business after Sichuan Normal opened up the south gate, which was more convenient for students and was also a bit closer to the city.  Students still walked to the north gate for the old restaurants they loved and the for the grimy grit of the old school university life. Spring Sun stayed a favorite and that little girl who darted in and out of the shop is now a mother and the shop keeps trucking on. Indeed, after overseeing the expansion of the business into a franchise with shops all over town, including a coveted spot on the second floor of Xiang Bin Plaza, she and her father are now living the good life, a far cry from the hole in the wall they started in way back in the day.

The secret to Spring Sun’s success is the quality and consistency of his sauce. A proper red sauce will be a bit spicy and a bit sweet with a thick, oily texture and a glow. When naked, white dumplings are drenched in a good red sauce, they will glow and sparkle as the secret ingredients are magnified by the dumpling’s pale skin and the rays of the sun. After all the dumplings are coated, there should still be a substantial bit of sauce at the bottom of the bowl — the key is to take a bite out of a dumpling and soak up the spicy-sweet liquid ruby essence. The dumpling should be like a sponge and the whole end of your chopsticks should be dripping bright, redness. This is a good Red Sauce and you can find it at Spring Sun.

Some places get famous for only one dish and Silver Tree Dumpling and Noodle Shop is one of those places. They are a classic northeast dumpling spot, so you can make your own bowl of sauce out of black vinegar, soy sauce, garlic, salt and pepper and oils. They serve one of the city’s only Kidney Bean and Pork Dumpling, which is a favorite in town and, through word of mouth, has managed to keep the Silver Tree thriving. They routinely sell out of Kidney Bean and Pork and it is quite common for a customer to walk up at around 2pm and ask for that particular taste, only to leave dejected and have to find somewhere else to eat. Its one of those things where you will cross town to get a bowl and if you happen to miss out the whole day is shot. So take my advice and be there around 11:30am so you can get your Kidney Bean and Pork fix taken care of. Another good thing about this place is they serve huge dumplings for cheap — 1 yuan will get you 6 dumplings and 10 dumplings is enough to fill up your average sumo wrestler.

This place sprang up suddenly and started selling some of the best baozi in town. It is just a little shack down Yulin Jie — almost looks like a newspaper stand — and you might walk passed it without thinking anything, but these two northeasterners know exactly what they are doing. The aroma of fresh, steaming wheat flour and the pork with “Chinese sauerkraut” that you know is bubbling inside will stop you in your tracks.

When I first came across this joint, I was buying milk across the street when i saw a huge northeastern guy sitting there with chef’s whites on and playing the flute. I had to go and check it out. When i got close enough to smell the baozi, I knew I was going to spend some money here. It was about 3 or 4 in the afternoon and I didn’t know exactly when I was going to eat these baozi, because I wasn’t that hungry and I had dinner plans, but once I took a look at them — almost 10cm in diameter and smelling wonderful — I simply said:

But when he opened up the steamer he started and said in a thick accent:

“Oh shit, I forgot which is which. Tell ya what, I’ll just sell ’em all for 1 yuan and we’ll see what happens … if you get a suan cai one, then you make out good, if not then we’re even.”

This guy was a real character and I couldn’t leave just yet, because I had been looking for a good baozi place for a long time and kept getting disappointed by the “1 yuan for three baozi” shops, where the baozi are tiny and you pop them in your mouth like hot, doughy puffballs with a smidgin of meat. I was looking for the huge, bursting King of the Baozi. So now that I had found a sizable one, for a good price, being sold by an interesting character, I decided to stick around and see what else he had to offer. I was rewarded when he pulled out a fresh tray of mantou — the white fluffy bread-like things that I had always shunned like the plague, because everywhere i had gone up until then served mantou that were dry like cardboard, fluffy like white packaging popcorn and utterly tasteless. Might as well eat a tired old cloud.

When I eyed his mantou sceptically, the boss got real excited and said:

“I know what you’re thinking, but these mantou are delicious. The best. I make them with authentic “old dough.”” (“Old dough” as I understand it, involved taking the leftover dough from a batch and mixing it in with a new batch, which helps with texture, flavor and consistency. Any bakers out there care to illuminate?)

He then broke off half of one, which was already a huge piece and demanded I try it out. Like I said, I hated mantou, but i had faith in the man. So I took a bite and was instantly transported back to Germany, where bread is ambrosia. His mantou had the chewiness of a good, solid loaf and the wheaty flavor of bread just out of the oven. The aftertaste was a little sweet with a hint of the heady aroma of baked, fermented wheat flour. I bought three.

Back in the day, mantou were made with all natural ingredients and tended to be chewy, hearty, savory and slightly fluffy with a sweet aftertaste. These days, its hard to find a chef with the skills to produce such a mantou from scratch, so many shops use artificial ingredients to get the desired result. Dongbei Da Bao is the first excellent mantou I have eaten in a long, long time.

I ate the baozi the next day for breakfast, and they retained the texture of fresh baozi, the meat was thick, delicious and hearty and practically exploded out of the dough when i took a bite. Truly a work of art.

I could not write about baozi without mentioning 12 Bridge Street Baozi, probably the most famous baozi shop in the city. The lines out of this shop are consistently 20-30 meters long and last from the break of dawn to about noon. There is no secret to 12 Bridge’s success: they have a crew of dedicated women pounding flour all morning and they stuff each baozi with the standard pork and vegetables, pork and sauerkraut, and just plain old pork. The dough is delicious and hearty, the meat is juicy and fresh and they have huge baozi for 0.5 – 1 yuan a piece.