Note: Since this post was published, the lineup has been released and you’ll find it posted below.

#5. What is Zebra Music Festival?

Last summer in Chengdu tens of thousands of music fans came from near and far to attend the Zebra Music Festival (ZMF, or ?????) which instantly earned hipster credit among the burgeoning Chinese youth. For three days at the beginning of May, ZMF will host its annual event and will undoubtedly draw a massive crowd back to the familiar fields on the outskirts of Chengdu.

The full lineup hasn’t been released yet, but that doesn’t seem to dampen the excitement of the thousands who have already announced their attendance on Douban (among other social networks) which are buzzing with the recent announcement. However, judging by the previous year, we have a good idea of what to expect.

Last year, more than 60 performances (local, domestic, and international) were spread across three stages, and although the main stage dwarfed the rest, they all had their own character and style. Even though last year’s main stage was dominated by the kind of pop music that makes you picture waving glowsticks, it was a blast. The main area is absolutely massive and is awe inspiring in both its size and design.

The Xiong Mao (Panda Club) Electronic stage, with its dirt dance floor, was sandwiched by 5-meter high speaker stacks and the familiar and much-missed “??“ logo printed proudly at the top like a star atop a Christmas Tree. The Panda stage featured local and foreign DJ’s (including myself as Just Charlie) playing a variety of electronic music including everything from Trance to Drum & Bass.

Unfortunately, the future of the Xiong Mao stage at this years festival is in question. (When I have concerete info on this, I’ll update this part)

#3. Where Does the Festival Take Place?

ZMF is taking place in the same place as last year, which is Tulip Park in the Xindu district. The name os the park is Tulips Flora Park (Yujinxiang Huahui Gongyuan ???????) and it’s close to the Panda Research Base which is a major local landmark. There are buses that run to the festival location in conjunction with Zebra, or taxi fare will cost you about 30 yuan.

#2. How Much Does Zebra Cost? How Do I Buy Tickets?

The price has been raised this year (to the displeasure of a small minority) to 80 yuan per day or 198 yuan for three days.

Much of the crowd spends the day wandering between stages with friends, enjoying the pleasant atmosphere until it ends with a headliner closing out the main stage at midnight: so bring money for extra expenses. Meals, snacks, drinks in a backpack. There’s a wide selection of food and drink available at reasonable prices.

This is your only chance to enjoy anything even close to this for a year until this happens again. Seize the opportunity to see some of China’s most popular and breakthrough artists, and even if the music isn’t always great by the standards of most Westerners, the experience itself is a blast. This picture describes it pretty well: 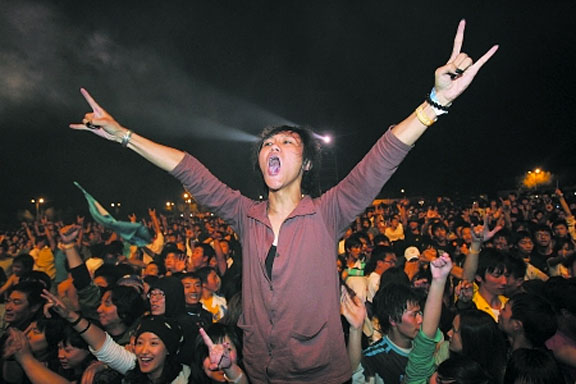