The Natooke Bicycle Shop hosted Chengdu’s first “Alleycat” street race this last Saturday, and it was a historic event that drew together hundreds of members of the city’s burgeoning bicycle sub-culture under the Natooke banner.

In case you aren’t familiar with an alleycat (as I wasn’t), it is an informal, urban bicycle street race that demands quick thinking and knowledge of the streets as much as a heavy pedal. Birthed from the bicycle messenger culture of cities like Toronto and New York City, alleycat races can attract hundreds of cyclists who race between checkpoints, often on fixed gear bicycles. But by most accounts alleycat races aren’t  just about being the fastest: there’s emphasis on ad-lib fun and debauchery.

“It’s kind of like a scavenger hunt” says co-organizer Jacob Klink. “The points are not revealed until just before the race.  It’s not just a test of speed and fitness, but also someone’s wits and their ability to navigate the city.”

This event wasn’t just an alleycat street race. Nicknamed “Zombiecat”, this was a halloween party on wheels, roving across Chengdu in waves of cyclists.

At the Alleycat Event

Jacob Klink and Larry Adamson of Natooke Chengdu began promoting the underground race several weeks ago on their Weibo account and with a post on the Chengdu Forum. With such a humble promotion campaign, many more participants emerged than organizers had expected.

“Response to the alleycat was amazing,” said co-organizer Jacob Klink. “With only 10 days notice we had over one hundred people from in and around Chengdu show up to race. Add atop that the number of bystanders, photographers, friends without bikes, etc. and it made quite the crowd.”

Competitors arrived at 4pm and registered just north of Tianfu Square at the center of Chengdu and were handed two items only moments before racing off:

The rules were as follows: reach each of the map points in any order, finishing at the sixth and final location, the Natooke shop in the South of Chengdu.

After a precious few minutes of planning, hundreds of cyclists ran across the street toward their bicycles when Larry Adamson screamed “Go!” into a megaphone. Within sixty seconds the area was quiet and dozens of cyclists were off, pedaling at full speed in every direction. Below is a Youtube clip of this moment:

At each location were volunteers and affiliates of Natooke who stamped the map of each racer, offering encouragement and Dixie cups of water.

Although there were many foreign participants, all three winners were Chengdu locals with superior knowledge of the Chengdu streets. Winners raced down the final stretch toward the Natooke shop welcomed by enthusiastic cheers, and when they dismounted their bikes after the 20km hour-long trek, they looked ready to collapse.

The winning female cyclist, 22-year old Li Yanxi said: “I participated in a previous alleycat race organized by the Tanker fixed gear shop in Chengdu. The Natooke event had more competitors and overall felt like a larger production. The prizes are fantastic, too.” When asked what was next for her, she added “Upgrade my bike and prepare for the next event.”

Chengdu’s first Alleycat street race has already transpired, but Zombiecat organizers promise that there are sure to be more.

“We want to organize alleycats in Chengdu regularly”, says Jacob Klink.  “Maybe every few months organize a race on the order of this past weekend.  As I said the format’s flexible and we’re already talking about doing different styles including a ring road relay or a grand prix. Also we’re expecting within the next several months to do at least one big event over a weekend that includes a number of different races and bicycle competitions that hopefully should draw folks from all corners of the country to come out and ride. Keep your ear to the ground and listen for that whirring of the bicycle chain. And follow us on Weibo” 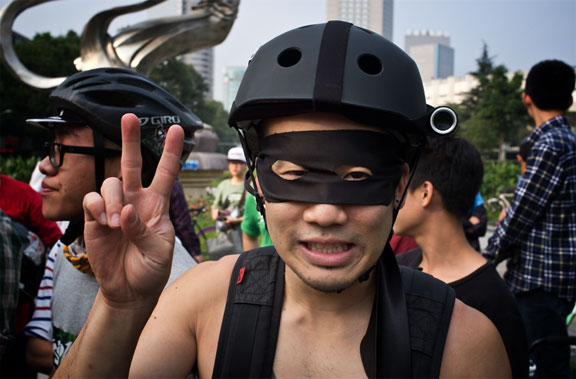 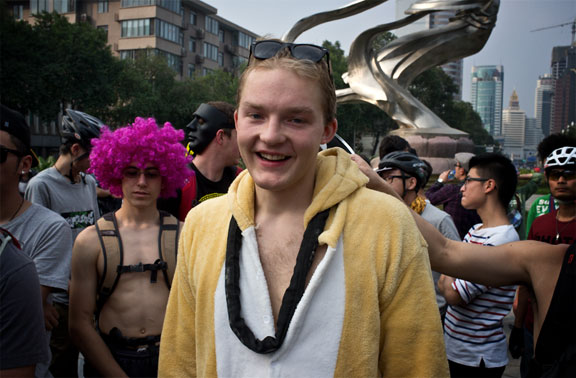