In recent years we’ve witnessed Apple products transform from an obscure symbol of luxury in China to a mainstay in the digital landscape.

On an average day in Chengdu you might see hundreds of people clutching iPhones, from the subway to the park to the bank. It’s no longer just a symbol of affluence (although it remains that), but it’s become a practical tool of modern life that Chinese want just as much as anyone else.

They want it so badly in fact, that Apple has recently taken major initiatives to court Chinese users. One of these is opening the first official Apple Store in Western China, located in Chengdu.

The opening of this Apple store, on Saturday the 15th, coincides almost perfectly with the release of iPhone 5 in China on the 14th, too. Between all of the recent product releases and successful expansion into China, Apple is almost certainly looking at record-setting fourth quarter revenue. We’ll see if that stabilizes Apple’s recently-tumultuous stock price.

Over the last two years Apple has come to not only understand the importance of the Chinese market. PC sales are declining in developed countries while Chinese customers with newfound affluence are buying Apple devices at a furious pace. This growth means that China is now Apple’s second highest-grossing market in the world after the United States.

The growth potential for Apple is so great that Apple’s CEO Tim Cook has said of China: “The sky is the limit”.

Once upon a time, everything in China required Windows. Whether you wanted to chat with friends online or manage your bank account online, China was for years firmly in the Windows camp (and even “boasts” the largest number of Internet Explorer 6 users in the world – an 11 year old operating system incompatible with thousands of modern websites).

That is changing as China slowly adopts Apple platforms as they become increasingly popular. Taobao supports Mac OS X for sending funds and Chinese banks are slowly beginning to get the picture. Meanwhile the powerhouses of Chinese internet, QQ and Weibo are available on nearly every Apple device, and iOS is the go-to platform for many mobile developers in China (not due to sheer user numbers, but in average revenue per user, an industry figure to calculate the relationship between user base and revenue). China woefully backwards internet is slowly modernizing.

Sina’s super-popular Weibo service was added directly into both iOS (the mobile operating system that powers iPhones and iPads) and Mac OS X Mountain Lion by Apple in 2012. Input your username and password once and you’ll receive notifications whenever someone messages you on Weibo, automatically.

Check out the “Mail, Contacts, and Calendars” section of the System Preferences on your Mac and here’s what you’ll find now: options to add accounts for popular Chinese internet services like 163.com, 126.com, QQ Mail, and more.

In recent years fake Apple stores have been appearing all across Chengdu, usually selling Shui Huo (??), or illegally imported, Apple products. How is one to know which Apple Store is the real one? I doubt much confusion will remain after the impressively large and unmistakably authentic Apple Store opens in Chengdu this weekend.

One question regarding all the fake Apple stores is what happens to the impostors when Apple is in town? Only time will tell.

One thing that I think is a safe bet, though: Apple’s influence in China will continue to accelerate. And at the very least, we’ll now have an official outlet to purchase Apple products in Chengdu. The days of wondering on which illegal boat our iPhone made it’s way to China from Hong Kong might be numbered. 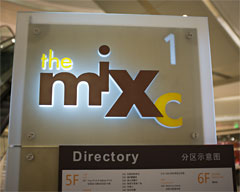 I showed up at the Mixc Shopping Mall (designed by noted American architecture firm Callison) on opening day, an overcast Saturday afternoon. Luxury shopping malls are opening in Chengdu at an incredible rate, and this was yet another one that I hadn’t been to before.

The mall itself was sparsely populated with holiday shoppers until I found the Apple Store on the ground level. The single-level store was packed with hundreds of customers, the crowd dotted by Apple retail employees wearing bright red shirts.

Among the Chinese retail employees were a handful of foreigners working the floor. One I spoke to told me he had been sent to Chengdu for one month from Australia’s flagship location in Sydney. Others had come from other countries to assist in the opening of Western China’s first Apple Store. “The Asia Pacific region is of huge focus to Apple – especially China”, he told me. “There are 14 million people here, it’s incredible. My home, Sydney, is just four million people. This is my first time in China, I’ve never seen anything like this city before.”

Photos from the opening day:

I’d love to hear what you think about Chengdu’s new Apple Store. Will a fourth quarter with greater presence in China bring Apple’s stock back up to record-breaking territory? Does Apple stand a chance against Android and regional competitors in mobile computing? Let me know in the comments below.