This is the second in an ongoing series highlighting artists in Chengdu. For the first installment, please go here.

When I came across the painting Wild Garden, I thought, Pop Surrealism. The colors fit. The pastel frock has a rotundness against the painting’s muddled and blended background, similar to Mark Ryden’s use of pastel, and the whole thing treats of nature in a deliberately mocking way. The woman recalls the elegant nymph-like muses of Degas, however; she is not in the least grotesque. A vaguely Asian-looking person isolated against a desolate wilderness, she creates an overall mood too somber and earnest to be absurd. That right bunny ear jerks upward as though genuinely listening to, or for, something.

The artist is not a surrealist, but is widely regarded as one of China’s greatest living masters of realism. He Duoling (pronounced Huh Doo-oh-ling) resides in Chengdu, where he was born in 1948 and earned his art degree from the local teacher’s college in 1977. He went on to study painting at Chongqing’s Sichuan Fine Arts Institute in the late ’70s, and with a number of his colleagues in the early ’80s, founded China’s infamous “Scar Art” movement. 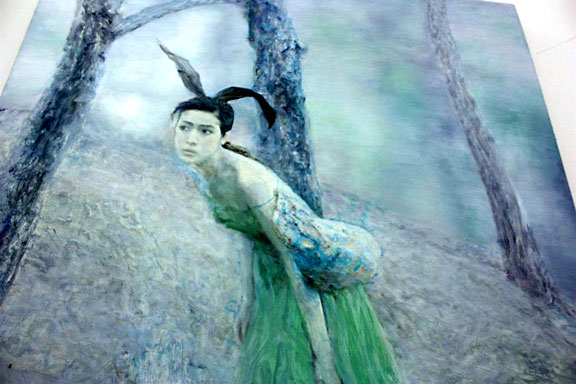 The Scar Artists were attempting to counteract a strict regime of socialist realist propaganda at the time. Insisting on more personal–and more reflective–themes, the Scar Artists co-opted the idea of the “real” for themselves while exploring subjects of humanism, intimacy, memory, emotion, and sexuality; in a reaction to the political ravages of the previous decades which had not been allowed to surface in art through critical dialogue.

Thanks to a friend, I was able to meet He personally and pay a visit to his studio. The studio, in He Tang Yuese, boasts staggered walls and windows of varying lengths and sizes, with one footbridge intersecting the structure diagonally in a cubistic temple to modern art. It is located near other outstandingly modern buildings and galleries, a true artists’ sanctuary. 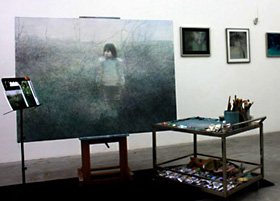 The first painting I saw when I walked into the garage was in the same series as Wild Garden, entitled Shalott the Rabbit. Standing on a broad easel, across from the indoor basketball hoop, was this painting–it shimmered and floated in an otherworldly haze. Monotone, like the concrete pillars and structures of Chengdu, its green tint would be one I’d come to recognize. The painting deliberately borrows its imagery from the 1888 work The Lady of Shalott, by John William Waterhouse. The artist often plays on the romantic musings of the Pre-Raphaelites–painters like Waterhouse, Hughes, and Millais. Those Christian idealists attempted to resurrect what was dead or dying in an era of industrialization: feminine beauty and a sense of innocence and idealism, expressed through sincere renderings and faithfulness to “nature.”

He told me he wanted the rabbit version of Waterhouse’s Lady to be “limited,” meaning he wanted her to float in an isolated cubicle of water, like a tank–contemporary shorthand for innocence and beauty, which can be pummeled together with a prop and stage set.

He Duoling does sincerely respond to the Pre-Raphaelites; he does not merely parody them or extrude and rip off their imagery, like a pop artist. He’s also inspired by Andrew Wyeth’s famous masterpiece Christina’s World, which in one painting he simply copied, overlaying it with the image of a young Chinese girl lost in her own revelry. Just like the romantics, he starts out knowing what he wants to paint, creating a luminous base by applying many continuous background layers, outlining the foreground figures carefully, and composing his scenery with strokes of tinted oil liquid mediums. He creates a wash, also using techniques from traditional Chinese landscape painting. In his figures, who are mostly Chinese or look Chinese, the feeling of revelry and complacency reflects a sense of both national pride and personal beauty. An exaggerated light saturates the canvases, which are often glowing.

What bothers me about this work is not the way his paintings look; they’re beautiful. In their beauty, and also in the detachment and complacency of the subjects, there’s a uniqueness and an ascendent quality, as if the images were going to step out of the canvas and fly upward. But this is supposed to have radical implications for Chinese art. How different Chinese and Western sensibilities are! In the West, nothing’s threatening or subversive about depicting a beautiful woman, and pointing out man’s unbalanced relationship with nature is almost required. 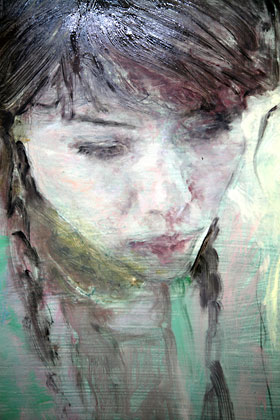 To use tautology, an art movement represents new ideas that should be taken in context. In China, art has always held on to the tenets of realism. True, Chinese art may be abstract; it applies a wide range of interpretations to the real. But from ancient times until today, a “master” of art has been someone who can render nature exceptionally well. In Chinese schools, from grade level through university, drawing from life is the most rigorously practiced form of art. It’s done with a seriousness that is rarely applied in any Western-style education.

In the 20th century, this use of realism took an ideological turn, in the name of social realism and propaganda. The Chinese consider figure and still-life drawing to be the essential underpinnings of a socialist art education, garnered by tradition. But regardless of use, China maintains a strong national pride in its beauty and quality standards in everything. According to some artists I’ve talked to, “realism” in Western terms means work that’s amateur or incomplete. Given the painstaking renderings of art students in China, from novices to graduates, it’s no wonder why many Chinese sniff at the work that hangs in galleries overseas.

But when I look at the Rabbit series, it’s not technicality that makes He Duoling’s work great. It’s the other aspects–color choices, distortion, the positioning of the figures. And it’s also radical political innuendo, harkening back to the 1970s. In all his images, isolated, despondent, or transfixed adults and youths, placed in rugged or watery or ill-defined settings, paint a picture of China entirely backwards: it’s in perfect economic suspense. They capture an idealized China that doesn’t require “social realism” to exist. Adapted from late 19th-century British poetry, its romantic and literary themes somehow speak to the post-modern condition.

I don’t know the reason for He Duoling’s success. The artist seems to delight in the vitality of his subjects, mostly young, who look transfixed in time and pleased with their own dream-like perfection. Many could well belong to another era. Or, to put it differently, the youthful world contained in his musings belongs to a present-day China, but one which seems to dream of the past. He Duoling has described his own work as “mystical” and “poetic,” suggesting that he doesn’t know what it means or doesn’t want to say.

My guess is, what makes it successful is a combination of things: the Chinese love of the “beautiful,” which privileges Eastern thought but delights in Western subjects; an art market enchanted with the Orient; a Chinese population that sees progress wherever there is change, and novelty when something is drawn from outside. Over the years, He has painted much of the real landscape around him, but he clearly manipulates the settings, flattening them; painting into them–metaphorically and literally–layer after layer of meaning.

8 thoughts on “Portrait of a Chengdu Artist: He Duoling”