While I was traveling across the United States this spring, I was contacted by an event promoter with a gig offer: Chengdu’s Big Love Music festival in June of this year. Featuring a cast of celebrity performers and sure to attract a throng of Chengdu music fans, it promised to be an enormous event for Chengdu. It turned out to be an enormous event, but not in the way that organizers had intended.

At the time of contact the only thing I knew about Big Love was that it was scheduled last year in the vicinity of Chengdu but was cancelled after the lineup was released and promotion had already been in full swing for weeks. With last year’s cancellation casting doubt in the eyes of many on the 2012 iteration, Big Love happened last weekend and I performed there on the electronic stage.

As soon as I entered the festival grounds on Friday afternoon I could tell that something was very, very wrong. Here’s what the Big Love experience was like and I’ve learned about what went down over the weekend.

Approaching the gate of the festival (hosted at China’s Intangible Heritage Park), it was already apparent how much bigger of a production Big Love was than Zebra Music Festival which has become a mainstay of summertime Chengdu over the last three years. The gate was enormous and hundreds of security officers were walking around the area in formation.

On my way to the entrance area, I was approached by no less than five people offering reduced price tickets to me. The official entrance fee per day was 300 yuan (almost US $50) and the offers I was receiving were about half of that. Later I learned that security officers were charging people 70 yuan to escort them inside the grounds, pocketing the money themselves. Transactions like this happened thousands of times a day, lining the pockets of security guards while official ticket sales reflected as little as 15% of the crowd inside the venue.

Upon entering the festival grounds and walking 15 minutes to the main stage, the place was looking mostly empty and dead. The grounds were enormous and the stages elaborate, but the massive crowds of people that go along with a music festival were simply not there. Here’s what the Big Rock stage looked like:

I felt bad for people who had paid to attend, seeing as 300 yuan is no paltry sum in the city of Chengdu and many of my friends declined to attend on the basis of price alone.  Hopefully the crowd will pick up, I thought, as I walked for miles around the festival grounds.

However, upon visiting all of the stages, it became clear that the festival had failed to draw the crowds it had promised. The Electronic Stage, Chengdu Stage, and the Morning Bar stage were all completely devoid of people. Most of the bands at Big Love performed to an audience of security personnel, who were ever-present on the festival grounds and dressed in all black. Photos below will give you an idea of what the atmosphere was like during the daytime.

The Power Goes Out

Although Friday wasn’t very well attended, Saturday was better, hosting big acts like MC Hot Dog and headlining band Suede. There was just a small hangup: there was no electricity anywhere on the festival grounds for hours in the afternoon. Because all vendors used charge cards (which you buy and put money on) to handle transactions for things like food and drinks, the festival was reduced to a few thousand people standing around, for several hours.

After speaking to sound engineers on site who were sitting under a nearby tent, I learned that the power hadn’t worked since they arrived at 10am. As I surveyed the nearby landscape I noticed that there were more security guards than actual patrons. I reluctantly went to the DJ booth to setup my equipment before my scheduled performance time and waited for about an hour before the power returned and I could begin playing music. A few dozen people turned up and we had a great time together, it turned out.

That evening I caught Suede, British alternative rock band and one of the festival headliners, which was by all means a well attended set. Tens of thousands watched them perform and cheered loudly until they returned again for an encore at 1am, well past the festivals scheduled ending time.

It wasn’t until the final day of the festival that everyone started talking about the serious problems behind Big Love.

While browsing Weibo on Sunday afternoon, I noticed a tweet sent by local celebrity Li Bo Qing (who was interviewed on Chengdu Living last year). Although it’s been deleted now, here’s the message he sent to his 100k followers in Chinese and in English, which got retweeted thousands of times by the time I read it:

“Today I saw media reports about the problems with Big Love. The lead organizer of the festival, Mr Xie, has fled the scene as his assistant has been apprehended and the police are now involved. What’s funny is that due to low ticket sales, Mr Xie contacted my staff and requested that I help promote the event using my Weibo account in exchange for payment. What’s even more funny is that after I refused, they requested that I perform at the festival and asked what my performance fee would be. I’m not a singer, and I refuse to earn money in this way. Big Love has ruined Chengdu’s reputation.”

This tweet was just the tip of the iceberg however, as I began getting in touch with others who had performed at the festival. It turns out that they and dozens of other performers hadn’t gotten paid their performance fee, lodging, or transportation. Hundreds of event organizers, who had flown to Chengdu from Beijing, were stuck in Chengdu with no return flights booked for them and management absent. This is where everyone took to the internet to absolutely blast Big Love and it’s management. Big Love responded with a predictable “Sorry guys, we’ll handle it” but by this point, all faith in Big Love and it’s conspirators has been totally shot to pieces.

Zebra Music Festival, after a poor turnout this year, is in jeopardy and likely will not occur from reports that I’ve heard. After this fiasco, Big Love has virtually no chance of a reappearance in Chengdu or elsewhere in China.

Despite all the hardships of Big Love, you could see people making the best of the situation throughout the grounds. Some people came in elaborate costume, some brought skateboards and bicycles inside the venue, and others were content to just smile and enjoy the sunshine. I came with friends, laughed and enjoyed music, and got sunburned.

Although the festival organizers are said to have squandered a small fortune in the ballpark of $7 million, many in Chengdu weren’t upset about it. Kafe Hu, the Sichuanese rapper who performed at the festival, told me: “The organizers screwed up badly. In terms of organization, it was a nightmare and everyone knew it. But I enjoyed spending the weekend outside with friends and I don’t personally feel bitter about the festival”.

This more or less sums up how I feel about Big Love. I sent a frustrated tweet on Saturday afternoon declaring that the festival should be called Big Fail (which rhymes with festival name in Chinese: ??????) when I realized that the power had been out for hours. But despite that and other disappointments, I had a good time. I knew to bring all the requisite festival supplies along with me, including great friends who are capable of making the best of a less than ideal situation.

Below are some more photos that I took at Big Love festival, to give you an idea of what kind of sights were there. 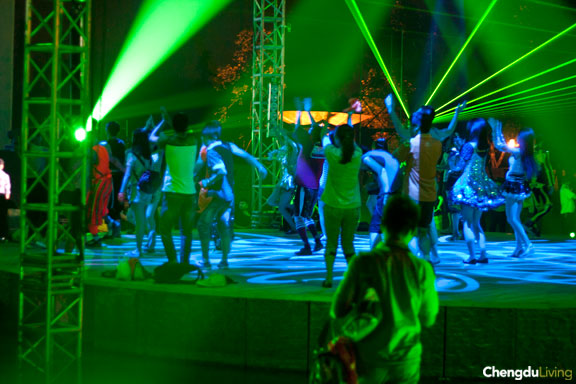