Chengdu Living suddenly became inaccessible from within China on Thursday March 10th.  Hoping for the best, we held on for a day until we were able to confirm that indeed, after 14 months of being online, we are now officially blocked — otherwise known as being “Harmonized” (????) to use the local terminology.

Update: Chengdu Living is currently accessible from Chengdu without a proxy. It’s evidently blocked in other locations in China so the block might be intermittent or based on region. As always, we recommend using a VPN so won’t have to concern yourself with this at all. See below for our free VPN giveaway.

How Did This Happen?

The short answer is that we don’t know.

Although “the rules” of publishing a blog about life in China don’t exist, we knew from the beginning that being blocked was a possibility. Over the years we’ve developed a deep love and respect for Chengdu and we feel satisfied that Chengdu Living reflects that, but there’s another side to this. We didn’t want the content to be too far removed from the social and political realities of Chengdu. It’s a delicate balance to maintain and in this situation you will get no warnings: you go straight from business as usual to being blocked with no explanation.

Foreigners who’ve spent considerable time in China know how the pleasures and trials of living here are complex. As with anywhere else, there’s good and bad. We wrestle with the hardships and frustrations of China like everyone else, but our ideal has been to cultivate a platform which celebrates the positive aspects of life here. Those which excite us, which we talk about amongst ourselves, and we want to share with everyone.

In short, the block is a surprise to us and we aren’t clear for what reason we were blocked. However, our current best guess is that it has something to do with a story we published several weeks ago about the effect of China’s burgeoning middle class on recent political unrest in Egypt. 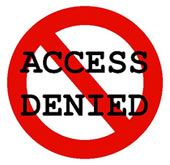 Basically if your site contains reference to REDACTED REDACTED, REDACTED Movement in China, or REDACTED Square, then you run the risk of being harmonized. It’s estimated that there are tens of thousands of civil servants propping up “The Shield”, presumably by searching for sites including certain keywords. For this reason, many dissenting Chinese choose not to share or discuss their opinion on sensitive topics at all.

The political and ideological root of the Firewall carries an ironic and almost poetic twist, though. Deng Xiaoping, the real revolutionary hero of China and shining star of Sichuan legacy, said in the early 1980’s:

“If you open the window for fresh air, you have to expect some flies to blow in.”

The idea is that economic reform and market economy (fresh air) were essential to China’s growth, but would simultaneously introduce unsavory elements (flies) which had to be eliminated.

The Technical Details of Our Blockage

Immediately after suspecting we were being blocked we contacted some friends who helped us investigate the details of the block (thanks, you know who you are). It turns out that this was a DNS Poison attack which confuses the servers which translate ChengduLiving.com into an IP address, sending you to the wrong destination. This results in a page not found error. The website is exactly where it should be, but you’re being intentionally directed to the wrong place. Because this type of attack is linked to our domain name, there isn’t much we can do but hope that it gets unblocked.

In the last day we’ve talked to some more people and have some leads on a solution. It might be possible to overcome the block, but there’s no way to be sure. When we have more information, we’ll share it.

Update: Chengdu Living has been unblocked, at least in some locations. We aren’t sure how long the site will remain accessible without a VPN.

Since China’s major internet service providers are all state-owned, pushing a DNS Poison attack through the thousands of DNS servers across the country is very possible. However, you can avoid using their DNS servers complete and easily by using OpenDNS or Google Public DNS.

Whether you’re using a Windows or Mac computer, switching to another DNS server is easy. For me, I opened System Preferences, clicked Network, then Advanced, and entered 8.8.8.8 into the DNS tab. Here’s an image to illustrate:

Three Reasons to Continue Despite the Block

We’ll continue to publish content on Chengdu Living and build the audience as we’ve been doing. Here’s why:

We’ve long been advocates of using a VPN because such an enormous portion of the internet remains inaccessible to surfers in China without one. If the internet is anything more to you than a conduit for email, we believe it to be essential since more and more of our lives move online every day. With that in mind, we have 25 Freedur VPN accounts (3-month duration) to give away so you can get started now if you aren’t already on a VPN. All you have to do is leave a comment below and we’ll select 25 commenters at random to receive free accounts.

Note: Freedur has been generous enough to offer dozens of free accounts to Chengdu Living readers and contributors and we personally use this VPN provider although we think any VPN that works is great. If you have an alternate VPN that works well for you, feel free to post the details below for anyone else who’s interested. If you’re a VPN provider and you’d like to promote your service by allowing us to donate some accounts to readers in China, contact us.

67 thoughts on “Chengdu Living Has Been Harmonized”