The dirty truth about Chengdu Hot Pot is not just that restaurants might recycle their oil or even use oil intended for the sewers, but the unspeakable fact that so-called Chengdu or Sichuan hot pot originated in Chongqing. Chengdu Hot Pot is actually chuanchuan, which is a pot of hot spicy oil filled with skewers of vegetables and meat. The pot of oil is used by all customers, the only thing that is ordered fresh are the skewers, which might help to explain why the taint of recycled “Cancer Oil” did not really put a dent in the city’s hot pot business. Lines still stretch out every day at famous local hot pot restaurants because, for a lot of local people, recycled oil means flavorful oil.

In the mid-1990s, most Chengdunese went to small chuanchuan restaurants, also called xiao huoguo, to get their spicy oil fix taken care of. Although large Chongqing-style hot pot restaurants existed then, they were frequented by the rich and the wannabe rich only. At some point in the 1990s, the city officials began waging war on the streetside stalls and holes in the wall that served Chengdu chuanchuan in order to beautify the city. Chuanchuan spots were notorious for oil slicks and pungent pepper funk clinging to discarded skewers, napkins and bits of bone — locals might have found the seedy feel of chuanchuan at midnight satisfying, but the street cops were ordered to remove these “nuisances” and by the beginning of the 21st century, chuanchuan had been relegated to the back streets of Yulin, the back gates of universities and parts of the north side of the city.

Chongqing hot pot took advantage of the government’s war on chuanchuan stalls and established several restaurants around town that eventually drove out or bought out the few remaining Chengdu hot pot restaurants. Pazi Huo Guo, for example, was a Chengdu establishment run by a cripple (Pazi is Sichuan dialect for wimp, or for someone who is bullied often); the last Pazi Hot Pot left town last year and relocated to Beijing. Pazi was once the king of hot pot in Chengdu, but had lost its crown some years ago when the Chongqing hot pot invasion began in earnest in the late 1990s. Now, a quick run-down of Chengdu’s most successful hot pot restaurants shows the dominance of the city’s ancient rival:

The only surviving Chengdu Hot Pot restaurant able to compete is Huang Cheng Lao Ma, named after the old Imperial Palace torn down in the late 1960’s to make room for Tianfu Plaza.

So to do our part for the city we live in, here is a small list of authentic, tasty chuanchuan hold-outs representing Chengdu to the death:

Qiang Go Go means the corner of a wall, as in, this chuanchuan is hiding in the corner serving up the most delicious skewers in town. They actually hide down a tiny alley off of Niu Wang Miao Street right next to the ICBC Tower. The only way to really find this place is to go anytime from 4pm to midnight and look for the lines of people oozing out of the oily crack in the wall next to the tower.

In true chuanchuan fashion, Qiang Go Go has greasy tables lining the narrow alley all the way to the back end of a residential building teeming with mangy dogs and stray cats trying to get in on the action. They cook their oil on top of the old coal bricks that pretty much went out of style in the city and, other than here, can only be found in the countryside. For old locals, chuanchuan and coal bricks are inseparable and without the bricks, the taste lacks heart. The best stuff to get here are the sweet potato noodles and the cold rice noodles that are dropped into the chuanchuan pot and left to seep while you strip skewers of chicken gizzards, cauliflower and pork bits. Anyone who wants to claim “local” status has to have eaten here. A lot.

This is a closet in the wall with two coolers, two tables and three or four steaming pots of been-chilling hot pot outside on the sidewalk. Young people flock here in the early hours and down a few beers. The after party crowd stays until about 3 or 4am and the sidewalk is thick with skewers and napkins. The draw here is the hearty fragrant pot and the pork rib skewers. Go to the back gate of International Gardens and turn left, walk for two blocks and you’ll see the hot pot steam rising off of the sidewalk.

Once the Belle of the Ball, Yulin Chuan Chuan has lost its reputation as the best chuanchuan in the city. They have locations all over the city and the selection has increased two or threefold as well, but the quality seems to have dipped and, above all, they’ve just lost that lovin’ feeling. Having said that, there is not much better for sobering up and getting ready for bed than a fat pot of meaty skewers and, even if Yulin is now overrun with Chongqing hot pot, the chuanchuan here still have the requisite spice and grease. If you just can’t make it any further, plop down here and enjoy.

Chuanchuan is trying to make a come-back in Chengdu due to the steady influx of small town chuanchuan enthusiasts who were neither driven off of the streets by the government nor beaten into submission by foreign invaders. 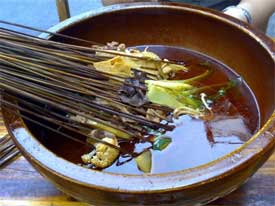 Niu Hua is especially representative of this trend — a delicious and authentic import from Greater Sichuan in to the capital, yet untainted by modern sensibilities. Located near the south gate of Sichuan University, this spot serves up very spicy oil, fresh meats and vegetables and they add their own special Leshan sauce which resembles the green pepper and oil of Bo Bo Chicken pots. The special sauce adds a pop to the oil and somehow makes the whole experience seem refreshingly free of heavy grease. Their chicken and veggies are top-notch.

There are other delicious chuanchuan spots lurking in the shadows of underdeveloped and forgotten nooks of Chengdu. Old women might tend a pot at the entrance to their apartment complex and in some of the city’s side streets you can find a pot or two steaming away. If you happen to come across some authentic skewers, be sure to let us know.