I recently spent a weekend in Chengdu’s neighboring metropolis of Chongqing and was lucky enough to capture a glimpse of this unique city’s past, present, and future.

Chongqing (previously called ‘Chungking’) is famous for all kinds of things: hot-pot, fog, having no bicycles, intense heat, and for being the industrial heart of southwest China. Chungking has a romantic sound – like Peking, Soochow and Hangchow – code for the mysterious Far East. But Chongqing has little of that old world feel to it left these days.

In The Man Who Loved China, Simon Winchester describes how Englishman Joseph Needham landed on the wartime airfield built on a sand bar right in the middle of the mighty Yangtze River. Things have changed a lot since then. Chongqing’s Jiangbei Airport is now a good hour drive outside of the city, and the Yangtze is crowded with barges loaded with cargo heading east to international ports in Shanghai and Ningbo.

Getting to Chongqing back in the “Chunking days” was an adventure; today high-speed rail links between Chengdu, Chongqing and Shanghai make the trip almost an afterthought. Even as little as 10 years ago the trip would have taken anywhere from 12 to 18 hours. The high speed “Harmony Train” stops at Chengdu’s North Railway Station, served conveniently by the Metro Line #3, which takes you directly into the city. Chongqing currently has four lines, but a total of eighteen lines are planned. The above-ground line into town from the north gives you a window into the furious pace of construction taking place all across one of the world’s most populous municipalities. 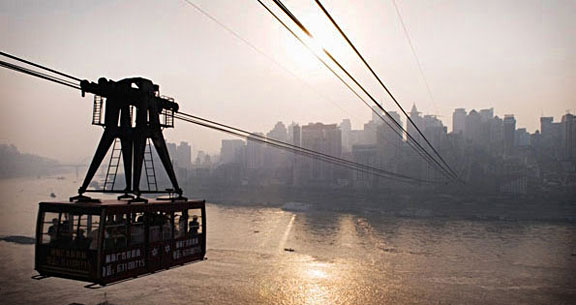 While scanning the cranes and construction sites, I also notice some of Chongqing’s unique geographic characteristics. The city center is built on steep hills at the confluence of the Jialing and Yangtze rivers, creating a mosaic of buildings rising and falling with the ridges that dominate the entire municipality. “Mountain City”, the locals call it. The constricted atmosphere created by the two rivers and construction teetering on cliff-sides funnels the activities of millions of people down into the valleys and gullies of Chongqing.

Heart of the City

The frenetic activity in the center of Chongqing is one of the most intense experiences you will have in China, echoing the teeming laneways on the southern side of Hong Kong Island – surely the most densely populated neighbourhoods in mainland China. The tall steel fences built along the roads to stop pedestrian access reinforce visions of Hong Kong – albeit a more raucous, chaotic, and decidedly messy version.

The so-called “Stickman Army” (???) – migrant workers with poles and rope – roam the informal terminals and the inner city looking for work carrying cargo up and down the steep steps. For a moment you imagine that you are standing in the middle of activity that is at least a thousand years old – farm products being transported further down the river and manufactured products arriving from the east – but will these terminals and the Stickmen have a place in future Chongqing?

Clues to the Past

Around the city are remnants and echoes of the rickety white-walled multi-storied timber houses for which Chongqing was once famous. An informal marriage market is hidden under a bridge between two such neighborhoods. Hundreds of parents equipped with documentation about their children, enjoying rare sunny weather and just doing their job.

We decide to explore the old port district of Ciqikou where they once made porcelain. The last stop on Metro Line 1 heading west is the closest station to Ciqikou, but we find – to the great amusement of the ladies at the ticket counter – that the station does not yet exist, despite government maps stating otherwise.

We end up in the Shaping Ba district of Chongqing instead. This suburb is far to the northwest of the city center, but when we climb to street level it is although we had never left the city’s heart: raucous noise, a suffocating ‘sea of people’, and bumper to bumper traffic. When we finally make it to Ciqikou, we find nothing resembling the old porcelain factories that once defined this district. The place is a bit like Chengdu’s Kuanzhai Alley: a tourist site half-heartedly replicating the traditions of old.

Chongqing is something of a ‘sister city’ to Chengdu, once vying for status as the premier city of Sichuan. The same language is spoken, the cuisine is similar, and the people of each city have entrenched opinions of each other. We wrote once that Chengdu is the nobleman to Chongqing’s blue collar laborer. How has it changed? 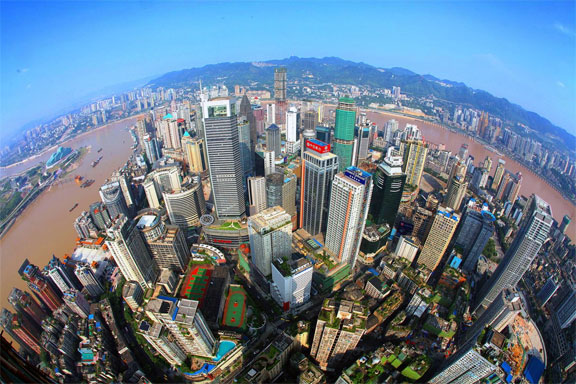 Both cities are putting their heart and soul into modernization. Both are tunneling furiously in order to deliver a modern metro system; office towers and apartment buildings are reaching for the sky, vying for foreign investment.

Chongqing, however, has serious geography to deal with: Infrastructure is bent to shape to the confluence of two major rivers. Housing clings precariously to the sides of steep hills. Buildings and freeways hang out over the river banks (Blade Runner-style flying cars would not surprise.) By comparison, Chengdu spreads more comfortably over a rich fertile plain. 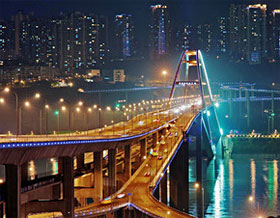 Chengdu has a fat, easy lifestyle, compared to the stresses and strains in Chongqing where it seems that everything could unravel at any second. Chongqing, perhaps more than any other Chinese city, embodies the tension between the ancient and the modern.

It feels like everything and nothing has changed: Chengdunese lounge at dusk playing cards and Chongqingnese break their back over the last shipment of factory goods before enjoying hotpot.

19 thoughts on “A Glimpse of Chongqing’s Past, Present, and Future”