This is the twelfth installment in a series about giving birth and raising children in Chengdu, you can find the previous post here: Raising a Child in China: Two Worlds or the entire series here: Chengdu Living Series.

People who have no children (and all Chinese) tell me that raising a child is expensive. I would hear the phrase “baby gotta eat” in my head and think of diapers whenever someone spoke about the financial burden that children place upon the Unready. But for the past two years I have found that children really aren’t that expensive. My kids eat leftovers, basically, or drink mama’s milk; diapers aren’t that expensive and I’d say 1/3 the time we just end up washing soiled clothes. The biggest kid-related expense so far has been plane tickets. So by that rationale, breastfeed and use open-butt pants, and you should be fine.

But two years is now slowly approaching three, and I sense a financial burden in my future. A burden which may just last for the next 20 years or so and give true meaning to the phrase “baby gotta eat”. That burden is, of course, the boy’s schoolin’. If I could get freaky with a principal I would, but China doesn’t work that way. The most I could get through offering up my body is a very small discount. Kindergartens (and school in general) are in extremely high demand in China and, like all industries, the education industry raises prices to accomodate demand. 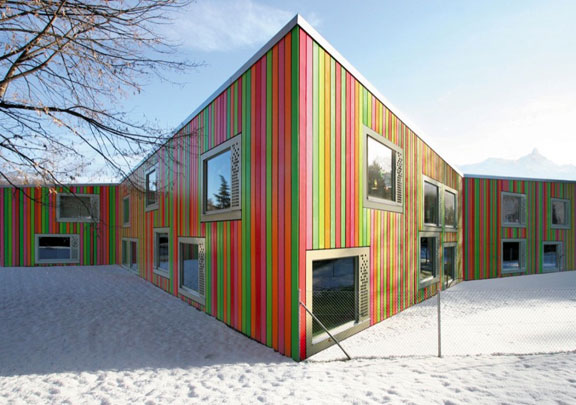 Besides this looming financial burden, a lot of other things converge when a kid turns three. I have discerned two trends, but there are more, if you look hard enough.

One inexorable movement is the slowing of a parent’s motors. By three, moms and dads are just plain exhausted. We’ve been wiping this kid’s butt every day, several times a day, and then dealing with all sorts of ridiculous demands, like: Play with me from 6am to 11pm non-stop and then sway to my nighttime screaming like that caterwauling was Cee-Lo dropping another babymaker. By now, all we (or better put moms) want, is some time away from the beautiful, adorable spawn of our loins.

Concurrently, kids are getting bored with parents. We don’t play that much anymore, we refuse to wipe dirty butts, and when kids scream we scream back. By this point, kids start needing playmates. When my son sees a girl or boy his age he immediately starts grinning and he sidles up to say hello. He might even offer a toy or a piece of mantou he picked up off of the floor. And if the kids determine that they can play together, then the shrieking and scampering starts and doesn’t end until one or both throws a tantrum.

So there really is no choice. It’s either kindergarten or insanity. I’m on the fence, but my wife has already chosen her kindergarten and is merely waiting for me to accept reality.

When I stood outside of the Waldorf Kindergarten and watched the kids play there, I felt something magical happening. The playground is simple: sand, some water, and several simple wooden structures. Every space had a child or three chattering about something. Groups were digging in the sand and filling up pants pockets and perhaps a bucket, older girls were supervising small chains of boys carrying water back and forth, older boys marched through the playground with some sticks as the lil guys and a few lil girls followed single-file. It looked and sounded like a Mark Twain story dusted with Japanese fairytale magic and a pinch of Peter Pan. 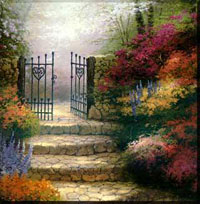 I stood there for a while and just watched them, dreaming about my own days as a kindergartner in Bremerhaven, Germany and imagining what it would be like for my boys. I may have caught the Waldorf Kindergarten on a good day, but the impression stayed with me and now as we look for a place for Dorian, that afternoon last spring serves as a benchmark.

Unfortunately I am not the only one who feels that way about the Waldorf school. The waiting list for the kindergarten is years long (many parents joke that you should sign up as soon as you find out your pregnant), and the Waldorf School is far away, over the Third Ring Road. But the magic of that school has given birth to a mushrooming development across Chengdu and other cities in China: the ?????, or Home Kindergarten, which takes the philosophies of the Waldorf School and tries to implement them in small settings, small kindergartens.

There are several around Chengdu – perhaps a few dozen – and more than 300 across the nation. Some of the Home Kindergartens existed before Waldorf, and the teachers just took on some Waldorf sensibilities, while others were established after teachers came into contact with Waldorf and decided to try it on their own. The Home Kindergarten trend is demand-driven, so you will find both opportunists and visionaries.

But what exactly is the demand?

A Garden for Children

Many of you already know this, but Kindergarten is German for “A Children’s Garden,” which is a perfect description of what “school” should be between the ages 3 and 5 (and forever after as far as I am concerned …). In China, schools are anything but a garden. Most public kindergartens are crowded and understaffed, infused with Communist Party values, and strangled by an ethos of achievement that has 2 year olds learning how to read and 3 year olds starting math. The pressure leads to unhappy children and stressed out teachers. The extreme end of this type of system can result in some twisted scenes. 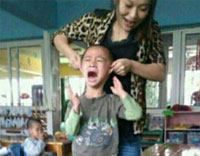 I feel for them. I went to public school and I turned out … fine … and I am sure most Chinese who go through the school system here come out the other end ok, but I am not trying to put my son through that system. Things should be better for the son than for the father, and this sentiment actually drives both the rigor of the public schools and the rise of the home schools.

Affluent, educated families run by Chinese mothers who have been branded Tiger Moms are shunning the public schools for other options. They’re starting to want gardens for their children too – or at the very least environments where they will not be beaten, harangued or otherwise abused. Achievement has not taken a back seat to enjoyment by any means, it just seems as if Chinese moms are realizing that drilling a kid from dawn to dusk may not be the best way to help him get ahead.

For us, the decision is still ongoing. Waldorf is too far away and we aren’t on the waiting list, and public schools are out of the question – not just because of fear of violence, but also because Dorian might face some “Mixed Blood Prince” issues there that we would rather not have to deal with down the road. The international schools are too expensive for us – the cheapest option that I know of is QSI – and we actually have become slightly enamored with the Home Kindergarten idea and movement. Home Kindergartens are often run by local moms taking the issues into their own hands and trying to create a better life for their children. They are often very serious, very dedicated, and very earnest about what they are doing.

When I went to visit one of these kindergartens, near Chengdu Gardens in the west side of the city, it felt a little like that magic we were looking for. The gate opens up on a small playground, covered in sand, rocks, water and wood. A beautiful house with a closed porch and shuttered windows beckons toward the back. The kids were welcoming and Dorian immediately scampered off and forgot about us. The teachers also seemed very sincere.

When my wife asked other kindergartens when kids should start, the answer was all too often, “whenever they can eat and pee by themselves,” which is actually about the teacher’s comforts, and not the child’s. The teachers at the Home Kindergarten we visited did not seem eager to accept any child under three, because, as they said,

“Kids need to be physically and psychologically ready for kindergarten, not just thrown in for everybody else’s convenience”.

And that resonated because both we and the boys are moving toward that date, when we can spend a full day apart and feel good about it. But Dorian still loves to kick it with Dada and Mama, and although he might be a pain in my ass sometimes, it would suck to have him gone all day. Soon enough. By the time the boy turns 3 in February, it might just be time to send him off to the Garden to grow up like all the other kids.

What about you? Where do your children go to kindergarten? What are your experiences and recommendations? Let us know in the comment section.

12 thoughts on “Raising a Child in China: Choosing a Kindergarten”