This guest post is published by Jons Slemmer, a Dutch on-and-off resident of Chengdu for 8 years who works in the software industry. The post below includes both a Youtube clip and Google Map, so if you’re in China, you will want to have a VPN open to see all the content on the page. 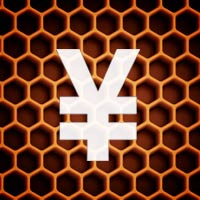 I first visited China and Sichuan province long ago, in 2007. Like many of us, I quickly fell in love with the people and the place. I have been coming back to Chengdu and its surrounding areas once or twice a year since that first visit, all the way from the Netherlands, where I still run a web development business. In early 2014 I finally made the decision to relocate to Sichuan and adventure even deeper into the wild west of China. Among the things I discovered even before my move was that a crowdfunding campaign deep inside Sichuan Province was underway, to build a honey cooperative. I was fascinated.

It was nearly two years before I made the move to Chengdu that I came across the crowdfunding campaign on Indiegogo seeking financial support to build and promote a honey cooperative in Baoxing, a sleepy town in rural Sichuan. The reason they were doing this was to create a sustainable and profitable way for the local community to make a living by promoting local ecology.

Why honey production? As stated on the crowdfunding campaign, “honey production enables the rural population to improve their livelihood in a way that protects the surrounding fragile environment, by providing an alternative to illegal forestry.” Here’s the original pitch from the organizers, hosted on Youtube:

The campaign started early in 2013 and during the process Ya’an – of which Baoxing is a part – was struck by an earthquake, the second in five years. The role of the campaign then changed slightly in order to support the affected regions near Ya’an which had lost many of the existing beehives. I quickly pledged my support and became even further committed to the fate of this far-away honey co-op. Here’s a Google Map which shows Baoxin in central-Sichuan Province, and its geographic relation to Chengdu:

The campaign was successful, raising over $10,000 USD in a single month, enabling them to purchase and transport 114 beehives to the small mountainous villages around Ya’an. The beehives were distributed among 38 different families, each receiving three beehives, helping these rural families supplement their yearly incomes. I was amazed that they had managed to raise awareness of co-op on an international crowdfunding site like Indiegogo and wanted to learn more.

Two years after my pledge to the campaign and I find myself living in Chengdu and within traveling distance of the Fengtongzhai Honey Cooperative. So during the Labour Day holiday, I traveled to Baoxing and met with the head of the cooperative to visit the site and witness the honey harvesting process.

As it turned out, getting to the site was no small feat.

It took 12 hours door to door to get to Baoxing from Chengdu on Labour Day Friday. Under normal conditions it would be a quicker journey, but it was still a journey. Unable to purchase direct bus ticket to Baoxing from Chengdu, I had to take a bus to Ya’an first and then transfer to Baoxing. The direct road to Baoxing from Ya’an is still under heavy construction due to damage done in the 2008 and 2013 earthquakes, making it a one-way potholed dirt road, with traffic only allowed from Baoxing to Ya’an. So the bus driver had to travel in the opposite direction on the highway for nearly an hour, then turn back around onto a small dirt road along a river going back north in the correct direction. This detour added about 3 hours of extra travel time. In the image below, I have highlighted in red the “original route” before the earthquake hit.

We spent a night in Baoxing city, continuing on the next day to where the co-op is located. Baoxing city is currently being completely rebuilt into what will be called the “Ancient Panda City.” It’s a typical tourist trap whose “ancient town” facade is in mid-construction.

I and several others traveling to the same area in a shuttle van cramped with chickens, hunks of pork and compost bags. We were dropped off along side the road where the chairman of the cooperative picked us up and took us even deeper into the mountains.

Baoxing and the surrounding villages are located in a mountainous area along the Qingyi river, with towering cliffs on both sides of the gorge. It’s a beautiful area, typical of the rest of the rural mountain areas I have visited in Sichuan. When finally turning of the main road following the river and bumping around on the dirt roads leading deeper into the mountains away from the river, the scenery transformed into one amazingly green and lush. A far cry from the grey landscape which I become accustomed to facing in Chengdu.

Baoxing Village is small and charming, comprised mainly of stout farming houses surrounded by lush greenery. Walking amidst the wild growth in this mountainous habitat, you feel close to nature.

Finally, after this long and arduous trip, I found what I had come here for: the honey cooperative and the honey harvesting process. When we arrived, locals showed us around the small mountain village and guided us toward their beehives. There were 35 beehives buzzing with life in a small garden area, no bigger then 50 by 10 meters. Bees coming and going, dutifully doing their job. It was a remarkable sight that I had come a very long way for.

While sipping on some local tea, we were introduced to local farmers and the honey harvesting process. The process is surprisingly simple. 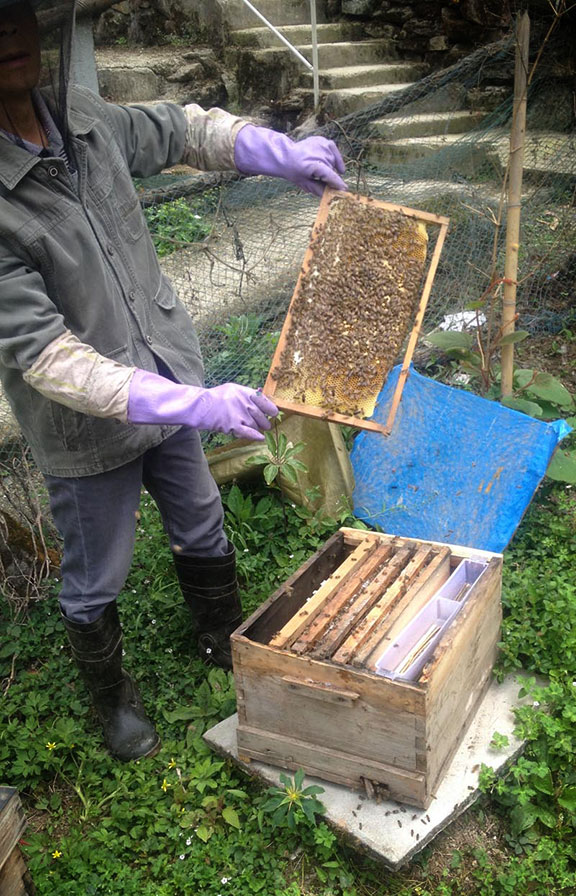 Step #2: Spin the honeycomb around a small centrifuge 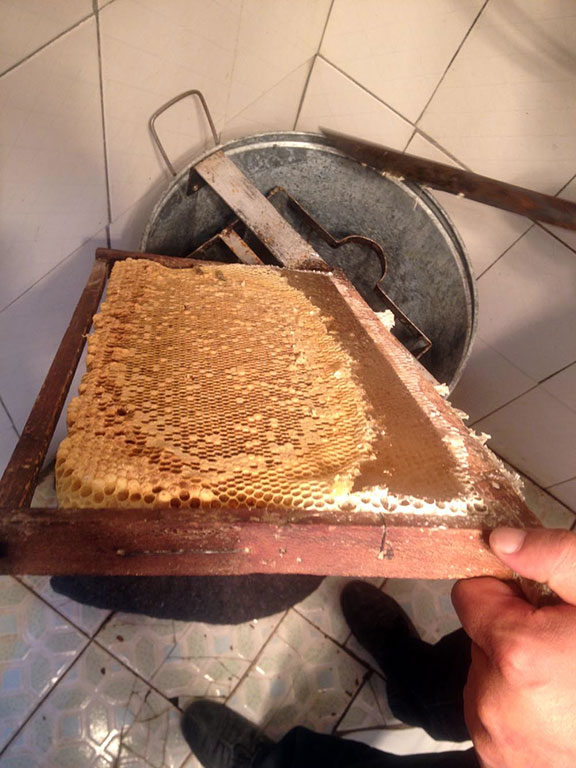 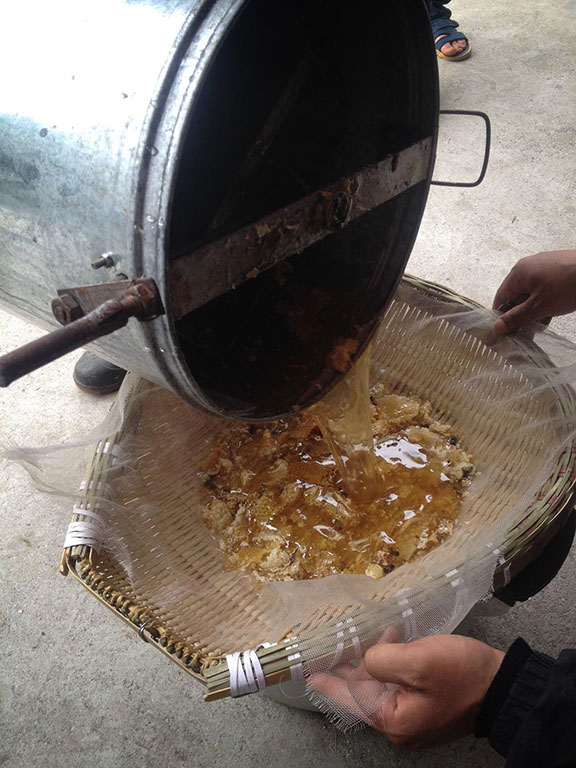 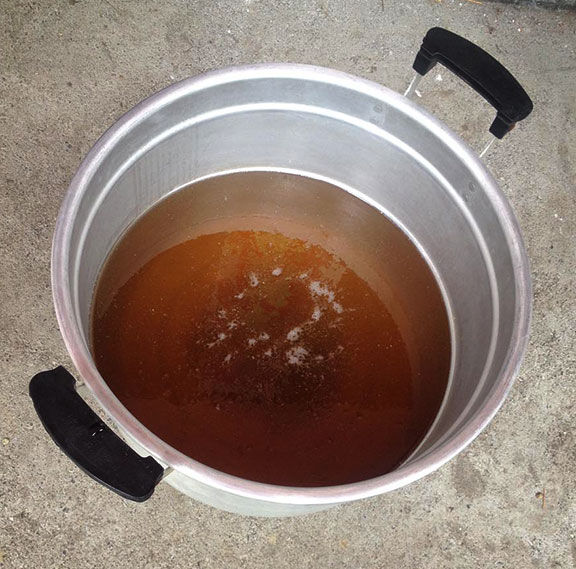 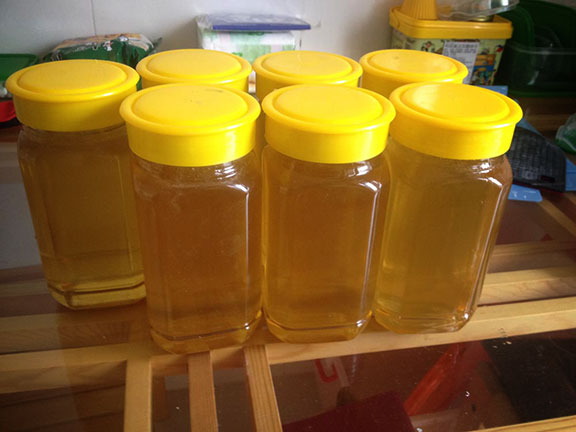 After jarring all the honey up and enjoying a quick goodbye lunch with cheery locals, we were brought back to the main road to begin our journey back to Chengdu.

Local Funding for Bees and More

On my return trip, my mind wandered thinking about what else remains hidden in a region that so few people visit. The region feels alive and well, despite a spate of recent and devastating earthquakes. To be certain, the enormous influx of government money which has been distributed in this region has changed the fate of many of the humble and soft-spoken farmers who call this region home.

According to information I gathered from organizers, the cooperative has been stable since the beehives were donated back in 2013. Their steady progress – they are still expanding – makes this a significant story of success for the locals who’ve been touched by these efforts.

Since this crowdfunding initiative was launched and successfully funded, an entirely new website has emerged in Chengdu to promote and fund local ventures to improve communities. The website is called Zaomengshe (???) which means in Chinese a “society to make dreams” and has already funded hundreds of local cultural projects.

What other social initiatives are there or could be beneficial to Chengdu or its surrounding area? Let us know in the comments below.