Only a few hours away from Chengdu in the sprawling metropolis of Chongqing, the former police chief has been sentenced to death. Wen Qiang, 55, was found guilty of protecting five organized gangs, accepting bribes, rape and property scams. Chongqing has long been known by locals and foreigners alike as a cesspool of crime and corruption due in part to its huge population and quick rise to prominence. Still, the death penalty issued against the police chief is a stern warning to the city’s gangsters that have long held a tight grip on the city.

Citizens are demanding nothing less than the death penalty, and can you blame them? Qiang is more of a career criminal acting as civil servant than officer led astray by power and responsibility. Hundreds waited for the guilty verdict outside of Chongqing People’s Court #5, and cheered jubilantly when his imminent death was declared. In true gangster fashion, Wen remained silent during the proceedings and maintained a straight face when the death sentence was delivered. He was described by witnesses as “Soulless” and crowds chanted “Kill him, Kill him!” as he was driven away from the court house in a police escort. And the policemen charged with carrying Wen weren’t those that were loyal to him during his reign on top — those had long been ousted in the gang-busting raids which took place all over Chongqing last summer, netting over 3,000 suspected gangsters.

“These recent efforts have gone a long way to restore the public’s faith in the judiciary” Says bystander Wang Meng. “I’m so happy. Death for Wen is justice served.”

The Death Penalty in China

These crimes are those which certainly can carry the ultimate penalty in China, and these sentences (along with another recently issued in involving a state-bank VP) have put additional focus on the number of executions that China is performing. By most estimates, China is among the world’s leaders in capital punishment, but it says that it’s working on reducing that number. Unlike most of the rest of the world, China performs executions quickly, after an expedited double appeals process. After that, the final blow comes in the form of a single hollow-point bullet to the head, or lethal injection in one of China’s ultimate punishment mobiles. Non-violent crimes such as drug smuggling carry the death penalty (even for foreigners), and even theft and tax fraud can get you officially offed. Sympathizers often point to China’s less-incriminating per-capita execution statistics, which rank it below Iran and a host of Middle East nations like Jordan, Kuwait and Iran.

Keep in mind that official statistics don’t exist because the actual number is classified as a state secret. 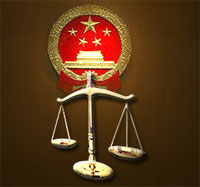 With this sentence, locals have high hopes of the government continuing to do its job of cleaning up the city. It demonstrates that the government is willing to act boldly in its ambitious effort to clean up the moral decay in some of its largest cities.

“Chongqing has long been known as a hotspot of organized-crime”, a Chongqing-native living in Chengdu tells me when I ask him about this news. “Maybe this is a genuine effort to clean up the city. But, maybe not,” he admits.