There are many sensitive topics in Chinese discourse and few more sensitive than the edifice known as “Chinese culture,” so it’s no surprise that Chinese are hashing out the implications of another smash hit involving Chinese characteristics to come out of Hollywood, Kung Fu Panda 2.

Disregarding self-aggrandizing lunatics like Zhao Bandi, the discussion online (where discussions are their most “public”) revolves around a few questions:

Let’s take a closer look at these questions below:

If You Have to Ask …

For many commentators, the answer to the first question is simple. Censorship, rote learning and a politicized movie industry prevent great works with international appeal from coming out of Mainland China — Farewell my Concubine being one notable exception. Posts like this on Douban are representative of this view:

Last night I read online that the State Administration of Radio, Film, and Television pushed Transformers 3 and Harry Potter 7 to later time slots in order to protect Beginning of the Great Revival, I thought to myself, the Mainland wouldn’t hesitate to do such a thing. No matter if it’s true or false, everyone should think about it. Killing dis-harmonious elements and blocking outside forces as a means of weaponizing the cultural realm will ensure that we never create inspired work.

There are other works which follow the same theme, like writer NanQiao for the Oriental Morning Post’s, “A Look at How Hollywood Plays the ‘Chinese Elements’ Card,” which also goes a bit deeper into the issue. He begins by asking the question that every Chinese engaged with this topic is asking:

From Mulan to Kung Fu Panda, how come others can take our culture, turn it into a tasty meal and sell it back to us at a profit? 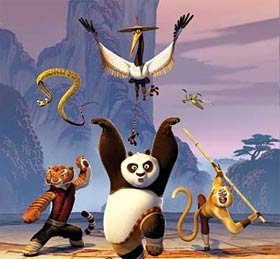 It seems that “stealing culture” is not the only thing that galls. When Hollywood (i.e. foreigners) can profit off of stealing culture, then the discussion becomes heated and a solution must be found. NanQiao is not the only one mentioning the profit issue. Virtually every discussion mentions that “they’re making money off of us” — this is a very important aspect of the discussion because the importance of profit can come from a few different points of view:

NanQiao answers his question by discussing “cultural strength” (????) and the ability of Hollywood to recognize and synthesize (what Americans feel to be) worthy cultural elements into a seamless narrative and the inability of Chinese films to do the same:

When we speak of “cultural strength” things get blurry because it is the perception of value that determines something’s worth. Chinese are not sure what has value and what does not, whereas Americans seem to have a much clearer and more confident idea of what holds value. This has contributed to the success of the movies.

For NanQiao, a clear and confident idea of what is culturally valuable determines a culture’s strength vis a vis another, therefore America’s clarity and China’s confusion lead to an imbalance in cultural strength ie much higher profits for Hollywood movies.

Chengdu in the Limelight

For the answer to the second question, lets first take a look at Chengdu’s reaction to the movie. The first Kung Fu Panda movie came out in June of 2008, not even a month after the Wenchuan Earthquake. At the time Chengdu was very worried about its image and as tourism numbers fell to 2003 levels, they were looking for something to help reverse the bad press.

So they extended an invitation to Dreamworks CEO Jeffrey Katzenberg and his team to come out to Chengdu and see what a real panda looks like. Katzenberg immediately agreed and took a trip out to the Panda Breeding Center (who promptly named one of their pandas after Po). During the making of Kung Fu Panda 2, the municipal government again extended an invite and the whole film crew including art director Raymond Zibach visited the city.

They stopped at Kuan Zhai Xiangzi, Qing Cheng Mountain, Dujiangyan and Jinsha (slurping up some noodles and hot pot along the way). The story was already done by the time the team arrived in Chengdu, but their experiences in the city inspired them to re-do some of the animation and insert dandan noodles, elements from the breeding center and Kuan Zhai Xiangzi and a lot of the scenery from Qing Cheng Mountain.

The city of Chengdu practically gloated over this “free press” — in an article written for China Business, Peng Ge and Pei Yu elaborate on the efforts by the Chengdu Municipal government to get elements of the Du into the movie:

The invitation that led to the film crew coming to Chengdu was a planned effort to promote the city. Through the appearance of many elements of the city of Chengdu in the film the whole world was able to gain an impression of the city. A group of more than 100 people exists within the government whose sole job it was to promote Chengdu through this movie. This is a plan that was carried out over 3 years, but did not cost a single penny.

The authors go out of their way to show that the government did not spend a single penny on the “free PR” they received from the movie, despite mentioning a “person in the know” who said that the cost for this PR was around the RMB3million mark. It is safe to assume that the government expected to pay for having parts of Chengdu’s culture portrayed in the film, because Hebei Province happily invested in the movie Aftershock, about the Tangshan earthquake of 1976. So when Katzenberg said that he would put scenery from Chengdu into Kung Fu Panda 2 “as a gift to the children of the disaster zone” and when Zibach gushed that “I was so delighted and moved by Mt. Qingcheng that I insisted it be a major feature of the sequel,” the city of Chengdu was taken aback:

Chengdu officials met with the film people for dinner in Kuan Zhai Xiangzi and Jeffrey Katzenberg came out directly and said that he would put elements of the Chengdu into the movie. The officials were surprised because they assumed they would have to pay out a large sum of money in order to have that happen.

For the Chengdu government, Kung Fu Panda and it’s sequel are direct representations of the culture and beauty of the city. The pandas, the mountain scenes, all of the streetside vendors — according to their PR releases, these were directly inspired by Chengdu. The government’s goal was PR and ultimately profits, so for them the elements of China within the movie were not only adequate, but outstanding (in part because they “didn’t cost a penny”).

But for many netizens, including NanQiao, Kung Fu Panda 2 is very much an American movie and lacks the strong ties to Chinese culture that the first installment had. The jury is still out.

The scenery and setting were very Chinese, but the main character Po is very American. The peacock and the Master are quintessential Chinese characters, but the heroic stand at the end is considered an “America! F*ck Yeah!” type of moment, even though Po used Qing Cheng Mountain Tai Qi. All across the web there are comments that range from “They know us better than we know ourselves!” to “It’s an American kid dropped into the middle of China!”

As we can see here, there seems to be a disconnect between what is and is not Chinese culture and what is and is not valuable. For the city of Chengdu and Hebei Province, PR and the possibility of increased tourism adds value to the cultural elements within a film; for the average Chinese netizen, the answer is still unclear.

For years Chinese have been told that their culture is not only unique, but that nobody else out there can really compare with or even fully comprehend the depth of China. When Chinese find out that, actually, some things are universal and that, yes it is possible to understand the deep values of Chinese culture precisely because they are universal then a whole new round of soul searching ensues.

Laughter is universal. When I watched the movie last weekend, I laughed my ass off and so did everyone else in the theater. Even when the jokes were pure-Jack Black slapstick.

Pain is universal. When Po’s mom left the little guy and he said “mama?” the whole theater fell silent and I felt the tears come. Somebody nearby was sobbing.

Inner peace is universal. When Master Shifu catches a drop of water off of the cliff face and guides it intact onto a leaf, demonstrating the power of inner peace, I knew exactly what he meant, even though I am neither Taoist, Chinese nor a Tai Qi master.

These elements were placed within a Chinese context and nothing more. If anything, the scenery itself helped bend the American cultural elements within the film, not the other way around. As I left the theater last week, I asked one of the ushers if he had watched the movie and he said of course several times. Then he said:

You Americans probably don’t like this movie much, because it stresses the power of the group over that of the individual.

I could only smile at the irony there.

Kung Fu Panda is a movie that is first and foremost a Creation, inspired by the very best of China. Perhaps the discussions the film has engendered across the Chinese blogosphere will lead to a clarification of what is truly valuable about Chinese culture.