In recent years it’s become more and more difficult to flag taxis in Chengdu. If you’re coming from a busy area like Chunxi Lu or a remote area like the Tianfu Software Park, you can be waiting a long time. Over the last year I’ve taken to riding my bicycle (an amazing fixed gear bike built by Natooke in Chengdu) as often as possible, but in some situations only a taxi will do. In those situations, I’ve begun using an iPhone app called Didi Taxi (???? dí dí d? ch? in Chinese) to effortlessly flag taxis, even during rush hour. I find it to be pretty amazing (and so do many others apparently, since they just received $100 million in funding). Here’s how it works.

Didi Taxi in a Nutshell

As you read this, there are hundreds of taxis driving around Chengdu with Didi Taxi enabled, usually running on a smartphone that’s mounted to their dashboard. After you’ve completed the quick setup procedure on your smart phone, you launch the app and can see these taxis driving around you in a 3D map view, in real time. All you have to do is send a quick voice (or text) message stating your destination and a car will be on it’s way to get you, usually within seconds.

Once a driver has answered your call, it will be highlighted on the map and information like their distance from you and estimated time of arrival appear on the app. In most cases, all of this happens within 10 seconds. It’s amazingly fast.

As I write this (sitting in The Bookworm), I launched Didi to see how many taxis were nearby. The screenshot on the right of my iPhone shows how many taxis are nearby. As you can see, the map is filled with them. Super convenient.

Using Didi For the First Time

The setup procedure is simple enough: when you launch the app for the first time you’ll bind your phone number to the app by receiving a text message and inputting a four-digit code into Didi. With your phone number bound, taxi drivers can (and will) call you on your phone to confirm your location. These are generally 10-second long “I’m at the intersection, where are you?” calls.

Once you’ve gotten in the taxi, information like the drivers name, license plate number, and reviews will appear. These are Yelp-like reviews of service, speed, and friendliness for each driver. You can see reviews and star-average for each driver, which is nice and surprisingly useful compared to the useless star rating which taxis have implemented for years (similar to the also useless star ratings you find for tellers inside Chinese banks).

As with a lot of China’s best services (Taobao is the first one that comes to mind), Didi Taxi is only available in Chinese. There is no English version sadly, but don’t let that discourage you because there is very little Chinese that you’ll need to decipher in order to use this service. In my usage I’ve noticed that drivers frequently call me after I’ve requested a pickup, so basic listening and speaking skills will help. 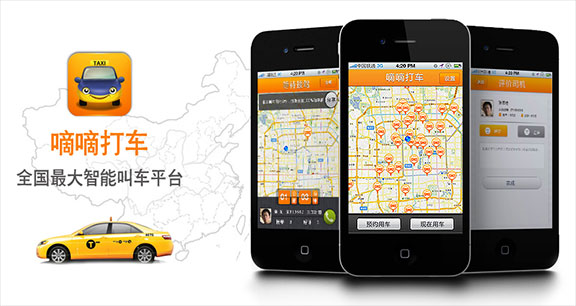 As a bonus, I have noticed that drivers located this way are especially friendly. I believe this may be due to the eliminated anonymity of taxi drivers. When you can address them by name and their performance is being tracked, they’re a lot less likely to trick you, cheat you, or act rudely.

One other feature which I’ve found hugely helpful is scheduled pickups. You can request a taxi immediately, or specify a time and place to be picked up. This is really handy if you have to be somewhere at a specific time – let’s say you have a flight to catch and you don’t want to worry about jeopardizing your flight by fruitlessly hunting for taxis during rush hour. Arrange to have a taxi pick you up at the specific time and place. Problem solved.

The final feature that I found notable is tipping. You can optionally add a tip of 5 – 20 rmb onto the normal fare, which might help you locate a taxi during the busiest of times. I have never had to use this feature, but I imagine it might come in handy if you’re looking for a taxi during rush hour downtown. I’ve certainly been in situations where I would happily pay an extra 20 rmb to find a taxi immediately.

I still think that a bicycle is the best way to get around Chengdu. But if you’re going to the airport, traveling a long distance, or have heavy cargo to carry with you, using Didi Taxi can save you a lot of time and hassle. As the number of cars in Chengdu has increased and traffic has grown to be more of a headache than ever before, there’s never been a better time to take advantage of convenient loopholes like this.

Visit the Didi Taxi Official Website or download the app on the iOS App Store or Google Play. Have you used Didi Taxi or have another app which has made life in China more convenient for you? Leave a comment below!