From the outside looking in, China seems to be a violent, seething mass of anti-Japan warmongers. Photos of the anti-American protests blazing across the Middle East are interchangeable with Japanese cars burning, as Arab and Chinese mobs chant and hold up placards in the background. But unlike the protests in the Middle East, which have already claimed dozens of lives and reflect the true rage of the street, the protests in China are much more of a spectacle.

There is definitely a hard core element in every protest in every city across China, but many on the street whisper that the loudest protesters are “brought in on buses”, or paid thugs, or police in disguise. A large chunk of the crowds is often just “watching the action” (??? in Chinese). Even if the rumors are untrue, the fact that they’ve spread from the street to the microblogs and back is evidence that most of the country’s average men and women don’t have their hearts in the latest outpouring of jingoistic nationalism. That is not to say that Chinese do not wholeheartedly believe that the Diaoyu Islands belong to China or are any less determined to wrest them from Japan; most Chinese just aren’t into smashing, looting and burning in the name of the Motherland.

The Anti-Japan protest in Chengdu on Sunday, September 16th, was more of a cancelled pop show than a violent, torrid outpouring of anger and nationalism. Marchers began their trek to Tianfu Square near the American Consulate on the south side of the city, but were soon corralled and herded away by hundreds of police in slick black raingear. After the crowd was dispersed and sent north towards the city center, the police jumped into buses and headed downtown, where they closed off Tianfu Square, shut down the Tianfu Square metro station and kicked protesters out of Chunxi Lu.

Clumps of people gathered around the square and craned their necks and ears for any sign of the protests, but when nothing happened, most people shrugged and went about their business. The Starbucks was full of smartphone surfers, and the girlie-malls around Yanshikou were packed with teeny-boppers. If it hadn’t been for the police lining the overpasses and intersections near Chunxi Road – the pedestrian-only shopping district where similar protests in 2010 reached a climax around the Japanese supermarket Ito Yokada – the whole scene would have looked quite familiar: people shopping on a gray, drizzling Chengdu afternoon.

When the actual protest finally came into view, it was a depleted mass of people, perhaps 1,000 strong, herded by police on motorbikes. Gawkers pulled out their phones and took pictures while the protestors sang the national anthem, called for boycotts of Japanese goods, and chanted “China deploys the armed forces to beat the little Japanese!” There was one picture of Mao toward the front of the protest and two vehicles with anti-Japanese slogans plastered across the doors.

The marching, placard waving protesters were made up mostly of men, but many girls chanted arm in arm with each other, high voices ringing out over the crowds. Most of them looked to be under 35, with a heavy sprinkling of Post 90s and late Post 80s (aprox. 20-35 years of age).

Although passionate, the protest was controlled and short-lived. Unlike other Anti-Japan protests across China, there were no incidents of looting, burning or smashing. The heavy police presence was without question the biggest factor reducing the scope of the marches, but the constant drizzling also put a damper on things. But in conversations on the subway to the protests, along the marching lines and on my way back home, I got the impression that it may also be due to growing number of Chinese who see through the blatant red herring of the Diaoyu Islands and the callous manipulation of public opinion by Party apparatchiks. A large part of the general population doesn’t really care about islands, nationalism or Japan at all and many of those who do care passionately are nevertheless quite polite, friendly, and adamant about their positions. 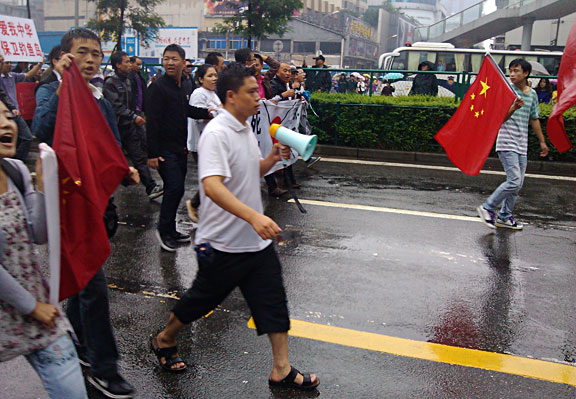 I was heartened by several conversations I had Saturday night and throughout Sunday with people who, once they left the warm embrace of mass chanting, found themselves sheepishly admitting that they held no real violent thoughts toward Japanese. It’s a big show after all and nobody had anything else going on on Sunday … so why not join in?

To Lose a Friend

Last Friday I met up with a friend of mine, a young Chinese man from Chengdu, and we talked for a few minutes outside of my office. He studied abroad, worked for a TV station in the US, and routinely calls out local politicians and society in general for being duplicitous and unjust. He always seemed to see through the lies, until this whole Diaoyu thing came up.

“F*ck all Japanese! Dogs. We’ll nuke them if they try anything. And you Americans better watch out too. Help Japan and it’s all bad for you.”

I looked at him like he had just lost his mind. My eyes went wide and I raised my eyebrows as far as they could go.

“Have you lost your mind?” I asked him. “Since when are you a rabid fenqing wumao? Since when can you let a dispute over oil pull you into this type of diatribe? When did my homie trade reason for madness?”

He seemed shocked at first, like I had just doused him with cold water. He mumbled, I mumbled and then we just moved on to another topic. To me, it seemed as if he had truly lost his mind and found himself spitting out whatever he had heard someone else say, without giving it a moment’s thought. Perhaps to him, I seemed like a traitor for not supporting China’s claim to the rocks sitting atop a bit of gas and oil.

The encounter put me in a foul mood, because I thought that most of the educated youth would not fall for the nationalism card, at least not anymore. I believed that, although apathetic and not really interested in struggling for a change, the new youth of China are anything but stupid. Saber rattling to distract from real domestic problems might get some people on board – the bored, angry, poor males – but most of the nation would still be able to see through it.

After I took leave of my friend, I thought to myself, this is what Hong Kong struggled against: the ability of the Party Machine to press a button in everyone’s head and make them go rabid at a moment’s notice (and, when the moment has passed, to push the off button as well).

Then, a few hours after my friend rattled me so with his rabid parroting of the Party Apparatus, I was told by a different friend that:

“The mood seems real to you, because you let it in”.

He meant that by accepting or acknowledging nationalism and brainwashing as fact, I made it so and ruled out other possibilities. We do that all the time in China. We make blanket statements about how things are, what the people do, what is going to happen, even when we know that the opposite is just as true and valid.

Thus, as I was contemplating the Tao of Perspective, another Chinese friend came up to me and, shaking his head said:

“This whole Diaoyu thing is ridiculous. It’s just stupid as hell. But there is one saving grace …”

“We rule Weibo. If any of these fenqing (young nationalists) got onto Weibo and tried to start some trouble, he’d get laughed at by everyone. People on Weibo aren’t that easily fooled.”

“So we need to get everyone onto Weibo, huh?” I said.

“Yeah, or get everyone on Weibo into office.”

And just like that, I felt hope resurgent. The feeling of hope also made me more open to talking with people on the street instead of peering at them, wondering if they were going to point at me and scream for my head. Men gathered around me on the subway as a group of young high school girls practiced their English on the way to Chunxi Road. We smiled and cracked jokes. One of the girls said,

“You are lucky you are not Japanese.”

The whole car erupted in laughter and her cheeks went bright red.

“Of course not.” Men shook their heads and echoed her sentiments. “Of course not” “Even if you were Japanese …”

I know that Japanese in other cities have been attacked and emblems of Japan have been destroyed and burned, but on the Metro Line 1 in Chengdu, between Tongzilin and Tianfu, I wager Japanese are safe enough. Later, as I was leaving the station, I fell in with a  group of cops who were teasing one of their older members, just before they closed the station down.

“You old revolutionary, you should be out on the streets with them!”

They all laughed and kept teasing the older cop.

“So you gonna get out there an march,” I asked him.

“You must be joking,” he scoffed. “March around in this weather? Forget about it. Meaningless.”

I wandered around Tianfu Square looking for the protests, but all I saw were small groups of Chinese, looking around just like me, wondering when the show would start. During the marches, people would stop filming the protestors and turn the camera on me. Flash me the peace sign. Smile as we passed each other because we were all here “for the show”. It truly felt like a pop concert then, toward the end of the day, as I walked with the crowds past a line of dripping wet cops and said,

“Sucks for you guys.”

The cop snorted and grinned. And we all laughed and walked home.

Are you at the protests? have you seen anything similar before anywhere else? Join our Forum Thread on the topic here.