The China Blues are nothing new to me. I’ve had them time and again and I’ve been there as other friends of mine went through the process as well. I was mildly surprised when the other day when a China veteran who had never expressed anything but satisfaction with his life here came down with a case of the blues.

“Man, I don’t know how much longer I can take it here,” he said. “Ignorance is so prevalent”.

Of course I’d heard complaints like this before and I have for sure said things like this countless times during my eleven years in China. Westerners have problems understanding why Chinese people do the things they do. Just look at any expat forum, blog or collection of posts and roughly half of the content will be “absurd China stories” demonstrating how ridiculous life can be here.

Whether it’s environmental conditions or the state of civic affairs, these sentiments come and go.

But when another veteran, also one of those guys who wasn’t very vocal with criticisms of China, said almost the same thing to me, I started to look for patterns. Is it the weather? Is it just one of those Exodus years? I remember in 2008 when a large chunk of China vets returned home for good. I thought I was one of them too, but here I am. Back.

Makes sense right? Especially when things like this pop up:

“Many foreigners are poor devils, they failed in their home countries, Chinese government gives foreigners a high status, after all many Chinese people blindly worship foreign goods and ideas, moreover some ignorant women like foreigners, it doesn’t matter, China welcomes poor foreigners, nowadays people don’t comprehend the national humiliations of the 1930s and 1940s when Japanese invaded us, people open up to the outside, China is no longer feudal, we awake to the truth, regard foreigners as seeing Gods, you go abroad and will soon see that foreigners are crooked, racial discrimination.”

This is the “winning answer” to the question: Why do foreigners come to China? So we’re failures that run here to be treated like demi-gods.

Let me tell all of you fenqing (angry youth) something that you might not know: 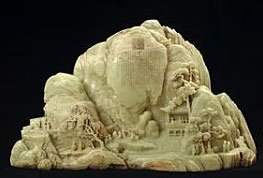 I came to China because I was deeply moved by a large jade carving I saw in the Minneapolis Institute of Arts (pictured at right). The jade was carved into a mountain on one side with people sitting and drinking tea, playing chess and relaxing underneath the bamboo. On the other side was a famous poem called the Prelude to the Orchid Pavilion (Click here for a description of that hunk of jade and a transcription of the poem).

This piece of art spoke to me and I did whatever I could to get over to China.

At the time (1999), getting a job at a university teaching English was pretty much the only option for a young graduate. So when I landed a job at Southwest Agricultural University in Beibei, a speck on Chongqing’s rump, I was pretty excited.

No one was more shocked than I to see what the real China was like. No one was more surprised then me to have Chinese girls climb into my bedroom window and fawn over me as I walked through the university campus. I had no clue that’s how things worked here. I didn’t come here for the women; I came for the beauty of a culture that had long since been stomped into dust and only after years of searching did I realize that the jade piece that touched me back in 1998 was a relic of something dead and gone.

Sure, there are still remnants of that special sauce that China used to have. But those guys are struggling in the New China. They’re destitute, unwanted, ridiculed and ostracized by a society that has been futilely struggling to recapture its soul. As we’ve seen recently, many of the best of them are gone without a trace.

And so we get the China blues.

We get the blues because everything my generation ran away from in America exists here tenfold. Venality. Ignorance. Cruelty.

So the question you Baidu backslappers should be asking yourselves is not why we come here, but why we stay at all.

Missionaries of a Nameless Sect

Why did I stay here?

That is a very difficult question to ask. Part of it can be answered by this quote here:

“Those who deal with China should realize that today it is a frontier country, looking into the future while remaining rooted in the past. In any frontier society, nothing is certain and everything is possible.”

China for all of it’s failings is exciting. The absurdity is part of the draw. Drunk Irishmen can become popular leaders of men out here. Wack rappers aren’t as wack. Bands that sound like something out of 1991 can be rockstars. First year graduates can be given projects they would never dream of seeing in the West, because of the very failings that give us the blues.

Another, less easily quantified part of it are the friends and family we gain along the way. Remember when Westerners were the only ones in Lijiang and Dali smoking bud and listening to reggae? Remember when not a single Chinese person in the country knew what an MC, DJ or a B-Boy was? Remember when 3D animation popped up here for the first time? Remember when you couldn’t buy a Mac here?

Every single Chinese friend of mine that listened to Marvin Gaye for the first time, passed me a spliff nonchalantly, threw up a great tag on a notepad or produced a beautiful design or essay is a new member of my scattered, yearning sect. The sect of youth culture struggling to pull free from the fetters of snide, arrogant, fearful elders and create a better world. That is why we are here. We are not here to follow in anyone’s footsteps. We are not here to meekly inherit a goddamn thing.

We are here to take what is and make what will be.

That dream is never more palpable then when you see it bloom in a Chinese person’s eyes because the system here is infinitely more deadly and stifling than anything we in the West (our generation ie post-70’s) have ever experienced. If you break out of the Matrix here, then you have broken out for good.

So chew on this:

I came here because I was inspired and I stayed because inspiration is my business.

And business is steady.

Have you been affected by the China blues while spending an extended period of time in China? If so, what has helped you work your way through it?

59 thoughts on “Enduring the China Blues”