With the Chinese contemporary music scene getting more and more acknowledged and praised at festivals and musical events around the world, Chengdu appears as the source of many young talented bands and musicians. The French Embassy wishes to emphasize this reality by holding a unique and cross-cultural musical event in Chengdu this year: La Fête de la Musique. 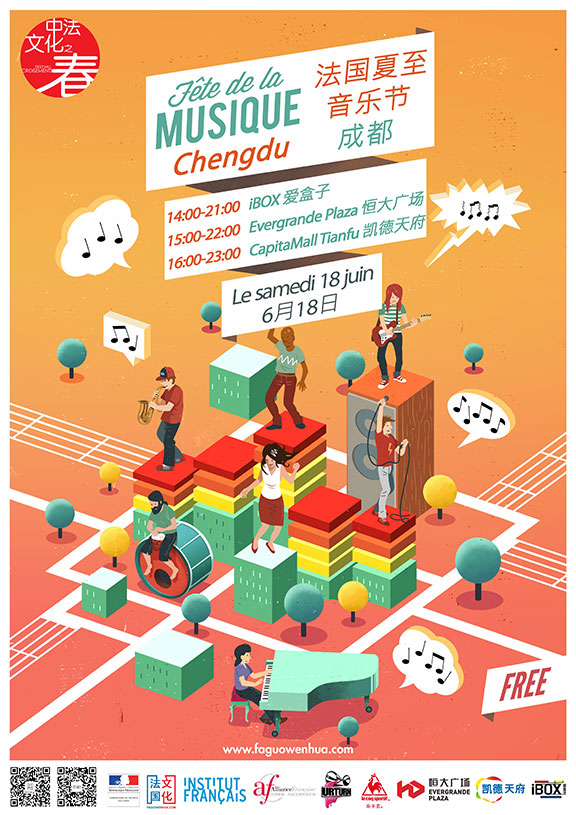 Chengdu Living: How did you begin working with the French Consulate on this project?

On a rainy evening in early spring 2015, we were going out with a couple of our French friends in Chengdu. After some beers we started talking about our great experiences of the FDLM (Fête de la Musique) in cities like Paris or Berlin and how great it would be to have this event also in Chengdu, a city famous for its relaxed and open-minded atmosphere and people. A perfect place to enjoy an open air festival like this.

That’s where the idea of helping to bring the Fête to Chengdu was born. After a few weeks of preparing proposals, designs and concepts we approached the French Consulate and introduced our idea, back then nothing more than an unrealistic summary of big dreams. However, we hit the right spot; there was a need and the right person in charge at the French Consulate who was trying to improve their current efforts for the FDLM. Because they were missing one important thing to bring the event closer to the people: the link to locals. That’s how we got in.

Authorized by the French Consulate Chengdu, UrTurn is the official organizer of the FDLM in Chengdu. This combination proves to be a powerful union as now with our connections and experience in Chengdu and the backup of a government institution; it is possible to lift up the Fête from a simple 1-band concert to a big whole-day open air, free of charge music festival inside the city of Chengdu. An event with a real impact for the people of Chengdu.

Aside from bands, what should people expect at the event? Are there any other features or attractions which are notable?

A whole day of music!

The Fête de la Musique is a global event dedicated to musical practice and live music in general, open to all kinds of audiences, free of charge. It federates various kinds of participants: educational structures, cultural centers, diplomatic networks, city councils, local authorities, ministries for culture, associations, artists, music professionals, music schools and so on. With this joint event we desire to foster the visibility of the current artistic realities of Chengdu and to enhance cultural exchanges. Therefore it tries to act as a kind of hub and showcase of Chengdu’s current music scene and its development. 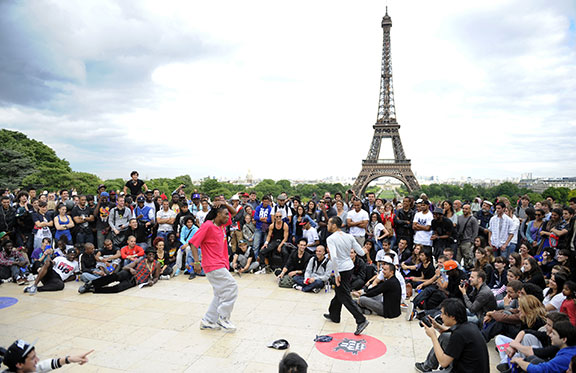 Aside from French and local bands, as well as local musicians, people can enjoy a number of unique performances on the Fete de la Musique, such as dance performances, a shadow graphic play, DJ plus live artist shows and much more.

Are you familiar with the musicians performing? Which are your favorites? Can you describe the significance of these artists and their performance in Chengdu?

Although we initially didn’t know most bands and artists, we have grown familiar with all of them during the application and registration process. Day to day the music of all artists is running in our office and we can already  sing along. Certainly, it is great to have the 3 French bands, all representing very different styles of music, play at the Fete de la Musique Chengdu and enhance musical exchange with local musicians. And we are very proud to present some of Chengdu’s famous local bands, like Yuweiwen – they are a band with the longest band history in Chengdu and have a large loyal fan base – or Wednesday’s Trip with their unique electronic music style which already gained them China-wide acknowledgement and awards. However, we were surprised at how many highly talented student bands and independent musicians signed up, such as Spark Plug (???), The Bravo (??????), Cai Qingnian (???), PeterZ and Sissy Yang (???), just to mention some of them. That is exactly what Fete de la Musique is all about: providing everybody with the chance to perform in front of an audience and showing their talent. Because Chengdu can do! (local government slogan).

How has Fete de La Musique grown over the years in Chengdu? Can you compare the event in previous years to 2016?

The Fete de la Musique entered China in 2008 in Wuhan and since has spread to many other cities (Beijing, Shanghai, Ningbo, Shengyang,…) and has grown in significance. Although, Fete de la Musique has been celebrated in Chengdu before (in 2014+2015), this year’s festival is Chengdu’s first official Fete de la Musique. The scale of this year’s event clearly exceeds the previous years with having 3 main outdoor stages and several independent side venues, 3 famous French bands, more than 30 local artists and many more great performances. Also nationwide Chengdu’s Fête’s scale is ranking number two, right after Shanghai.

Chengdu’s offer of cultural events and music festivals is growing, however, most festivals are commercial and held in remote places further outside the city (where the noise won’t disturb any neighbours and real estate projects want to promote their space for cheap rents and good support). It is indeed rare to find a music event with free admission in the city, for many obvious reasons, money and noise just being the two biggest problems. So, unless having big sponsors and strong government-backed organizations behind the project, it is difficult to organize a festival like Fete de la Musique. Surprisingly another big obstacle was to convince the main stage partners to also host local Chinese bands and feature them in the overall festival program. Luckily with Evergrande Plaza, CapitaMall Tianfu and iBOX we found three partners who support the exchange between local and foreign musicians. Special thanks to them at this point!

The French Consulate and their cultural representations the Institut Francais and Faguo Wenhua as well as the global French school Alliance Francaise have a strong focus on promoting cultural exchange between France and China. Every year they organize a series of cultural events called Festival Croisements (??????), including music concerts, dance, cinema, photo and art exhibitions, and more, enhancing to build a cultural bridge. Fête de la Musique is one part of Festival Croisements and is therefore strongly supported by these partners. In addition, Le Coq Sportif is a loyal sponsor and partner of Fete de la Musique in whole China and helps to make this non-commercial event possible by giving financial support.

France’s image in China is clearly one of being Europe’s strongest country in regard of fashion, art and most important the place to experience the European dream of romance, culture and freedom. China’s rising middle-class is fascinated by France’s sights and luxury brands and more and more tourists consider France as travel destination number one. And in fact: Paris is number one city of Chinese tourist’s world-wide. French embassies and consulates all over China are promoting this image by hosting and organizing a lot of cultural events. As far as we know, a majority of Chinese people travelling to or studying in Europe, enter Europe through France and thus apply for a visa at the French embassy, which as a result leaves the French embassy and consulates with comparably more financial resources than other consulates.

Fête de la Musique (Make Music Day) is a globally practiced music festival that was started in Paris in 1982. The festival is held in over 120 countries across the world, and in 5 different cities in China. This is actually the 3rd year it’s been in Chengdu, and it’s by far the largest it’s ever been this year.

The event is being organized by the French Consulate, Institut Francais, Faguo Wenhua and Alliance Francaise in collaboration with UrTurn events. There are also various other local organizations, restaurants and bars that are helping to make something of this magnitude possible.

Essentially, it’s a festival celebrating music in many forms, with an emphasis on allowing as many people as possible perform and/or listen. This year there are over 30 performers in Chengdu alone, including three major bands from France and many local Chengdu bands.

The French bands include:

When is it and How Do I Attend?

The festival will be held on June 18th in Chengdu, from 14:30 until late at night. There will be three main stages around the city. The locations are as follows: (will add addresses and map)

Oh and it’s also completely free. Since all the stages are outdoor ones, it’s totally acceptable to bring food or any beverages you might fancy.