In Australia we rarely fix anything  anymore – the need to fix things disappeared when we got rich – but in China nearly everything can be fixed. In fact everything in China seems to be in a constant state of repair.

China’s “developing nation” economy encourages repairs. First, wages are low enough that the consumer is generally willing to pay someone to fix their stuff. Secondly, stuff is always falling apart, so there is demand. Thirdly, surplus labor – there are more than enough underemployed older men in China who have been fixing things their entire lives that they keep the industry alive, even as China slowly moves out of the developing phase.

We have an Apple store in Chengdu, the largest stand-alone building in the world, and a host of other signs that Chengdu’s economy is exploding, yet every day men in rickety bikes ply the streets calling out to repair TV sets, dishwashers, shoes, and even kitchen cleavers.

The Drawbacks of Cheap Help

I was reminded of China’s fix-it nature when the door to my second bathroom could not be opened. It broke, and no amount of rattling or wriggling or shoving would budge it. So this morning I reported the problem and the office in our community sends a maintenance man, who announces that the door cannot be opened.

‘Well … can you call a locksmith for me?’

He calls a locksmith and twenty minutes later there is a man, Mr Xu, at my bathroom door rattling and shoving and wriggling – much like I did, and the maintenance man after me.

He gets to shoving and wriggling and rattling in earnest. I wonder if this is standard locksmith procedure. ‘Can you take the lock off?’ I ask. Apparently not. He is telling me that the latch is broken. ‘Yes, I know’.

‘I have to push the door open’.

Before I can say anything more he has put his shoulder to the door and pushed, and it opens to the sound of splintering wood. The latch breaks and crashes to the floor. It is not splintering wood after all – it is the latch that lies on the floor.

‘I know the landlord’, he says. ‘I did the electrical work recently’. My brain re-wires my understanding of the world I live in as I absorb this new information.

I was away when the electrical work was done. Previously I had spent 120 RMB trying to get some power points to work in the kitchen. The job took a long time and some things still did not work. Then, while I was away, suddenly nothing worked at all, so my wife had the power fixed (I thought by an electrician).

That re-wiring took four or five hours and cost the landlord 650 RMB. 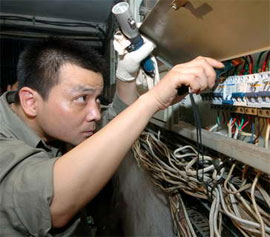 Now everything works except the microwave. But the new work is in conduits (mostly hanging at a weird angle) and the switches are dislodged from the wall. Mr Xu enthusiastically points to one of the power points sagging off the wall – ‘I did this’ he says. ‘That was me!’ He is proud of his work.

‘You mean you do the work of an electrician and the work of a locksmith?’ ‘Yes’ he says … ‘I do both’. In Australia we would call that a handyman … except that both are licenced trades.

Mr Xu is a nice bloke. Despite all that has happened I am beginning to warm to him. He can’t give me change, or a receipt, but he shows me how to cope with the broken latch. ‘You don’t need a latch’ he advises sympathetically. At one level this is perfectly true. ‘When you are inside you can turn the lock and it keeps the door closed’. I nod and smile.

I give Mr. Xu 100 RMB and he says he will bring back my change. I believe him. I have not yet experienced dishonesty in China so I expect him to return with the money. But I still take insurance.

‘I may need more work done … can you give me your phone number?’ ‘Sure’ he says. ‘And what is your full name?’ I ask. ‘Can you write that down too?’ He is back in ten minutes with my 50 RMB change.

I have had work done on the hot water system by a qualified plumber. He came in, examined the problem, quoted 80 rmb, and expertly replaced the pipes. It looks like new. He was gone 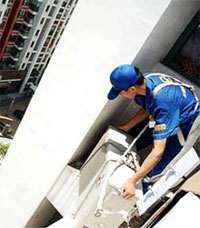 in twenty minutes, cleaned up and all. He even gave me a receipt.

I have also, a few years ago in another city, had a similar problem handled by a handyman. He came in, examined the problem, and set about repairing a broken part that in Australia would have been thrown away without a moment’s thought. He took several hours to solve the problem, building a new part, but in the end it was also like new. And he didn’t want payment because he is a friend of a friend. (We got around that by giving his baby daughter a present.)

How do you tell the difference between Mister Fixit and the Professional? Both are prone to repeatedly mutter ‘nothing to be done’. Both are likely to get the job done, eventually. Perhaps the professional has more finesse. The price is similar – unless the Mister Fixit is your father-in-law, or the friend of a friend.

What’s the final word on the Mister Fixit industry? First, it provides jobs for those who may not otherwise make a living. Secondly, it is good for the environment. Less stuff is thrown away and, even if it is, someone gets it out of the rubbish and re-uses it. Thirdly, it presents healthy competition for the ‘professionals’ – never a bad thing.

But I can see the Mr. Fixits of China slowly disappearing as quality rises, driving prices up as well. It’s only natural that a developed economy will transform amateur handymen into professionals who work according to clear guidelines. Middle class Chinese will demand better quality products, which in turn require clear return and repair policies, which in turn create a professional class of repairmen.

But the verdict is far from out. China tends to maintain traditions and trades in the face of headlong modernization and it wouldn’t surprise me at all if cobblers and locksmiths of the old stripe are still breaking down doors and fixing soles many years into the future.

26 thoughts on “Fix Everything in China”