a mainland Chinese gem especially for the people interested in the changes that capitalism brought to the Chinese country side and are being implemented by not too well informed leaders. a subtle movie full of hidden jokes and probably hard to understand for people NOT living in china. there is only one foreign actor in the film (Udo Kier playing an American). him being a foreigner is only important for several village leaders pushing forth their own agenda. not an unfamiliar feeling among long stayers here in Chengdu. enjoy this light (but a tiny long), at times absurd political satire set in a beautiful environment and some great cinematography 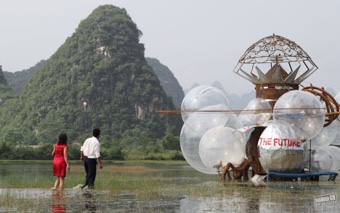