Note: This post is the third in a series chronicling the adventures of an American having a child in China. You can read the first part of the series here and the second here.

A Cesarean – or c-section – is a surgical procedure in which the obstetrician makes an incision along the abdomen and the uterus of the pregnant woman and pulls the baby out.

The c-section was traditionally used only when the life of the mother or the child (or both) was in danger during a natural birth. There are records of c-sections being performed in ancient Greece, roughly 2,500 years ago. The practice was commonly known in ancient Rome and there is evidence that c-sections were being performed all over the world by people as diverse as the ancient Persians, Ugandan shamans and Navajo midwives. The first recorded c-section in the West after which the woman survived was not until 1800.

Until modern times, a c-section cast a pall over the birthing room and sent the old women a’wailing: Death was nigh.

But now, according to the World Health Organization, c-sections are more and more common across the world. In developed nations, almost 1/3 of babies are born via c-section and the rate is as high as 80% in some parts of Italy. The WHO report specifically targets the rise in c-sections across China, where the rate has risen from less than 5% to more than 20% nationally in the last thirty years. In some parts of China, the rate is as high as 63% and rising. The WHO recommends that a nation keep its rate of c-section births below 15%, due to a variety of reasons, the major one being the health of the woman and the child. In the report, the WHO concludes that a rise in c-sections equals a corresponding rise in health care costs, which is another major reason for keeping the rate low.

Nobody really knows why more and more women across the globe are opting out of natural births, but many people have a theory. Studies have shown that there is a correlation between social status and c-section births, with more affluent women choosing to go through with the procedure than less affluent women, but there are studies that also indicate that class has nothing to do with it. Some researchers link c-sections with the daily grind, suggesting that doctors, mothers and fathers would rather get the whole thing over with quickly, so they can get back to work.

In China, women believe that doctors will suggest a c-section because it is good business for the hospitals. One doctor can handle many such procedures in one day, whereas a natural birth can take as long as 24 hours. C-sections cost more: a typical hospital will charge around 5,000 yuan for a c-section versus around 3,000 for a natural birth, so rumors abound that doctors will recommend surgery for this reason alone. 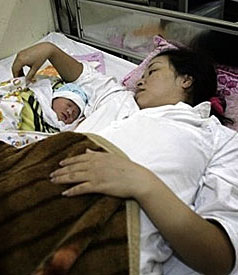 According to a survey of 46 mothers and expectant mothers on Chengdumama.cn, safety was the number one reason. Many women believe that they will run the risk of fewer complications with a standard surgical procedure than with a natural birth. However, according to the vast majority of medical opinion, a c-section is much more dangerous, with the death rate approximately 3x higher. Chinese women are aware of this, but they still believe that a c-section is safer, because a natural birth can lead to unanticipated complications that the doctor might not be able to handle. Basically, lack of faith in the hospitals and the doctors leads women in Chengdu (and perhaps other parts of China and the world) to choose the “known path” of surgery over the “unknown path” of vaginal birth.

“I paid the money for a good doctor,” said one respondent to the survey. “I believe that doctor can carry out a c-section without any problems. If I decided on a vaginal birth, I am not sure which doctor would be there and what kind of situation I would be in.”

The second reason was the “appropriate” one: the woman had physical complications that required a c-section. Reasons included a breech (when the baby is feet first), placenta previa (when the placenta is so low it covers the cervix) and other problems, such as a twisted umbilical cord.

The third most common reason had to do with the influence a natural birth has on the woman’s body itself. Woman are worried that they will have distended vaginas, sagging breasts and a life-long roll of “mama fat” — any of which might make them undesirable to their partners. In China, it is common practice during natural births to also make an incision to allow for a quicker birth. This incision often leaves an unsightly scar and is a source of fear and trepdiation for most women.

“If I am going to have a scar no matter what,” said one woman. “I would rather have it on my belly than anywhere else.”

Also, women believe that they “cannot give birth,” because Chinese women are naturally more frail and less able to cope with the trauma and pain of childbirth than Western women. Not only do the statistics reject this notion (Western women are also having more and more c-sections), but common sense tells us that Chinese women in the 1930s and 40s, could not have been much bigger than women today and in fact were probably less well-fed than your average modern Chengdunese mama. 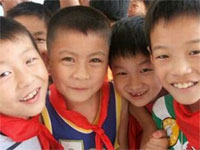 Other reasons included choosing an auspicious day for the child’s birth, the fact that c-section mamas have their own recovery room in the hospital and work. It is not uncommon for Chinese women to visit a fortune-teller and plan their birth around their prediction of what will be best for the child. In China, August 31 and the week before a holiday are big days for c-sections. Any child born after September 1 is technically one year behind in school and women fear that doctors will be unavailable during the holidays.

Organizations like the WHO and national health departments are taking notice of the climb in c-section and are trying to figure out why this is happening and how to control it. On January 20th, the Sichuan Provincial Health Department released new laws governing c-sections, as reported in the Chengdu Economic Daily. From now on, if a woman wants to have the surgery performed, she has to receive permission from not only her doctor, but also the doctor’s immediate superior:

“60% of the births in Chengdu’s hosptials are performed via c-section,” said Liang Hong, vice-president of Chengdu Maternal and Child Hospital’s Obstetrics Division. “This is not because hospitals just want to make money and are performing surgeries no matter what the condition is. Many expectant mothers are afraid of the pain, they also fear that they are unable to give birth, that c-sections are better for the child and are more convenient. Actually, hospitals have clear conditions under which they will perform a c-section that involve, for example, the baby’s size, the baby’s position, the mother’s hip size etc. Many mothers are fully capable of giving birth naturally — and doctors will advise them to give birth naturally — but they still demand a c-section. In reality, both c-sections and vaginal births carry risks, so a doctor cannot demand a patient go through one or the other.”

In Guangdong Province, c-sections are also on the rise and the government has moved to protect itself from malpractice lawsuits and the rising costs by issuing a new law stating that insurance companies are less liable (and therefore pay out less) if a woman chooses to have a c-section, even though her doctor believes she is capable of giving birth naturally.

On Xiao Bai’s last trip to the doctor, she mentioned that she was determined to give birth naturally and that, unless there are clear complications or problems, she had no intention of giving birth through c-section. The doctor took a look at her recent test results and smiled.

“Well, you are in great shape — perfect shape for a mama,” the doctor said. “We are happy to hear that you want to give birth naturally and we will do everything here to support you in that decision.”

15 thoughts on “Giving Birth in Chengdu: The Cesarean Conspiracy”