note: This post is the first of a series following an American in China’s adventures into fatherhood. Subscribe to our RSS feed or our join our Facebook Fan Page to stay informed of updates!

The process of having a child in China is different compared to the West, and although giving birth is universal and therefore involves ubiquitous truths and beliefs, there are certain things inherent to having a baby in today’s China that are unique.

The paradox that envelops the nation on all levels — the interplay between modern society and tradition — influences the intrinsic process of having a child.

Like in most places, the moment of truth happens in a bathroom, with a pink strip and beads of sweat on a forehead.

After learning that she was pregnant, Xiao Bai went to the best, or better put, most expensive hospital in Chengdu, Angel Obstetrics and Gynecology Hospital. This hospital is like no other in the area: the interior resembles a high-class hotel and upon entering, a beautiful young lady will approach and ask you how she can assist you. Xiao Bai told her and paid the 100 yuan fee for seeing a doctor. In this hospital, she was treated to a one-on-one consultancy with a doctor – a rarity for China, to say the least. This is almost unimaginable for the vast majority of Chinese who go to public hospitals, where they have to wait in long lines, push their way to the front, and are lucky if there are only three or four other patients talking with the doctor at one time.

The first question the doctor asked is familiar to every Chinese woman: Do you want to keep this baby? She replied yes.

Xiao Bai went for an ultrasound to see if the baby was in good health. A check-up at Angel is 380 yuan, compared with 30 yuan at an ordinary hospital. The check-up was to determine if the baby was positioned correctly within the womb.

“I heard a sound like a train,” said Xiao Bai. “And before I asked the doctor what is it she told me, ‘that’s the baby’s heart, pretty powerful, eh?'”

The doctor took the report and after one look exclaimed that the baby was in great health and judging by the size, must be at least 75 days old — Xiao Bai guessed that the baby was around 50 days, based on the conception date and knew that 75 was impossible. The doctor then went on to describe the Do’s and Don’ts:

The doctor wrote out a prescription for milk powder, calcium pills, and multi-vitamin supplements.

A beautiful girl accompanied her to pay for the goods — which amounted to more than 700 yuan — and with that, Xiao Bai took her bag of items and returned home. At the time she was living with a group of friends in a run-down concrete hovel next to the bus station. She slept on a small mattress on the floor and there were four cats prowling around at all times. So after spending 1000 yuan in one day at Angel Hospital, Xiao Bai realized that she would have to set her sights a little lower.

The first place she went after Angel was the Air Force hospital. In China, the military runs a variety of enterprises, many of them are open to the public. Most Chinese believe that a hospital managed by and for the military will be of higher quality than one for the common people. Once again, the first question the doctor asked her was:

“Do you want to keep this baby?” Again, she responded yes.

After looking at her report from Angel, the doctor said, “Well there is nothing much to do for the next few weeks, so just go home and come back in your third month and we can go through the basic procedures.” Xiao Bai was given a list of things that would be done at that time and then she left and went home.

In an effort to learn more and find a support group for the next three months, she went online and found Chengdu Mama Online, a forum for expecting mothers in Chengdu that includes an active discussion forum and a wealth of information. Xiao Bai went to find out more about the Air Force Hospital and after a bit of research she found out that the Obstetrics and Gynecology department had been rented out to another private third party — it wasn’t even a part of the Air Force hospital.

For most pregnant women, the hospital is very important. In China, being able to trust the institution and doctors is paramount and if something does go wrong, who can you go to for help? Since the law and the government will be useless in case of malpractice, most people consider the media as their only source of aid. With a military hospital, people feel they can trust the doctors, but they can’t possibly use the media because the media would never dare to investigate the military. So when Xiao Bai heard that the Obstetrics clinic was being run by a third party, she decided to keep looking.

By then she had moved out to the countryside to live with a friend of her husband-to-be. She spent the next month listening to buzzing insects as she fell asleep and waking up to birds singing. Eventually, she moved back in with her father and began earnestly researching hospitals around town.

In Chengdu, each district has its own Obstetrics and Gynecology clinic. These clinics are small, but can handle births and basic needs for mothers and children — but the downside is that they are constantly inundated with patients. Xiao Bai’s father urged her to consider the clinic in their district, the Chenghua District Mother and Baby Clinic. The main reason for rejecting this hospital was the TV tower next door — Xiao Bai hated the tower, because of rumors that people who lived near the tower had been sick with cancer, so she refused to go to the local clinic.

Her father suggested the No. 2 Hospital. This hospital was very close to the office that Xiao Bai used to work at and she had been there many times to interview people. She remembered that when she went there previously, doctors would always stand right next to the patients and coldly and clearly communicate the details of each patients condition. This bothered her. Also, although the No. 2 hospital is comprehensive, it is exceptionally small and crowded. So she refused this one as well.

Another complication with all of the hospitals her father suggested had to do with social norms. Her father wanted her close to his home, but in the complex he lived in all of the people knew her as a small child and when she came home pregnant, they began talking and staring. A pregnant woman without her own home and without a man waling beside her invites gossip. Although her father ignored it, Xiao Bai did not want her condition to affect him. So she decided to search out a hospital as far away from her father as she could, in a place where no one knew her and could gossip about her.

She invited her friend out to help her find an apartment, but after a few days of searching they hadn’t found anything suitable — too small, too big, too dirty, too expensive. So things looked bad until a friend turned to her and said,” I have two apartments nearby, you can rent one of them if you want. Pay whatever you can.” 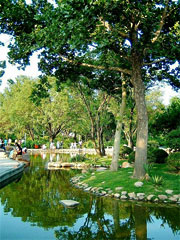 Xiao Bai took a look at the place it was perfect: big, relatively modern, right next to People’s Park and, most important of all, it was less then two minutes walk to a venerable, old hospital called Baojiaxiang Alley Baby Hospital by locals and the People’s No. 9 Hospital by the government. Xiao Bai herself was born in No. 9 Hospital 22 years ago. She figured, “Something like this must be fate and the doctors at No. 9 must know what they are doing, they did the same thing for my mother.”

Below is a small comparison of prices for a visit to the doctor in some of of Chengdu’s hospitals:

Angel: 100 yuan (50 yuan if you reserve online) — this is a one-time fee. After this initial visit, patients are given a card on which all subsequent visits are recorded and you are charged accordingly. No wait, one-on-one service, clean, comfortable — a lot like a Western clinic.

West China Second University Hospital, (Huaxi Hospital, the largest and most well-known in Chengdu) 30 yuan expert /10 yuan standard doctor — this is a fee you have to pay each time you visit. In order to be seen by a doctor, you have to show up early in the morning on, say, Monday and you might get an appointment for the next day or the day after. This is by far one the most crowded hospital in the city. There is a Gold Badge service that some people use, which is 80 yuan per visit, but you are able to see a doctor in the same day and this wing of the hospital is far less crowded. Most Chinese are not willing to pay this much for a visit to the doctor. There is a brisk business in appointment slips; locals line up and wait at around 4am and then sell an 30 yuan appointment on that day for 100 yuan. It is also possible to make an appointment through your cell phone by dialing 12580 (only available through China Mobile’s Gotone service) — you are charged minutes from your phone for each call as well as the price of the appointment, but you don’t have to stand in line. I have seen foreigners and Chinese, using this service, walk in and see a doctor right away.

No. 9 Hospital: 11 yuan standard / 15 yuan expert doctor — this is a fee you have to pay each time you visit the doctor. People do show up early in the morning to get an appointment, but in our experience it has always been possible to show up at 2:30pm and see a doctor within 30 minutes.

Stay tuned for the next post about having a child in China, in the meantime leave your comments below!

27 thoughts on “Giving Birth in Chengdu”