The walls of their recording booth are lined with pads, and the floor has carpeting. There’s an expensive mic, a mic screen, a comfy chair, a bright adjustable lamp, and a music stand for voice actors to read scripts. With only one small tinted window and the room lights out, the lamp’s illumination draws your focus directly onto the page.

Of the eight full-time Chinese staff members, Pablo does the deep-voiced male roles, Emily the warm friendly females, Coral reads the cute, bubbly girls, while the boss, Shelly, does the motherly narrator voice. For foreign-language recordings, they have a big phone book of foreigners’ numbers. They have actors for Korean, Russian and even native Australian accents. Over the past six months, when they need an American voice, they’ve been calling me. 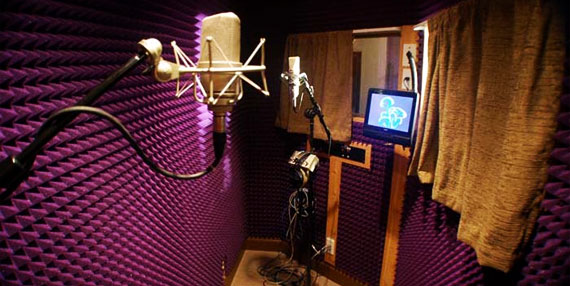 In the beginning, there didn’t seem to be much wrong with the scripts I received. I did notice problems common to Chinese-English translations regarding grammar and syntax, but I was so preoccupied with my own performance as a voice actor at the time that I didn’t question them. Once I’d worked out most of my own subtleties (a process which I’ll summarize below) I had the time and freedom to appreciate the silliness in the scripts given to me. As you no doubt imagine, some of them are completely silly.

If you haven’t heard them barked over the radio in a taxi or on late-night television, the format of Chinese advertising recordings goes like this: Company name (followed by “Co. Ltd.”), a short slogan (“we bring you lasting heart-felt!”), a mysterious sounding introduction related to their history or nature, a vague description of the company’s service and location, why the company is famous, several of their technical product lines (“spiral cuff rotators, diagonal bolting lathe, PX3, T07, injection stapler”), certification in ISO:9001 environmental standard and other management standards, principles the company adheres to (“We always adhere to the ‘quality utmost, integrity superior’ principle”), a poem further hyping up the company, company name again, and another catchy slogan.

Very early on I learned, despite glaring mistakes, to never fix any problems in the script.

At Bokai, our client is usually another advertising company that received the script from another advertising company or media department. The source of our scripts is unknown, as often is the destination of our recordings.  Many of these clients don’t have the English skills to discern what’s a misspoken word and what’s a correction, so even if we explain to the client that we made some corrections, they know that their client might not believe it, so they tell us to stick to the script. Ultimate responsibility for corrections lies further down the client-line.

So I do what I’m paid to do: read poor translations.

There would be fewer errors if translating from English to Chinese since that’s much easier. Most English words have a direct Chinese equivalent. After all, Chinese scholars, merchants, and others have been adapting English for Chinese readers for centuries. And each English word or phrase shrinks down nicely on the page when translated into Chinese, as opposed to the cumbersome paragraphs of English translated from a neat arrangement of characters.

Watch how much space this 10-character Chinese noun-phrase takes up on a page:

An experienced translator knows to shed off a lot in a final English translation from Chinese. When I was translating and editing for That’s Yangzhou magazine, my Chinese coworkers took no issue with me condensing and deleting words. But when our Party Secretary came in, I had to take orders from someone who couldn’t read English. “I’m counting eight characters in the first Chinese sentence,” he’d muse, “but you wrote only four English words. Hmmmm.”

When he was in the room, I had to create lengthy and unreadable texts, and let the layout designers take the blame for cutting half of it out just to fit it on the page. With that job in the past, I’m much happier working on fun ways to read this comedy.

My first voice acting job with Bokai was to play 11 different cartoon-male roles for an educational video game that teaches English. I found right away that the shape of my mouth (namely smiling and not-smiling) created the illusion of different characters. From summer through winter, I slowly learned to oscillate high and low-pitched voices that were much more stimulating to the ear; exhaling while speaking, to the point of almost loud-whispering; bringing down my speed while still maintaining phrase fluency; speaking from the diaphragm to minimize any nasal quality, while weaving my voice around a mid-level pitch.

When I make a mistake, I clap once, which makes an obvious blip on Pablo’s editing software, and I re-read from the last place I paused. I step out of the booth and Pablo has it edited and ready for effects in minutes.

Without further ado, check out some audio files below to hear the actual recordings.

Here’s a sample of an advertisement I recorded for Bokai Media Studios in Chengdu. This is the uncut version that includes my gasps for breath between huge strings of awkwardly arranged words:

And I’ll offer one more recording, this one inspired by the villain in the horror movie series SAW. While I was in the studio, they showed me a clip from the movie and had me imitate his menacing voice:

Let us know what you think by leaving a comment!