Note: This post is the second in a series titled Chengdu Stories wherein we interview local characters who contribute to local culture in the city. If you  haven’t already, check out the first post in this series with Chengdu graffiti artist Gas.

Over the last few years I’ve been noticing that I have more and more friends who are picking up martial arts like Muay Thai and Brazilian Jiu Jitsu. And in case you don’t have friends who’ve caught the MMA (mixed martial arts) bug, the sport has blown to mainstream proportions over the last three years. In developed Western countries, at least.

So you can imagine my surprise when I see, outside of Cafe Paname, an advertisement for Brazilian Jiu-Jitsu lessons (hereafter referred to as BJJ, *snicker*). Upon seeing the advertisement I immediately had questions in my head about who would come to Chengdu to practice BJJ and what the local conditions were like. After all, jiu-jitsu, distinguished by its grappling and 1-to-1 on-the-ground wrestling moves, is a far cry from kung fu. 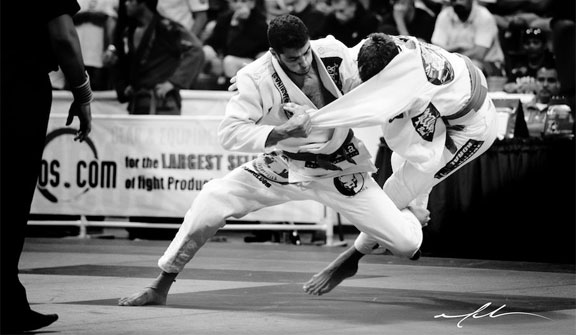 Without hesitation, I made a call to Jamie, the friendly Englishman listed on the ad, and scheduled an appointment for a lesson. I visited the centrally-located gym that hosts Jamie’s BJJ sessions (adorned in ancient-looking Kenpo armor, very cool) and came back with answers. And a few bruises on my neck from trying to bear the tear-inducing pain of chokeholds as long as I could manage.

Jamie: My name is Jamie Fraser and I come from Devon, which is in the South West of the UK. I train in Brazilian Jiu-Jitsu.

Chengdu Living: How would you describe BJJ to those unfamiliar with it?

Jamie: Brazilian Jiu Jitsu is a martial art which emphasises ground fighting, and the practical application of leverage and technique to overcome a strength disadvantage. Full contact sparring is essential component of BJJ as the attitude of the Jiu Jitsu practitioners is that the validity of techniques can only be demonstrated through the use of the technique against a fully resisting opponent.

There are no punches, kicks, or strikes, things that people typically associate with martial arts.

One of the most apt comparisons I have heard for BJJ is that it is a game of chess (except with choking!), where the combatants start with a full array of options, and each player makes their moves. The aim of the game is to cut down all your opponents options until he is left with only one option left – to submit, otherwise known as to ‘tap out’, or otherwise face the risk of unconsciousness or injury. BJJ has a position before submission attitude, where a safe position (and hence, control) should first be obtained before any submissions are attempted. There is a positional hierarchy, and it is this battle for dominant position which characterises Jiu Jitsu.

Chengdu Living: Who do you think BJJ is for?

Jamie: Jiu Jitsu is suitable for almost anyone, because In Jiu Jitsu the aim is to create your own style of Jiu Jitsu, moulding the techniques to fit your body type and physical attributes.

“Jiu-Jitsu is to protect the individual, the older man, the weak, the child, the lady and the young woman from being dominated and hurt by some bum because they don’t have the physical attributes to defend themselves. Like I never had. “

For children and teenagers, Jiu Jitsu teaches character and confidence, the type of confidence that comes with the knowledge that they can trust their Jiu Jitsu. It will teach them that even when they are in a difficult situation, and under a great deal of pressure, they can still handle the situation and not quit. It is suitable for women, because in a self-defence situation, a woman with a decent guard she would stand a greater chance of being able to defend herself. So If I ever have a daughter I will teach her Jiu Jitsu. If I ever have a son I will do the same.

However with the popularity of MMA, it tends to attract males, and they tend to be athletic. But I do not mind who comes, Jiu Jitsu is for everyone who wants it.

Chengdu Living: When did you get interested in jiu jitsu and what interested you most about it?

Jamie: I like the fact that it is so technical; millimeters, and the distribution of weight can literally make all the difference between a technique working or not against a skilled opponent. I like the fact that you don’t get punched in the head so there is no cumulative brain trauma. I like the fact that Jiu-Jitsu is more a matter of whose mind works faster, than whose body works faster. I like the fact that it is effective. It is really great feeling when you are against someone who is bigger than you, stronger than you, and who is using 100% of their power, and, through the use of techniques taught in Jiu-Jitsu, leave them with no other option but to submit or face being choked out. And then you release the hold, joke around a bit with your partner, and do it again 5 minutes later. A Jiu-Jitsu club is like a sports team, everyone supports everyone else.

Chengdu Living: When did you first get involved in martial arts in Chengdu, and what role have you played so far?

Jamie: I knew that I couldn’t live in a place where I couldn’t train, so when I came to Chengdu I looked for a BJJ club. I found one, but the teacher was of an extremely low level (he had around 2 months training and it showed) yet he wore a black belt when he taught. I wanted to train the way I had trained back in the UK, and it wouldn’t be appropriate to correct his techniques in front of his students as this would lose him face, so I asked him to let me use the room and teach once a week, he didn’t agree. So anyway I left, I phoned around and found this gym advertised in a local magazine, V (the gym owner’s name) was kind enough to let me use the gym, so I started my own club. V has many other martial arts (such as Aikido, Kendo etc) at his gym so if you are interested in other martial arts you can give him a call: 13018236007.

Chengdu Living: Compared to your home country, how would you describe the Chengdu local scene for martial arts? What are the advantages and downsides of practicing in Chengdu?

Jamie: The Chengdu martial arts scene is has an abundance of Tai Kwon Do, and other traditional martial arts, some Judo, but not much Sanda and other forms of Gong Fu from what I can see, which surprised me. Ideally I would like to find a good boxing gym or wrestling gym here in Chengdu, but I haven’t found one yet. Unfortunately there are no really high level BJJ guys here, so that means I haven’t progressed as much as I would have had I moved to Beijing or Shanghai, or stayed in the UK. Also, because MMA (Mixed Martial Arts) is not well known here, the BJJ club does not get the advertising benefits that MMA brings.

Chengdu Living: Over the last few years BJJ has ascended to near-mainstream along with MMA – how has this affected the art form? Do you see this as a good or bad thing?

Jamie: MMA has always been one of the best advertisements of BJJ, indeed the family that created modern day MMA was actually the same family that created BJJ. They did this because people didn’t believe a martial art that didn’t have striking could be effective, so they created a ‘no holds barred contest’, invited masters of various styles of martial arts to join (including boxing, karate, wrestling, Ninjitsu, Sumo, etc), and entered one of the physically smaller family members. They did this to show the world that a smaller man could win an open weight free style fight using technique. That was UFC1, there are many videos of it online if people are interested. 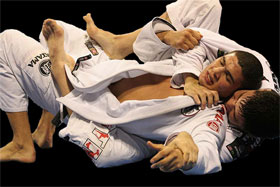 One of the good influences MMA has on BJJ is that it keeps BJJ from becoming too watered down, I believe that without MMA perhaps some of the more potentially dangerous submissions (like neck cranks, heel hooks ect) could end up being banned, which I believe would be a bad thing. As once you start to remove more and more techniques, and add more and more artificial rules then the art becomes less and less like a fight. Which is what has happened to Judo.

The inclusion of wrestling techniques into BJJ is likely to become more important in the future, however this is limited to some extend by the rules in BJJ. This blending of wrestling and Jiu Jitsu is both good and bad, good because it will bring success to those athletes who are competing in MMA, after all what is the point in ground fighting if you can’t take it to the ground. But bad because wrestling is more strength based, and Jiu Jitsu was created for the weak. The fundamentals however will never change; they are fundamentals because they work. World Championships are won using only the most basic moves that are taught in class.

Chengdu Living: Where do you see the future of BJJ and other foreign martial arts in Chengdu going? Is anything happening presently to advance the artform here?

Jamie: There is the possibility that an established chain of gyms from Beijing could open up their next gym here in Chengdu, so I am going with a friend to Beijing this coming weekend to have a look at their set up. I will also be competing in a tournament while I am there, wish me luck!

Jamie: Before the club was made up of mostly Chinese people, but now it is mostly foreign people. Realistically I expect the club to attract mainly foreigners; there are a couple of reasons for this. First of all, I cannot really explain BJJ that well in Chinese, although thankfully I have a friend who speaks perfect English and Chinese so he can help me in this regard. Secondly, in my experience, when Chinese children grow up, generally physical games and ‘rough and tumble’ is not really encouraged, instead physical education comes mainly in the form of more non-contact movements, where many people will perform the same, organized, predetermined, exercises or routines at the same time. This is not bad or good, it is just the way it is. However BJJ is not like this at all, so it may seem a little culturally foreign. Thirdly, MMA is more popular abroad than in China, and MMA is how most people find out about BJJ.

Chengdu Living: Anything else you’d like to add about BJJ in Chengdu?

Jamie: If you enjoy a physical sports come down and try Jiu Jitsu, it’s quite unique in my eyes. I’ll end the interview with one of my favourite Jiu Jitsu quotes:

“Jiu-jitsu is the gentle art. It’s the art where a small man is going to prove to you, no matter how strong you are, no matter how mad you get, that you’re going to have to accept defeat. Thats what Brazilian Jiu-jitsu is.” -Saulo Ribeiro

Thanks to Jamie for participating in the interview, teaching me the basics of Jiu-Jitsu, and creating something cool and unique for people to enjoy in Chengdu.