Note: This post is the first in a new series titled Chengdu Stories wherein we interview the people who make Chengdu what it is. Be they artists, musicians, or proprietors of local establishments we visit weekly, we’ll use this space to share the story of those who’ve left an indelible mark on Chengdu’s local culture.

When I was in high school in Washington D.C., I knew graffiti artists who would endlessly sketch their alias’ in notebooks during class, eventually graduating to spray paint and the quiet streets of the nation’s capital. I thought for sure I had left this culture behind when arriving in Chengdu but was shocked and excited to find that I was wrong. For over a year now I’ve been noticing a graffiti tag posted all around Chengdu.

It’s not the first I’ve seen a tag in the city by any means, but two qualities about it made it impossible for me to forget: its sheer abundance and its unmistakable artistry. It’s simple, ever-present, and beautiful. Just three letters: G-A-S. 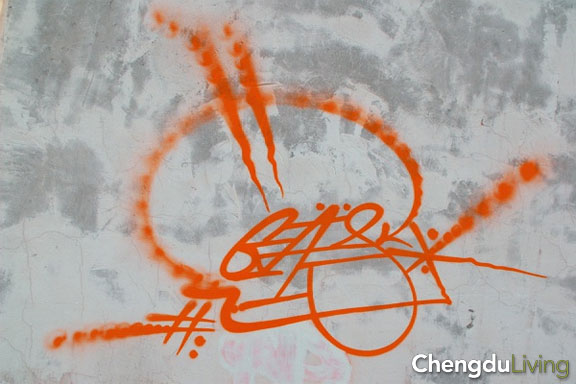 After noticing Gas and his tag literally proliferate around me and the places where I pass time in Chengdu, I pledged to make an effort to track him down. I was compelled and fascinated by what kind of figure was behind this.

With a little help from a friend (thanks Eli), I connected the dots and interviewed GAS. Following the interview you’ll find a collection of street art created by Gas in and around Chengdu.

Gas: “My name is Shui Gui (??, literally “Water Ghost”). My tag is ‘Gas.’ I am an art student from Chongzhou, a city outside of Chengdu in Sichuan.”

Chengdu Living: How long have you been an artist?

Gas: “I wouldn’t call myself an artist, just a writer (literally: ???). I have been writing since I was 15. I was always into hip hop culture – break dancing, street ball – I tried drawing and using other mediums before then, but 15 was the first time that I picked up a spray paint can and painted a wall. I remember seeing graffiti for the first time – whoa – it blew my mind.”

Chengdu Living: How old are you now?

Gas: “Twenty one. You know, I’m still new to everything. I don’t have a girlfriend; I have never been with a woman. I have never been in love. I don’t have a lot of money or a lot of experience either, I just do graffiti. I want to contribute to Chengdu’s culture. I know that graffiti in China is not at the level of graffiti in the West, so I have to turn it up and keep improving.”

Chengdu Living: How do you see the situation toward graffiti improving in Chengdu?

Gas: “We need more cooperation. Chengdu has a problem with being fragmented- we need to find a common ground. Someone told me that the era of hip hop in Chengdu is dead. I don’t believe that. It’s not reached its pinnacle yet, its time has not arrived. People say they are Chengdu kings but that’s bullshit, Chengdu does not have kings yet. King is like a military rank. You cant just say that you are a King, or say that you are All City, just because you think you’re good. You have to earn that. People don’t focus on the fundamentals enough. In Chongzhou, where I’m from, there is a street- 100 meters long, covered with graffiti on both sides. This was all done by me, legally.”

Chengdu Living: How did you get to do that?

Gas: “I spoke to the town officials beforehand. It comes down to being a good person. They know that I’m a good guy. Some people are really stingy with their art, they just want to make a little bit of money with it. But their skill level really isn’t that good yet. The way I feel is that you got to get your skills up first, then you can try to make some money off of it.”

Chengdu Living: How did you get started in graffiti?

Gas: “When I first started I thought it was really tough to use aerosol, but I was interested in it, so I kept practicing. Now I have a decent control with spray cans. I try to find flow, the rhythm. Having the right color scheme affects the way that people feel about your piece. The relationship between the colors, the relationship between the composition and the wall, the wall and the surrounding environment. It’s all connected.

If you’re just starting, I reccommend you do this. Start with A, B, C and work your way up to Z. Make them look good. Even for Chinese writers, they need to perform this well before they’re ready to move onto Chinese characters which are more visually complex. Hong kong has an influential writer named Xeme. He writes in traditional and simplified characters. He has a ton of style, check him out.

I look at a lot of graffiti online. I use online translators to understand discussions other languages.”

Chengdu Living: Are you a member of a crew?

Gas: “I’m not part of a crew. I’m completely independent. If I join a crew, they want to control me. They tell me what to write and what not to write. Like bombing – they won’t allow it. It’s not that they are afraid of bombing – they all got busted many times – they just want to take a more commercial route. I think that’s ok, as long as you are respecting the roots of the culture, but I’m trying to promote graffiti in a systematic way. My previous crews tag was OCT. Oct = our city, or CTU, the airport code for Chengdu. If you see this tag in Chengdu, it’s definitely mine. I paint a lot, and I have never been busted.

Chengdu Living: What are your goals for your graffiti?

Gas: “To give people on the street art to enjoy. Taking pictures of graffiti and putting them online is cool, but that’s not what I’m all about. I don’t write graffiti to collect the pictures, the goal for me is to put it on display in the street. Some people just paint in the small alleys. That’s fine, but not a lot of people are going to see it. Some people have a lot of excuses, I’m tired of the excuses. I’ve been hearing them for 5 years. I want to paint on big streets. I want to find big streets to put my art on, big corners, noticeable places. Take it to the streets.

I hope that Chengdu grows to embrace street art in all forms. I wish that the Chengdu subway would do what the some other cities do, and let artists paint in designated spots. Like sometimes they will put some art up to cover over the people who have written ban zheng ( ?? , an ad for false documents) – in public places. Sometimes I cover up those things when I paint.”

Really I would like to paint on trains. But I gotta be realistic. You gotta start with the tagging, and work up to the bombing. Systematically.

Chengdu Living: Who are your influences?

Chengdu Living: Where can we find you online?

Gas: “Follow me on Weibo. My username is Gas1. I have a blog also.”

Chengdu Living: Anything else?

Gas: “There is one more thing I would like to say. China is a harmonious society. I have a big brother- a brother named HuJinTao, and I will always be loyal to him. I have another big brother named WenJiaBao. I believe in their policies. Even though some people might think that they are wrong, I think in this era, they’re doing a good job. 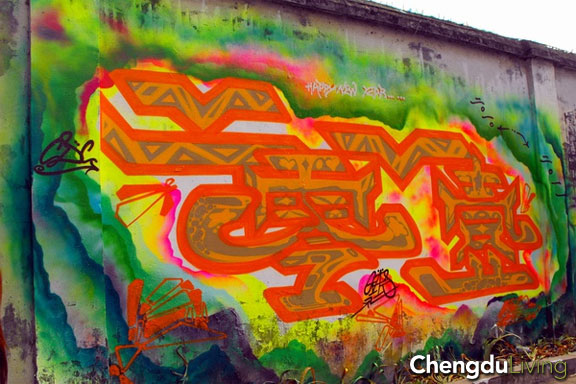 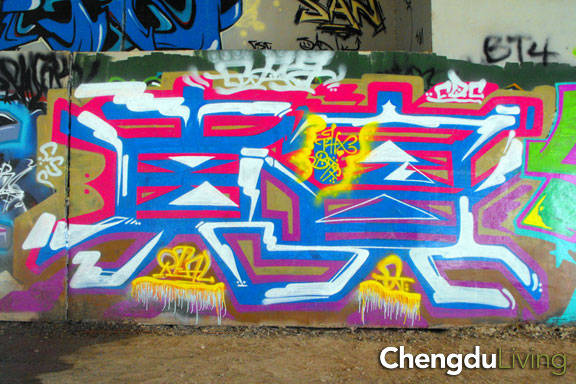 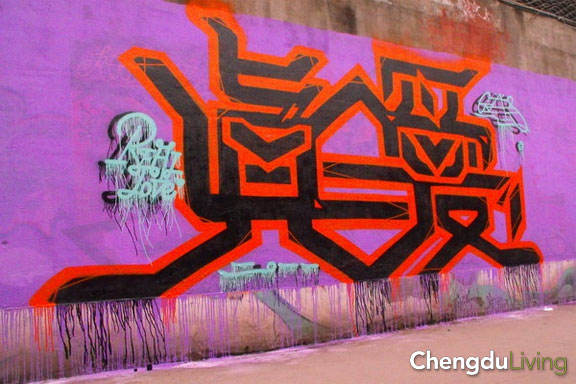 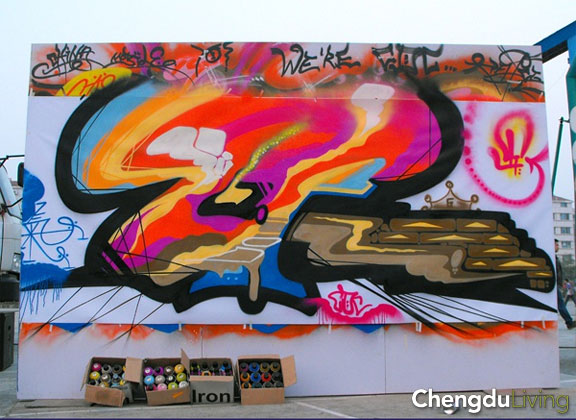 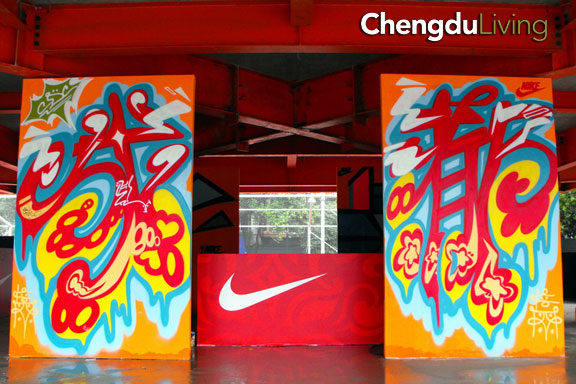 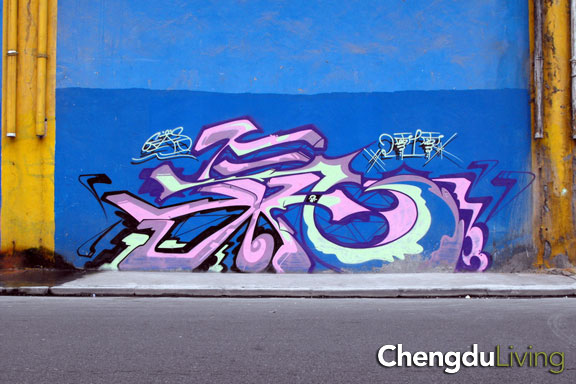 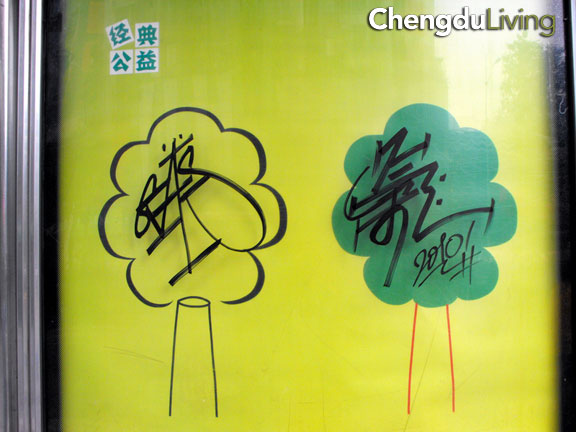 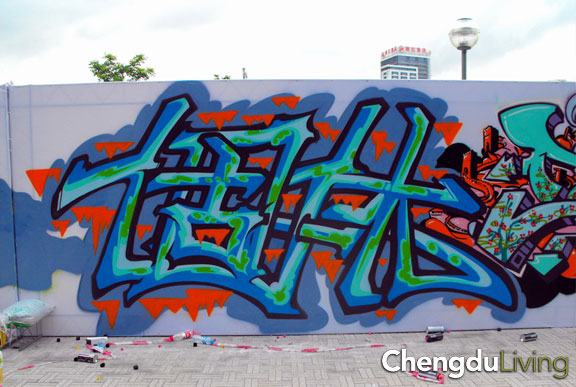 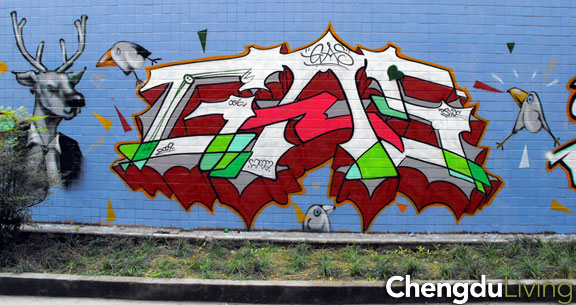 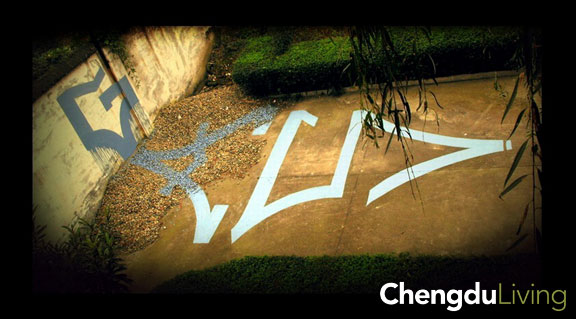 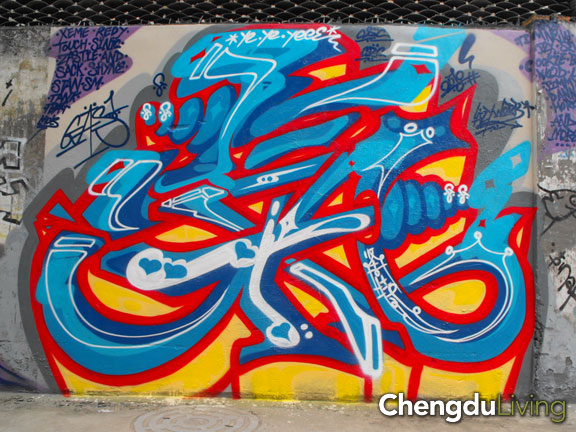 We’re looking forward to upcoming interviews with other Chengdu personalities. If you have a suggestion for someone who’d make an interesting candidate, go ahead and send us a message and let us know!

First Round of Additions

I added some more images, below. If anyone has anything else that you see and want it posted here, email me. 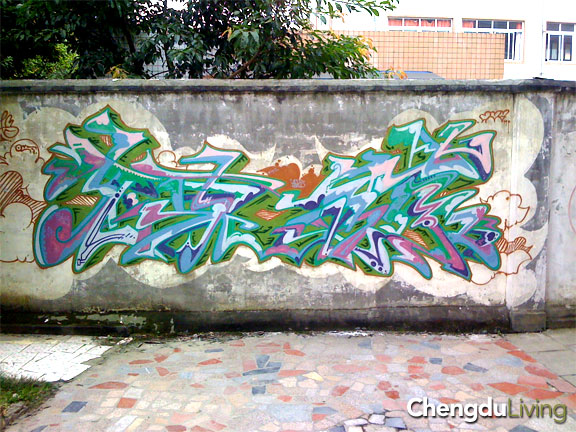 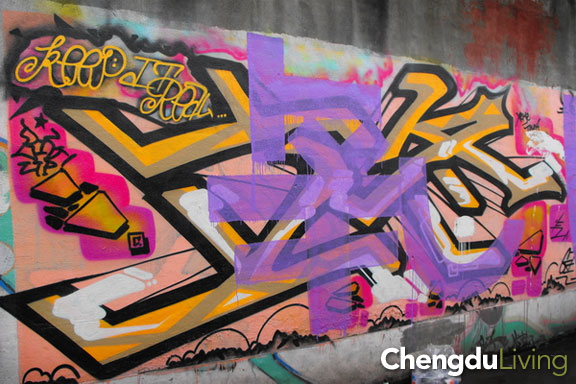 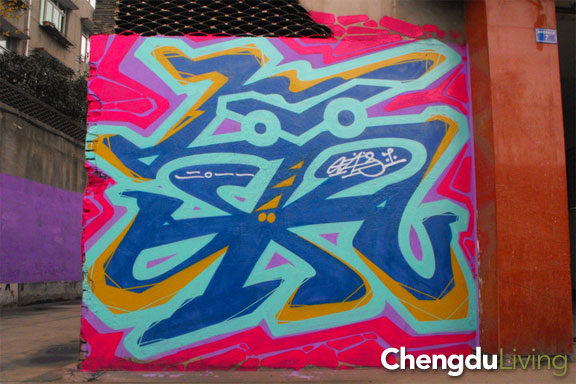 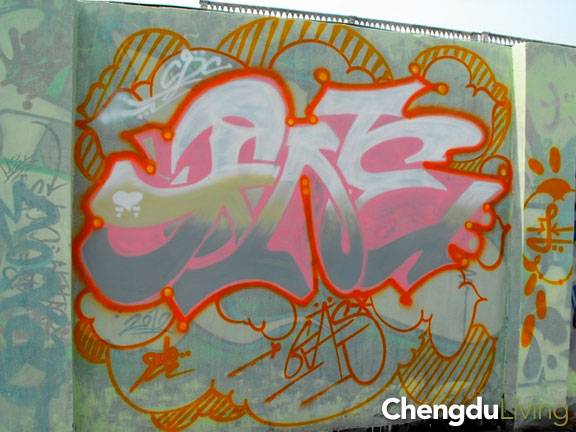 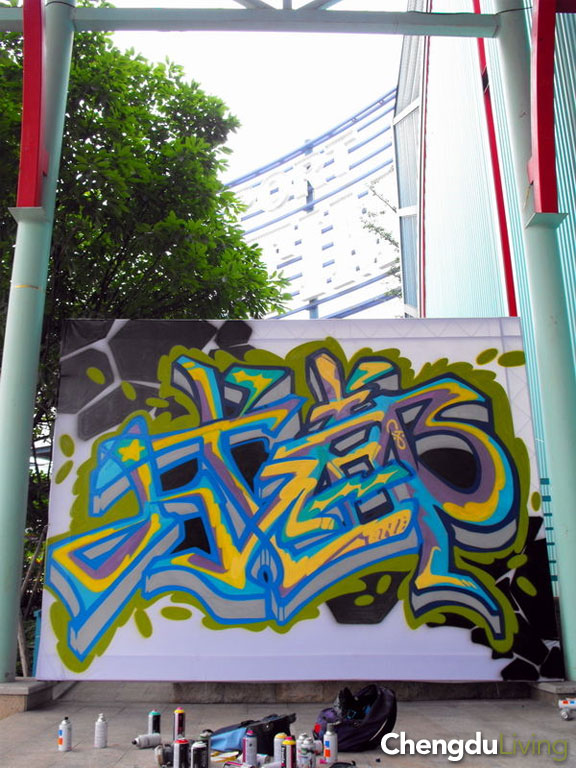 Second Round of Additions

I went to Gas’ hometown of Chongzhou a few days ago and got some photos while I was there. Lots of really nice stuff there and a nice town otherwise, worth checking out since it’s about 40 minutes from Chengdu by bus. 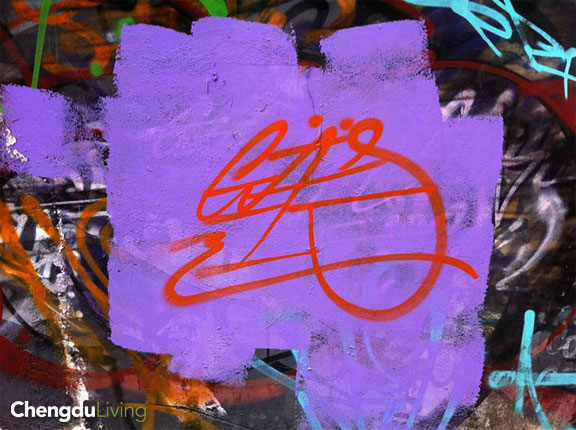 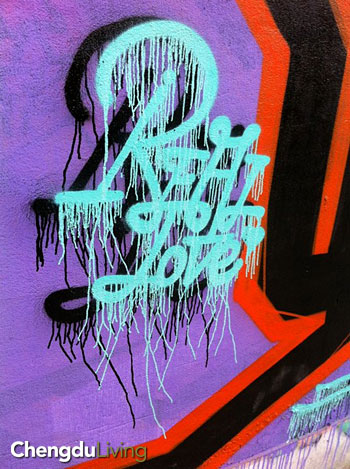 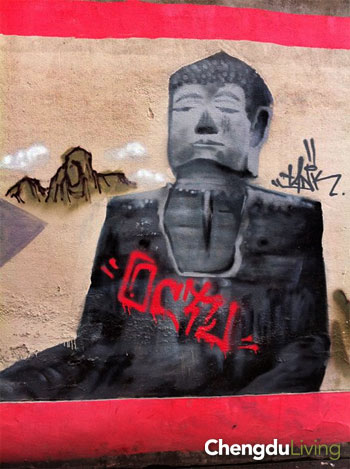