What follows is my personal account of the death of my girlfriends grandmother, lovingly referred to as Laolao. Along the way there’s grieving, vacationing, understanding and deception.

It was callus of me to say to my girlfriend “she is going to die while we are gone,” but that’s how I was feeling at that moment. Koko was just finishing two months of work in Shanghai, and we were getting ready to go to Thailand for the wedding of one of my close friends when her mother called to tell her that her maternal grandmother, her Laolao, was having health problems. The trip was scheduled for ten days, and I imagined a graph showing “number of days you wait to visit her” on the x axis, and “likelihood that you will see her alive again” on the y axis, with a downward sloping line heading towards ten.

Koko did not want hear this. We had been living in different cities for 6 months, and Koko was looking forward to our reunion, so she reassured me that her grandmother was strong. She knew very well the fragility of her grandmother’s condition, but she was already gearing up for the romance of a cross-cultural wedding in the tropics, and she was not interested in breaking down her morbid dilemma. She was probably aware of the gamble that she was running though, and maybe it was the unstable combination of giddy excitement and filial guilt that combusted into the sickness that hit her as soon as we got off the plane.

She lay in bed for days, vacillating between stoicism and self-pity, with a strange fever that returned each day, and a cough that covered the floor in soiled tissues and empty medicine packages. But the wedding was beautiful, and two days later, we flew from ChiangMai to Phuket with the newlyweds and several other friends. We sipped drinks on the beach, and on New Year’s Eve we kissed, and posed for pictures in front of a sky flooded with twinkling paper lanterns. The next morning Koko reported feeling better, but by the afternoon she was sweating with fever again, confined to the room with the ceiling fan whoofing overhead.

On our last day with the honeymooners, Koko stayed in the hotel sick, while I went to the beach with our friends. I called from the beach and she was in tears. She had spoken to her mother, and Laolao’s condition had taken a turn for the worst. It was not clear (to me) if she was dead already, or in a vegetative state, but the bottom line, I gleaned, was that she was on her deathbed, and Koko now understood she would not see Laolao again.

Why is it so important to be present for the death of a loved one? Is it to see them one more time? It’s not really about a number of times, is it? Is it for the afflicted? Of course. But there is something in it for the visitor as well. It’s not that the visitor wants to be there – there is an implicit obligation: if you love me, you will suffer with me when I depart. Right then. That very instant. Not when it’s convenient. You visit the deathbed to remind yourself that you are supposed to be unhappy. Grief demands focus. You cannot grieve on vacation.

Koko and I lay on top of our sandy sheets, and she cried enthusiastically. I wracked my brain for something helpful to say. “It’s not your fault,” I said over and over again, imitating how I imagined a psychotherapist might sound. One of the friends we were traveling with knocked on our door to ask for a bottle of whiskey in our room, and at that moment Koko sprung off the bed and vomited on the floor. The friend took the bottle and left.

The realization of Laolao’s imminent death was followed by a desperate, frustrating, and ultimately fruitless attempt to change Koko’s plane ticket back to China. There were only a few days left on our trip, and it seemed worth any price to potentially give Koko a chance to see her grandmother alive again. But it was a day after New Year’s, on a resort island, and finding a plane ticket short notice was a preposterously expensive dream. So we plowed ahead.

We took a boat to a beautiful remote tropical beach, and Koko spent the whole time in the room. Reefs went unexplored, jungle paths unhiked, water caves unkayaked. Large bats swooped between the palm trees around our bungalow at dusk. But there was no cell phone reception at the bungalow, so Koko and I walked to the beach to call her family. Grandma is still hanging on, she was told. We had walked about 30 meters back through the grassy path in silence when Koko turned to me with a quizzical look and said, ‘I think my sister was lying to me.’ And then after a brief silence, ‘I think my grandmother is already dead.’ The idea had crossed my mind and to hear her say it made me immediately certain it was true. I was strangely proud that my girlfriend had seen through the polite deceit that her family was trying to pull on her, but I played coy when she asked me what I thought. I knew it would not be comforting for me to voice strong confidence in her morbid hunch, but of course once prodded, I did, and her suspicion coalesced into grim conviction, then desperate grief.

I lay next to her in bed as she thrashed and wailed, breaking into spasms of deep coughing. Koko said she was sure Laolao would have wanted her by her bedside, because Koko was Laolao’s favorite grandchild. She lamented that I had never gone to meet Laolao, a trip that she had repeatedly pressured me to make, but I had always found reason to avoid. My reluctance to go stemmed from a fear that a full family introduction was tantamount to a tacit marriage engagement, but seeing Koko’s inconsolable disappointment, I regretted not having gone. I cried with Koko. I felt sympathetic, then numb, then sympathetic again. I stroked her hair and wondered why I didn’t feel such a close bond with my living grandmothers. My eyes strayed to a Dutch soccer game playing on the television in the background. One of the players scored an incredible goal by chip shot. Koko continued to sob.

Then Koko suddenly sat up again. “Give me the phone,” she said. “I’m going to call them back. I want to know what time Laolao died.” I protested briefly, but Koko’s mind was already made up, and moments later I was walking behind her on the path, buttoning my shirt as we headed toward the beach. The sun was setting in a very picturesque way (the photo above is the one I took) and seeing it, Koko declared matter of factly, “wow, I didn’t realize how pretty this place was.” Then she dialed her sister. I knew she was going to say that Laolao was dead, and as I listened to their conversation, Koko tearfully interrogating her sister, I drifted into a fantasy about the poetic juxtaposition between the beautiful sunset, and the bad news being delivered. Then suddenly Koko was handing the phone to me- “she wants to talk to you.” I looked at it like she was holding a snake. “Me? What? Why?” “She says Laolao is not dead.” I picked up the phone. Her sister’s voice was clear on the line “Eli, hello, it’s me. Koko is talking nonsense. She won’t believe me so I want to talk to you. Laolao is not dead. What I can tell you about her condition is that…” Then the call cut off. The phone was out of credit, and there was no way to buy another card on the beach. “What did she say?” Koko asked. “She said that Laolao is alive,” I said, puzzled. “Yeah, that’s what she told me too,” Koko said, leaning her hand on her neck.

I found out about Laolao’s death when I returned to ChiangMai four days later. Because my passport had been within six months of expiration, I hadn’t been able to get a Chinese visa and had applied for a new passport before we left ChiangMai. Getting my new passport meant changing my plane ticket and flying back to Chiangmai while Koko went back to China alone. From Phuket she flew to Kuala Luampur, then to Chengdu, and then to ZhengZhou, in Henan. At the airport her uncle met her and drove her to XinXiang, where two other relatives got in the car, saying they were going to the hospital to visit Laolao as well. Koko called her mother. She could hear the sound of funeral dirges playing in the background. “That’s the sound of a funeral ,” She said to her mother. “I’m watching tv,” her mother retorted. Riding into Laolao’s home village, the unpaved street was lined with condolence wreaths and Koko knew she was too late. She stepped from the car and dropped to her knees in the muddy snow.

When I visited Laolaos grave, it was exactly 45 days after her burial – just the amount of time that the soul of an old woman from Northern Henan’s soul stays in her body after death, I was informed. To mark the milestone, a procession of 15 of Kokos relatives and I, dressed in white, walked to the fallow field on the edge of town where Laolao was buried. I carried a coffee table atop which apples and steamed buns were placed it in tribute. A mound of red spirit money was burned. Laolao’s eldest son moved the process along curtly, ushering the men and women into separate groups and initiating a series of greetings addressed to the deceased. After each series of chants by the men, the women would kowtow, weeping loudly. This happened five or six times and then it was over. Crying as she walked away, I held my girlfriend’s hand, wondering if someone was going to come back later to retrieve the coffee table. 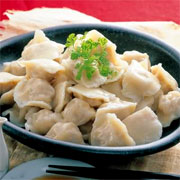 As these things often go, the irrational terror I felt about meeting my girlfriends family dissolved upon contact with the mundane reality of the encounter. We played mahjong and made dumplings. Exchanged red envelopes stuffed with money. Her father asked me about the American tax system. I drank baijiu with her grandfather. Her mother gave me a pair of long underwear, then another pair, and finally, sensing my weakening resistance, a third pair. All the time I couldn’t help wondering, when exactly had Laolao died — had I been lied to on the phone?

When my girlfriend finally told me directly that yes, her sister had lied to me, she followed with an impassioned defense of her entire family’s deception of her, so it was very hard for me to sustain any indignation. Had they not deceived her, she argued, she would have lost the shred of optimism that carried her home from Thailand. Confronted by Koko on the phone, her sister had had no choice but to double down on the lie and bring me into it.

I wanted to feel wronged, but I couldn’t help but imagine that things would only have been worse if they had told the truth. Their thinking had been the opposite of mine. To them, protecting Koko from emotional stress far superseded the need to be honest with her. Although it had occurred to me before saying “you know, she is going to die while we are gone,” that it would make Koko upset, I went ahead, thinking that confronting the ugly truth would only make her stronger. But then again, she got violently ill two days later, so I was evidently wrong about that – at least in the short run.