Does anyone remember when there was no weed to be had in China?

For years the only reliable thing a smoker could get his hands on was the sandy Taklamaklan Tan, served up by your local lamb skewer proprietor. Joints of that stuff made your head ache and provided a dull high. It was tough to get that dry sand to burn properly. Then for a while travelers would come up from the Southern Silk Road with a bag of seedy shake and tales of “weed bushes 2 meters tall, growing wild in the streets of Dali…” – even then the smoker’s circle was a confined one. Travelers only, with a smattering of local hippies. The supply was sporadic and the quality was always poor. Few people were actually growing their own and those who were did it for personal use only.

Then those hippies turned their friends on to it and we had small time dealers, setting up shops in obscure locations or just sitting at the local joint, waiting for a friend of a friend to sidle up and ask about a gram or three. Selling weed became a business, and not just a luxury to be enjoyed every now and then. Some people made good money, and turned their tax free cash into regular businesses. In fact, I remember a group of scallywags rolling up joint after joint and selling them out of cigarette packs at the old Reggae Bar (RIP) just to make rent. They made enough to buy tickets out of China to San Francisco, where they eventually ended up on weed farms, making that big big weed money. So the tales say anyway.

Those days of scrimping dust off of the table and rolling lopsided spliffs are over and we are all grateful for the current state of supply.

Good weed is not hard to get anymore. I take pride in the fact that I witnessed the transition from schwag weed to kind bud both in the US and here in the PRC. But with good weed and a flourishing community of smokers come other issues. In the US there is the grey area between legal and illegal that has spawned an ingenious society of growers, sellers, and buyers that have collectively made the weed legal in 14 states and counting.

Here in China, we had the hey day of free weed smoking. I saw cops light joints at music festivals. People smoked publicly – within reason – and had little fear of being arrested and thrown in jail. Even if a cop or a random passerby asked about that smell, you could always brush it off as “American Tabacco” or just “my medicine”.

The Chinese authorities have caught on and in typical fashion, they’ve gone on and labeled weed a dangerous, addictive drug and the dealers that sell it delinquents and a threat to harmonious societies everywhere. 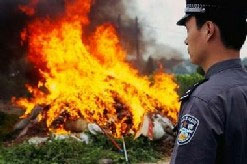 A Nanfang Daily report on marijuana, “Investigation on the Internet Marijuana Trade,” details a reporter’s efforts to buy marijuana online, via QQ, Tieba and Douban groups. The reporter posed as a buyer and a seller, lurked on forums, and chatted with dealers selling weed for 100RMB/gram plus delivery fee.

“In this month long investigation, the reporter found that social media platforms such as Baidu Tieba, QQ group, and Douban group have become gathering places for users and dealers … dealers contact buyer via Q, buyers order online and the goods delivered by express mail.”

The article goes on to mention common mis-conceptions about marijuana, such as smokers gaining inspiration from the weed, or that weed is not addictive.

“Doctors warn: marijuana is addictive and can do serious harm to one’s health. It’s cheap and easy to get. We should be vigilant that it does not become the new popular drug.”

Interesting, isn’t it? How the same processes repeat themselves over and over, regardless of culture, nation, or epoch.

Granted this is only one article, but if marijuana is in the Chinese media, then the government is taking notice. Police across the nation probably have a copy of this article on their desks – along with pounds and pounds of other documents – attached to vague directives on how to handle the problem.

In the old days, you could more or less count on the police not caring about or not recognizing marijuana as a drug. But according to Chinese law, both heroin and marijuana are in the same category. Sound familiar to any of you Americans out there? I would imagine that some regions – especially larger cities and the southwest – may have specialized drug police who have samples of weed (the current supply strain most likely) and a list of locations, QQ numbers, and members of Douban groups that may be smoking or dealing marijuana.

The article specifically targets Internet dealing, which is interesting, because the vast majority of the dealing I have seen is done face to face. I didn’t even consider that weed could be sold and delivered, by locals to locals, via Internet platforms. It’s kind of breathtaking to watch the game proceed so fast. The demand seems to be growing among locals, which is a great improvement on the previous drug of choice: stepped on ketamine mixed with meth and lord knows what other white powders, but the government doesn’t see it so.

The Internet angle makes me wonder too, about the desire of the Chinese authorities to control something increasingly uncontrollable. This story about weed on the Internet came out the same day as a story on a new requirement prohibiting registered Internet companies and journalists from re-posting foreign media content without prior approval.

I don’t really see a crackdown on marijuana a la Strike Hard in the tea leaves, but I would definitely watch my back if I were in the weed game. Nobody wants to be made an example of.

Weed as a Symbol

Something that every weed smoker knows, but may elude some police, is the power of weed as a symbol of rebellion and disenfranchisement. Drug use in general tends to be anti-authoritarian, but weed in particular tends to gravitate to where the rebels be, even if it’s just around a seed-covered living room table. I wonder if that plays any role in this. Heroin and ketamine in China were also big, in their own time, but heroin users tend to keep to themselves and ketamine sniffers stick to the KTV rooms, where their cop buddies can shield them from harm.

Weed is a people drug, harmless and engaging for the most part, with the worst case scenario being a slight paranoia and inability to communicate with strangers. But weed can spark discussion, and that’s bad for oppressive governments.

285 thoughts on “Marijuana in China”