The global phenomenon of mixed martial arts and the UFC has been on a global tear in recent years. So when I recently received a WeChat message from a friend about a “UFC style fighting club” recently opened in Chengdu’s Poly Center, I was curious. My interest was heightened when he added: “My friend says there’s blood and teeth flying. You should go.” The next message which only said “Not entirely legal” cemented my interest.

The entry price of 60 rmb paid via WeChat seemed like a paltry sum to witness amateurs volunteer to get punched in the face in Chengdu’s notorious Poly Center, so I bought two. I was excited to see what the atmosphere inside a Chengdu fight club would be like, and to bring a friend with some MMA knowledge, so I went with Jerry S, local Brazilian jiu-jitsu black belt and fellow American. 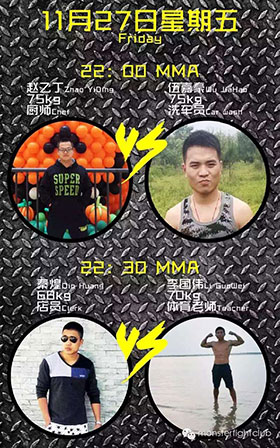 The promotional flyer was sparse on info, listing the four fighters of the evening along with their name, weight and occupation:

After being introduced to Monster Club over WeChat, I was connected with one of the organizers, a burly 20 year old Sichuanese local named Vito. Describing himself over WeChat so I could find him on the street: “I am short but strong, wear black police boots and jeans”. Vito is about 5’6”, weighs 100 kilograms, and looks like he lifts weights between meals.

After meeting Jerry and Vito outside of Poly Center Building D, which hosts Monster Fight Club, we took the elevator to the 4th floor. Going up the elevator it was clear that the tatted people around us smoking in the elevator were headed the same direction as we were. Affliction t-shirts adorned with flames and skulls are a dead giveaway.

Stepping inside with Vito, we were enveloped by the purple glow of backlights and confronted an imposing, all-black cage on the first floor. A staircase on the right wrapped around the cage allowing spectators to watch from above. The room was starting to fill up before the first fight, scheduled for 10pm. 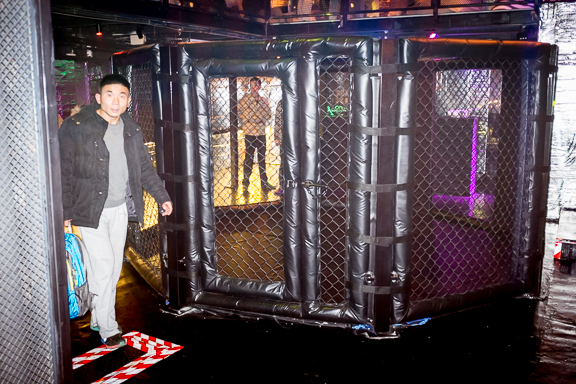 Entrance to Monster Fight Club includes an open bar, except they do not serve beer: only vodka and gin. I grabbed a vodka on the rocks and went upstairs to stand along the second floor railing. While waiting, loud dubstep music blared through the speakers, creating an atmosphere of chaos and aggression in this entirely black room slickly illuminated with ambient lighting. A single spotlight shone directly into the middle of the octagon cage below.

The first fight was between the clerk and the teacher. The teacher had undeniable marks of a Sichuanese local: potbellied with fresh cupping bruises across his back and a shaved head with a tuft of hair on top, as commonly seen on Chinese infants. 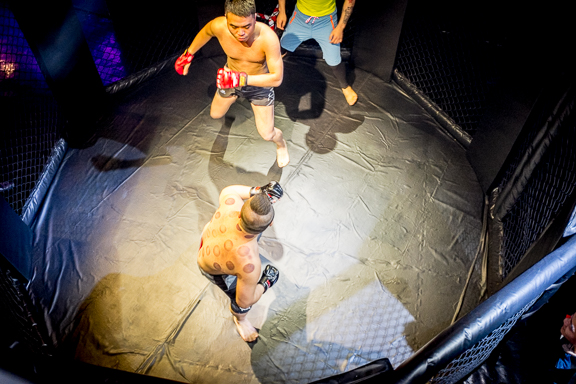 The tenacity of the fighters was impressive, and due to the 15 foot diameter of the cage, both fighters are confined to a very small space. There is no room to hide. After taking some shots to the face, the fight went to the ground where the teacher put a heel lock on the clerk. Wincing in pain, the teacher did not want to give in. As the crowd cheered, he lied on the mat in pain as the teacher eventually submitted his adversary to cheers. The fight lasted about five minutes. During the 15 minute wait between fights, Jerry was bombarded with offers to step into the Monster Fight Club ring to demonstrate his grappling skills. Word of his work as a jiu jitsu instructor in Chengdu had spread. After repeated attempts, would-be match makers including Vito left us alone to watch the fight, moving to a few other expats in the crowd. The second fight featured two semi-professional fighters, both employing signature muay thai punches, kicks, knees and elbows. Their physical condition and ability of these fighters far exceeded the first two, but the fight was over quickly when one fighter was submitted on the ground after being punched in the head. 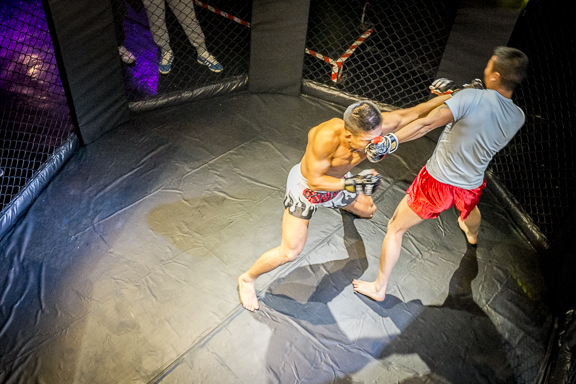 After the second fight was over the dubstep soundtrack resumed and Monster Fight Club quickly begun to clear out. On our way out we passed a table of Monster Fight Club magazines, one showing a smiling and bloodied man reminiscent of Edward Norton in Fight Club. The other showed a Chinese man getting punched in the face with the message “Fight! Release yourself”. 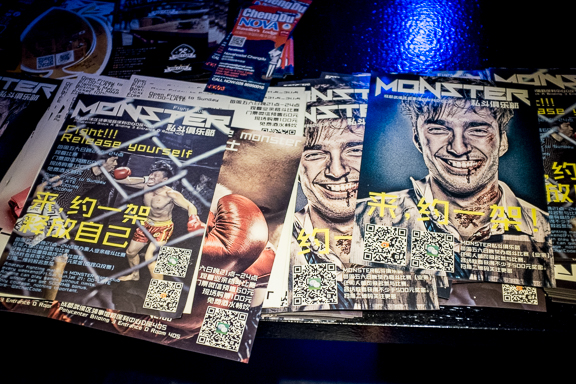 If you are used to watching UFC, this is not quite that. This is a hybrid of Fight Club’s depiction of blue-collar locals seeking visceral excitement through combat, and the organized sport of mixed martial arts. The skill of fighters does not come close to what you’ve seen in UFC matches, but there is a gritty realness to knowing the real-world occupation of someone getting choked within your physical proximity. And since this is inside the Poly Center, many of Chengdu’s most well-trafficked bars (like Here We Go and NASA) are in an adjacent building. 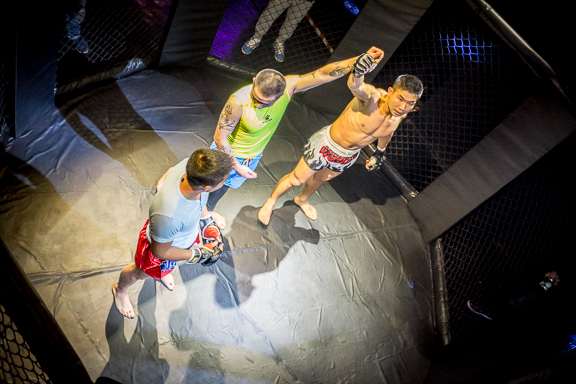 Would I go again? Yes, especially with friends visiting from out of town. Hopefully Monster Fight Club sticks around grows toward greater legitimacy. I can see a scene growing around this place.

If you’re interested in checking out Monster Fight Club, here are the details:

If you visit, I recommend getting there by 9:45pm and securing a good position on the second floor. The best view is right along the rail, directly above the cage.