China’s real estate boom is one massive swindle. Not only are billions being spent on empty cities and lonely skycrapers, but a comparable amount of money is being spent by property owners on furbishing and re-furbishing their new apartments with shoddy work, overpriced appliances and other useless trappings of the wealthy elite. Apartments sold for millions of RMB are structurally worth much less and the cost of outfitting one of these apartments reaches the price per square meter of buying one in the first place.

The devil in many cases is not just in the spectacle of a slowly decomposing city in the desert, but in the exorbitant fees being doled out to under-qualified and downright unscrupulous detailers who wouldn’t know a level from a jackhammer.

We Don’t Need No Ruler

Wealthy Chinese are buying up homes and they often sift through catalogues for a set package. The package is then handed over to a design firm or construction company that prints out intricate 3D renditions of the home for the client. The problem is, farmers can’t decipher 3D and most if not all of the workers putting together the cabinets, measuring out the dimensions of windows, and tiling the bathroom walls are cheap countryside labor accustomed to cheap countryside construction methods. 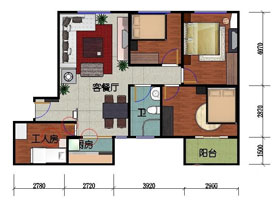 Everything gets measured using the ??? (chabuduo = near enough) maxim, especially when the plans are written in the equivalent of a different language. Just because the home costs 100x what a farmer pays for his house does not mean the quality of anything in the home is anywhere near the same ratio. The concrete is watered-down, the wood is knotty, the metal is thin, the screws strip easy, the silicon peels, the tiles crack and every single measurement is off. So for one house I stood in and marveled at, the difference between the lowest point of the floor and the highest point was 15cm. That is quite a difference.

Most customers have no clue that the tiles in their bathroom are uneven, that the cabinets aren’t flush with the walls or that the walls themselves lean. For them it’s just a matter of dishing out the cash necessary for the designer couch, brand name toilet, the western style washer/dryer and surrounding everything with the best Ikea has to offer.

But if you happen to know something of construction, then you will end up puling your hair out in frustration as yet another crew of workers walk off of the site because they were required to add level after level of flooring just to reduce the discrepancy from 30+cm to 15cm and that is something that is just way out of line. The vast majority of a crew’s clients will never require them to fix or re-do a thing – when they are forced to do so for the same wage, then outfitting a house can stretch out across months and months.

And why go through all that trouble when it was good and chabuduo to begin with?

Everyone’s In On It 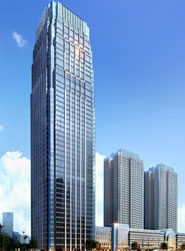 The new middle class wants things like washers and dryers, water softeners, international brand name toilets and sinks and they are willing to pay for them. The drive to not only be wealthy but seem wealthy gives construction firms the license to sell three water softeners to one home for $6,000 USD a pop when one will suffice for anything save Buckingham palace. (The parts to make one in China cost around $600 USD and a manual can be found online; a comparable water softener in the US costs between $600-800 USD).

International players like Kohler and G.E. are aware of the big bucks to be made off of wealthy yet ignorant Chinese homebuyers. Kohler manufactures sinks and toilets in China (definitely NOT for export). The sinks are often not flush and the toilet seat comes with one set of screws, nuts, bolts and clamps. If the set does not fit the design you had for your bathroom, then you are out of luck. Kohler does not service anything and will not sell one single screw. Kohler in Sheboygan and elsewhere probably has a different track record for service and quality, but in China they (or their local partner) can get away with bad quality, unresponsive service and still be able to charge more in China than for the same product sold in the USA.

G.E. sells their older model washers and dryers here in China. Not only are Chinese buying an older product for around 10,000 RMB, – almost twice the price of GE’s newest and most popular model – but few, if any, Chinese homes are designed with a washer and dryer in mind. Installing a washer and dryer is not rocket science, but it does require a bit of know-how; how many contract laborers scoured from the underpasses along Chengdu’s Third Ring Road have any clue how to install one? The answer is not many. One homeowner put her washer and dryer in a room in the basement. When the black mold took over the room and started invading the rest of the house, she called up and asked,

“You have a washer and dryer right? What do you do with all of the black stuff?”

The Bubble From the Bottom Up 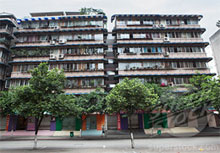 In Chengdu, property value within the Second Ring Road has doubled in most places and tripled in others over the past two years. All of that value is speculation. The buildings themselves are already cracked and peeling. In some cases, such as the new high-end complex near Jiuyanqiao Bridge, low-quality steel and concrete is causing the building to actually twist toward the top… resulting in constant calls to Otis to repair the elevator…

But property owners are paying more for their apartments and investing everything they have into property because, regardless of what condition the building is in, the price jumps 100% every 6-10 months. Each jump allows brand name appliance and furniture companies to widen the profit margin an inch. Construction companies make more, design companies make more, fabric and wood suppliers make more. It also gives an army of laborers from the countryside a living wage and the ability to walk off of a demanding site to do another quick and sloppy job for some rich city slicker. 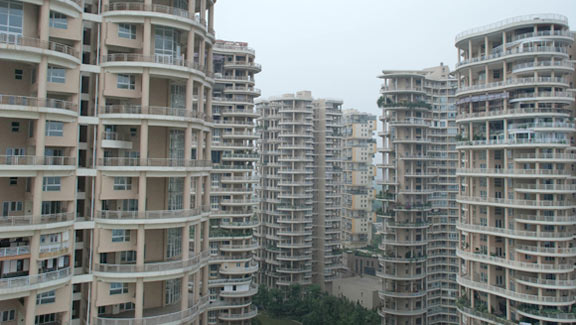 How long can it last? No one in the industry is asking that question out loud. If they’re smart they’re stacking cash for the rainy day when Chinese homebuyers either wise up to the pig’s ear they’ve been sold or the price train just plain runs out of steam and comes rolling down the hill taking everyone down with it.

Until that happens (if that happens), then homebuyers will have to take solace in the fact that, although not a single line in their new home is straight, the value still shot up from 4000 RMB/m2 to 12,000 RMB/m2 while they were getting the furnishings done.