The Chinese art world is in the midst of an upheaval driven by the economic, political and social impact of every work that makes it out into the open. Are Chinese contemporary artists all rebels and dissidents? Are they just taking advantage of a wave of interest to cash in? Both? We will be interviewing artists around Chengdu and Sichuan (and eventually elsewhere) and learn what they think of themselves, their art and the role of the artist in society. Here is Tabitha Brown on Chengdu painter Luo Fahui:

The instant I saw Luo Fahui in his palatial studio outside Chengdu, I knew I was looking at an artist. His piercing, good-humored expression gazed out at me from under his bald crown without sarcasm. Narrow shoulders clothed in the characteristic monotone shirt suggested a dark-clad modesty behind those scandalous paintings. It was the middle of the day and we were sipping tea from class cups in his tall whitewashed home. His wife had on a pair of purple tinted sunglasses. I felt like I was sitting inside a heated igloo. 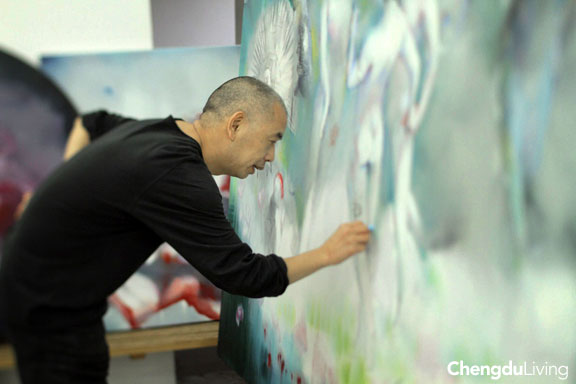 He Tang Yuese (????, Moonlight on the Lotus Pond) is where Luo built his home. One of a collection of fourteen artist lofts, including that of He Duoling, Luo’s home is a testament to what an artist can accomplish in China and also what the artist needs: opulence and solitude. Hanging above the fireplace in Luo’s lush apartment is one of his recent acclaimed works, a picture of a very young boy and a tiger. The boy’s features are obscured and he’s mounted atop the small tiger as though riding it, its head in profile and one eye almost on the viewer. Both tiger and boy look hastily painted, in a flurry of passion–at first. But then you look closer: many deliberate strokes and a bleeding of the paint coalesce to give these bodies a heightened transcendence, an eye-popping ethereality.

I asked him what he thought was most significant about this boy’s posture. One of its hands is thrust into a fist in mid-air while the other clutches the tiger’s neck. My friend, Liang Wei, interpreted for me:

“The boy is based on a character from classical Chinese literature, Wu Song. Originally, he battled the tiger and killed it. But this painting does not depict the original scene, where Wu Song wields a spear and takes the life of the tiger and gets away…In this version, the boy is not subduing the tiger, he’s just mounting it cockily, and he is missing his weapon, his spear. The boy is meant to symbolize China’s overconfident middle class. There is some serious political and social commentary at work there.”

Gesturing toward the back of the apartment, Luo took us through the door into the 90-foot-square garage where some of his recently-treated canvases were being aired out to dry. We chatted in front of an electrifying blue, turquoise, yellow, and gray painting with an illuminated, almost religious-looking figure in the center. We had about a half an hour together, then Luo and his wife slipped out the door very quickly to catch their flight to Scope Basel in Miami, the site of his most recent show. 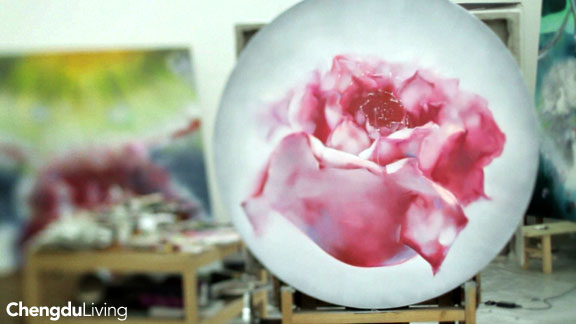 I am standing transfixed in the studio loft of Luo Fahui. Beside me, sculptures of both convincing and cartoonish nudes posture about the heightened suggestiveness of grimacing skulls and opening rose petals. Huge canvases stretched over frames cover the walls, their colors–gray, orange, red, green, yellow, blue, turquoise–unmistakable. Unmistakably Luo’s.

The Spanish art critic, Marcos-Ricardo Barnatan, wrote in his introduction to the artist’s book: “…In the West, the nude corresponds to an invincible need for the absolute, an inevitable search for essence…But this breaks down once and for all in the modern era, where all systems of property disintegrate and the body is literally discovered…allowing eroticism to flow freely…that is the procedure followed by a modernity that paints those glorious bodies– distorted, damned, exalted, embellished or simply manifest…It is this modern game…to which the painting of Luo Fahui subscribes. (22)” 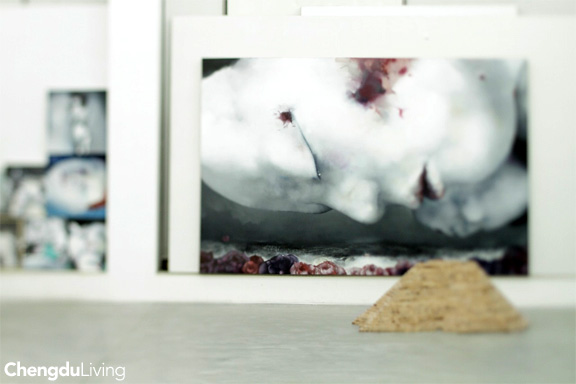 Luo’s work is not just erotic, but dirty. In some of his paintings, this dirtiness is straightforward- we get to see a woman’s legs spread out in front of us, or a naked subject seductively stroking a flower or skull as if it were an impressionistic take on tattoo art. At other times, the flower is exploding, gushing forth its bloody red entrails, or the subject is likewise bleeding. All of his work is partly sexual, partly about decay. There is little of struggle or fighting. There is a lot of dominance and submission. Even the boy and tiger look to be caught in a sadomasochistic lovelock rather than a death match.

One thing that’s increasingly clear is what has become a trademark of much contemporary Chinese painting: its color. All color in painting is symbolic and in China, the significance of color is potentially explosive. When Luo chooses red and gray to emphasize his subjects’ vulnerability, their woundedness and alienation, he is not only speaking to a post-Modern sexual appeal, he is evoking the destruction and resurrection of hurt in China’s Cultural Revolution and the shaking historical events of the past half-century. Chinese artist and scholar Wang Lin writes of one such painting, Female and Flower: “[The painting]’s being a symbol of desire is but a secular metaphor; from this starting point, Luo Fahui aims to probe, seek out and expose the physical, psychological and spiritual changes that happened to the Chinese people after they entered the so-called socialist market economy.” 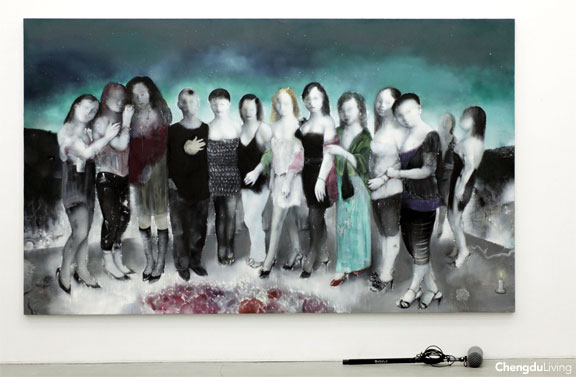 To put it otherwise, Luo’s work parodies many Western concepts of the nude and nudity, but not in a way that we are used to. Spun into his work, along with the bodies, are ideas–ideas of things we may not recognize: a person from Chinese mythology, a scene from Tiananmen Square. In the nudes are both the objectivity of desire and an untouchable frailty, a cosmic letdown. What is he depicting? Is it really sex?

Luo himself wrote, in one artist statement, “Painting is actually my expression of ideas, of my spiritual and emotional desire to be realized in an independent way. Painting is my own space where I hope for sublimation – to experience freedom of thought and perfection of life, to experience the language of the primitive and the inner emptiness. Such an easy and pleasant existence, and a passage of life which I wish to continue.

But the intentionality behind his paintings is not directly linked with politics. Thinking on this subject, Wang Lin writes, “He is not a thinking-type artist who challenges the social awareness with concepts and schema, but a feeling-type painter who depicts the potential changes in the society’s mental activities with his sensitive neurotic reactions.”

For excerpts of an interview with Luo Fahui, go here. 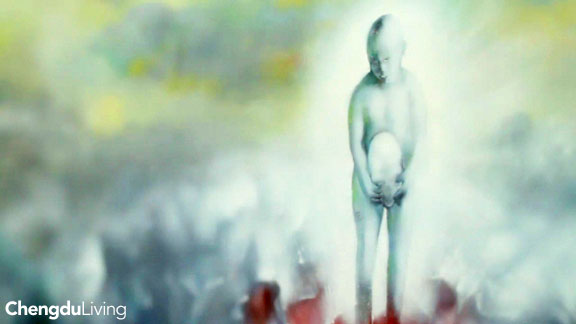 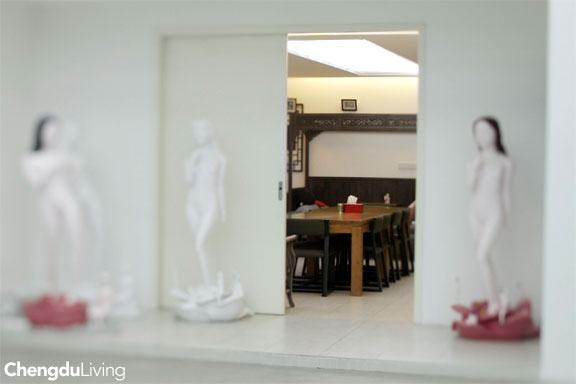 13 thoughts on “Portrait of a Chengdu artist: Luo Fahui”