Being a Daddy has given me some perspective on the importance of community. When Hillary Clinton once famously said that “it takes a village” to raise a child, I remember people finding that funny, or even chauvinistic. I wasn’t sure then why, but now I am sure that Hillary was spot on. Anyone with little ones knows that look in their eyes when they spot another little one. The curiosity is just short of longing. Even through the fights over toys and scraps and screaming, the bond that forms so quickly with the so very young is so very, very vital.

I wish I could retreat into the woods and raise my children on a mountainside apart from this world of petty emotions, but that’s something that I want. My sons would mourn their exile.

And my wife would resist, because women know better than anyone the power of a tribe. Several moms together with their children walking the streets are surrounded by a bubble of impenetrability because their undertaking is of the utmost seriousness. Raising the next generation is something that we in our hearts realize is the number one vocation of humankind. Everything depends on doing it right.

But how do we know what is right and what is wrong? Even with all of the millions of words written on the topic, only trial and error work. We are constantly adjusting to a tiny individual as he/she blossoms beyond the point of attachment and into self-awareness. For that it’s nice to have like-minded people around to help decipher, to provide a comparison, and to improve the way one goes about nurturing a little human. 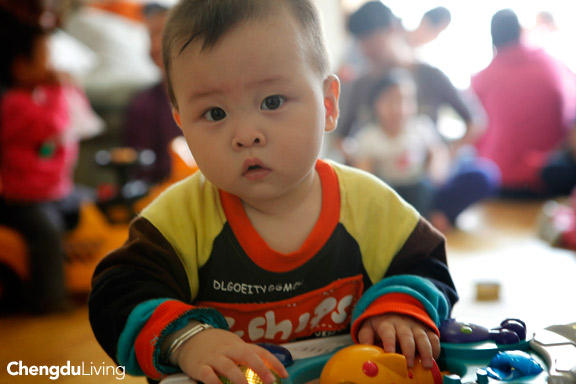 Groups of women chattering while toddlers amble about gives me a warm sense of pleasure. I feel exquisitely male when I walk into a room filled with crying children and soothing moms. It feels right and natural that mothers should band together to raise children while I go about the less important business of making sure the roof stays over everyone’s head.

In my experience, children under the age of 2 need mom around all the time. Dad is cool and should be around as often as is dadly possible, but terror is the absence of mom. 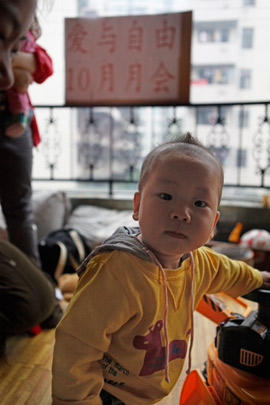 In China mom and dad usually have to work a lot and childcare is given over to the grandparents. That rubs some moms raw. Not all women want to be rid of their children so they can work/play and not all grandparents share the same parenting vision as today’s mothers. Moms who have their own ideas about natural birth vs. c-sections, breastmilk vs. infant formula, plastic toys vs. wooden toys, jungle law vs. supervised playtime etc. must step in between the grandparents and the child in order to make their own visions real. They also need support because a mom alone against the clan in a struggle over “what’s best for Stinky” can quickly turn ugly.

So most moms in China turn to online baby groups (mom-ified chatrooms, basically) for information, support and baby products. A community forms online and spills over into real life as moms get out of the house for a trip to the park with the kids, or arrive en masse at my house to let the kids run wild. These communities are popping up all over the web (and in an informal preschool/Sascha’s office near you) and the key development here is not just the creation of communities, but the establishment of a philosophy of parenting that takes what mom’s in the West have already gone through and applies it to China.

Which basically translates into, How can I get access to the best possible things for my child? Its not about survival anymore. It’s not about ducking your head down, not getting thrown in re-education camps and getting a job anymore. It’s about them being something more than what we are, giving them the choices that we never had. It’s about the New Chinese Man and Woman, not the old, terrified, shoe-less, obedient peasant.

Chinese middle class moms want everything that American and European middle class moms have and they are banding together to learn the techniques, resist the local thought police and buy all of the best baby products available.

Something I find fascinating is that Chinese do not generally meet up with strangers, in a stranger’s home, and let the kids run wild with each other. That’s actually not that common. Or wasn’t. Child-rearing here took into account the whole “it takes a village” idea in a very concrete way. Clans and extended families banded together and formed the village for the children. Most people in China don’t (didn’t) move around much, so the neighbors might just be family.

Now though, mom groups are forming up based on philosophy. It’s not about where you live anymore, it’s about how you live.

This, in my opinion, is the type of grassroots change that can bring about true social revolution. I admit it, all my life I thought (and when it comes to Wall Street, still think) that violent rebellion is a must before any real change can take place. Being a Daddy and walking in on a room of poopie-butts and mommies with one breast out has taught me that soft changes are the core of true change. I guess my job is just to make sure the roof doesn’t leak and body slam any men who dare disrupt playtime. 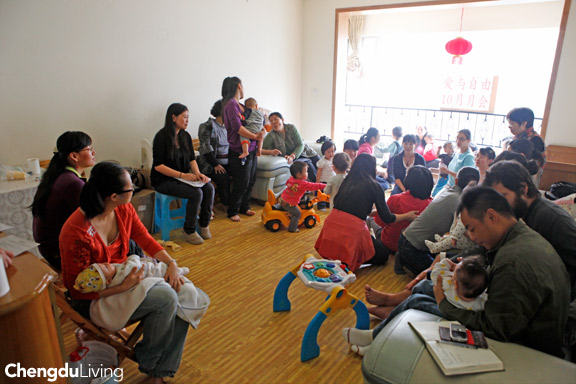 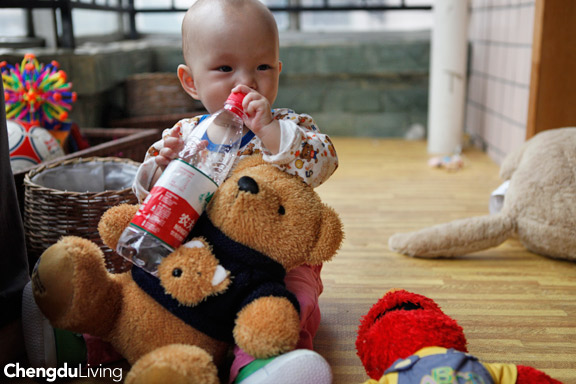 8 thoughts on “Raising a Child in China: Mama Groups”