This morning I stepped into the elevator and noticed a good looking young kid, maybe seven or eight years old, with slightly brownish dyed hair and an unmistakable curve to his features that told me he wasn’t all Asian. His grandmother was right behind him and he kept his head down when I entered, but his grandma perked right up and got the face many grandmas get here when they catch a foreigner near their grandchild. The expression of hope (oh please please let my child become friends with this foreigner) and fear  (oh no oh no what do I do, how do I act?) that tends to mortify the kids.

Naturally, I left the kid alone because his body language told me that he didn’t want to be noticed right now. But his grandma wouldn’t leave it alone and said,

“Hey, it’s your Lao Xiang (someone from your hometown)!”

“Not necessarily,” the kid grumbled.

“Yeah I could be from Germany,” I said.

As we left the elevator I looked back at him again as he clutched his grandmas arm tightly and avoided my gaze. I asked him again if he spoke English and they replied yes in unison, grandma loudly with obvious pride and the youth in a whisper with a slight blush. Then they were gone. I watched them go and I couldn’t help but notice how tightly he squeezed grandma as he went and how obvious his unique looks were among the crowd of kids filing into the school yard. 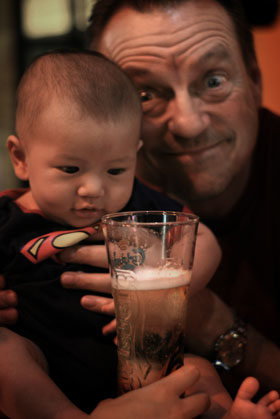 This was a brief interaction that took all of one minute, but it got me thinking. I would wager that the kid does not flaunt his mixed-blood status and tries to deflect it any time it comes at him. I also suspect everyone in the school knows he is a mixed-blood and there is probably a group that calls him hun xue’er (biracial) — maybe not the other kids, but someone sure does and not necessarily in a bad way. They probably mean it as a mark of distinction. As something that not only sets him apart, but sets him above the rest.

I bet that kid was raised here in China by his grandparents and he is desperate to be normal like everyone else but deep down he knows he’s not and he’s been treated with deference all his life and I just tried to get into that mind state and figure out what I could do to help, because I got a little mixed-blood of my own and I see how this society treats him.

They love him too much.

Wherever we go, we get looked at. Every woman within 100 meters peers into my arms or into the stroller to catch a glimpse of our son and when they see him they always squeal. Then they look at us and ask the obvious, is he a mixed blood? And when we nod with that tired polite but still proud smile they coo and dip in for a closer look. As soon as one lady dips in, every other lady on the street who has been surreptitiously watching scurries over to get a look too.

My son is a ham. He is a good looking kid and he loves the ladies and loves to smile. He has two dimples and long eyelashes so the ladies always go wild when he flashes that three-tooth grin at them. They all clamour to hold him and the cool thing is, we know it’s all good. We’ve been to dozens of restaurants where the boss lady has taken him out of our arms and paraded his grinning little ass all around the shop for everyone to squeeze and coo over. They clap their hands at him; ladies jostle to be next in line to squeeze him; men gather around and praise his alert eyes and long legs. He’s perfectly safe in their arms.

Then the inevitable comparisons come:

“They are stronger too.”

“‘Chinese kids can’t handle the cold like mixed blood kids can, notice they don’t dress him up as thick?”

“Yeah and I bet they don’t use baby formula either do you?”

We confirm that no, Momma breastfed him.

“See? That’s why his skin is so soft and white!”

“And his eyes are so alert and lively!”

“And his grip is so strong!”

“Look at those dimples!”

And on and on while my son just grins like a fool and tries to bury his head into every woman’s bosom.

We definitely take advantage of it. When he’s getting tossed back and forth, we gobble food down as quickly as possible because when he’s around one of us (usually Mom) has to hold him and eat at the same time. It ain’t easy. My wife positively relies on the kindness of strangers. She’s been frequenting a post-natal treatment clinic recently and the nurses take care of Mom and her son. 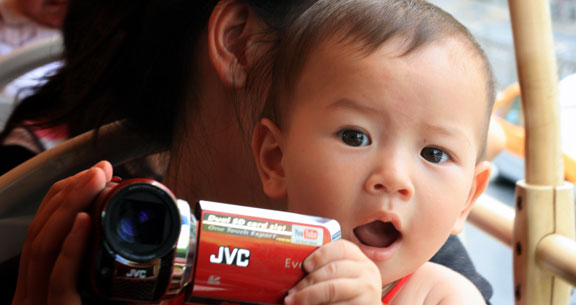 The people on the street never show even the tiniest inkling of animosity, racism or jealousy to my boy when they see him. They treat him like a treasure and if I gave him the chance, he could probably get every one of those old ladies to give him a cookie every time he happened by. Maybe I should teach him to hustle his Otherness …

But something doesn’t feel right. Just like when I am the superstar here in China, I know its not real. I’m just different and the way I get treated here — no matter how much respect and love might be behind it — its not because of me, its because of some skewed perception of race and status and class. And therefore it’s all fake. Maybe I should teach him hide his Otherness …

I’m not sure if I want my son to grow up special/strange in China, where concepts of class and race are so one-dimensional. My wife is certainly against it. She wants him to grow up in a multi-cultural type of environment where his bloodline doesn’t really mean that much. So do I actually. Maybe I should take him to where he is not considered to be the Other …

When I was a kid in fifth grade, my teacher Ms. Ewart had a Third World Breakfast and I happened to sit at the First World table. Our table had ham and eggs and toast and juice but the other tables had gruel or just plain water. Instead of sharing my stuff with them, I led the gloating parade around the classroom. I threw pieces of my left over sausage on one table. I laughed the loudest and hooted the most. It was pretty bad and when I finally came to my senses I was so ashamed of myself that I broke down and cried in the boys room instead of staying in class and listening to the other kids read out the essays describing their feelings about the exercise. I knew what they would say; I was the example that helped teach everyone that day about power, class and greed.

I want my son to learn what I learned that day. I just hope he can learn from his old man’s mistakes so he doesn’t end up holding shameful acts in his memory for 20 years or being too fearful to answer for himself when someone asks if he can speak his daddy’s language. Maybe I should just make sure he knows me real well.

92 thoughts on “Raising a Child in China: Mixed Blood Prince”