Editor’s foreward: As we pass through the three year mark since the 2008 Sichuan earthquake, we reflect on what happened that day. Many of us in Chengdu experienced the earthquake first hand, whether we were in the relative safety of Chengdu or in mountainous regions nearer to ground zero. After the main seismic event, many of us ventured into the quake zone to help out by carting water and supplies, telling jokes, hearing and sharing peoples’ stories … whatever it took to feel involved in one of the biggest events of our lives.

The following essay is from contributor Elias Witman, who spent an extended period aiding reconstruction efforts in a village devastated by the 2008 earthquake.

I awoke to the sound of a rooster call on a cold November morning in Jing Jia Cun, a small mountainside village in Beichuan County, northern Sichuan. Below my blue government-issue emergency tent, fog lingered in the valley, forming an eerie haze over the leveled remains of what was once the Qiang minority’s (??) regional capital. The municipal city of Beichuan bore one of the highest tolls of fatalities in the quake of May 12, 2008. Earthquake-induced landslides and flooding entombed 20,000 people in the mountain valley, including 1,000 students who were attending class at Beichuan regional high school.  I was staying in one of the few standing homes, here to help out any way I could.

Our host was cooking rice porridge and spicy vegetables to fuel us for hours of cutting bricks. Today we would continue chiseling away bits of housing debris and mortar from the brick rubble of the Dui family’s former home.   Too poor to buy new building materials, the Dui family, like millions of others in Northern Sichuan, had to rebuild their home from the pieces of what the previous year’s earthquake had left behind.  We worked to the rhythmic echo of chisels, sometimes in sync but often in discord with the sudden clang of metal against stone, metal against plaster, metal against concrete: the sound of progress, the rebuilding of homes and reclaiming of culture.

This was my first trip to Beichuan, and over the course of the next two years I became well acquainted with the mountain town of Jing Jia Cun and the broader post-quake region. This particular trip was small in scale: I was the lone foreigner, accompanied by Yezi, our driver and two female students from the South-West Finance University in Wenjiang, Liu Yaqing and Li Jiehao.

Yaqing, Jiehao and I established rapport by sharing college stories as we chopped through rubble for 9 hours. When asked about my undergraduate studies, I discussed my passion for environmental studies at the University of Vermont and shared various anecdotes of tent city living and hunger strike protests for social justice. 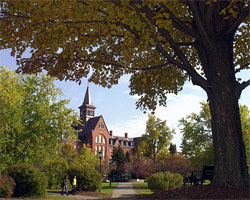 Oh “fumengte da xue” (Chinese pronunciation of the University of Vermont),” Yaqing said knowingly. “They have a strong environmental program.”

“You have really heard of my school?”

“Yes, University of Vermont,” she replied knowingly. “I learned about the tragic murder of Michelle Gardner-Quinn. Her story and vision of a peaceful planet inspired me very much. I wrote a long letter to her foundation.”

My thoughts spun around the fact that two people from two vastly different places were inspired enough by the compassionate visions of Michelle and the horrors of her death to travel to Beichuan and sift through rubble for hours on end.

Replenished from our breakfast, the four of us walked out from our blue tents and down the lone mountain road to our work site. Motorbikes and tractors grumbled past and the occasional Dongfeng dump truck bumped along, hauling bricks at a snail’s pace. Jiehao fit the profile of a young journalism major in her argyle sweater, green knit cap and sharp orange-rimmed glasses. She held a cigarette in one hand and clicked on her cellphone with the other. Yaqing peered out at the scarred slopes of the mountains, her brown wool coat speckled with gray dust. 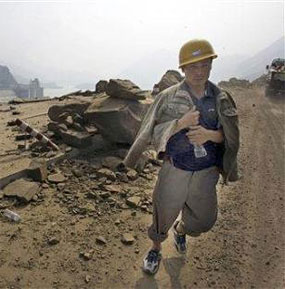 We reached the new work site, a rooftop undergoing reconstruction, and received our orders, to clear the old tiles and mix cement.  Gradually the sun poked its head out from the blanket of clouds in the valley.  We stood three meters high on a wooden plank wedged between the house and the hillside. Yaqing handed me a bucket of old tiles and I passed them down the line to Jiehao — together rebuilding this ruined house piece by piece.

With each cyclic pass, I came to think of us as small links in a chain connecting Han Chinese, China and the US.  I thought how privileged I was, to have freedom over my life and the ability to choose how I spent my days, in sharp contrast to those whose lives were destroyed by the earthquake.  This “tile brigade” showed solidarity, support between Chinese and foreign college students, city-dwellers and villagers, an act of bridging cultures in the aftermath of the disaster.

I heard the crunch of splintering wood and a piercing scream  “aiiiiiyeeeaaa,” as Yaqing fell four meters through a hole in the roof, landing on her back as she hit the concrete floor.  Jiehao and I dashed over the wooden plank and down into the kitchen of the house below.  Yaqing was unable to speak and lay moaning and motionless on the ground.

An older woman in a maroon coat and white arm warmers came to her side.  Jiehao and I were in a state of shock and terribly worried about Yaqing. Was she paralyzed? Did she have internal bleeding?  I offered my water bottle and but my hand was batted away.

“Cold water isn’t healthy” barked the woman in arm warmers.  She brought a thermos of hot water to Yaqing’s side.

I retreated to the doorway and Mr. Dui, the scruffy homeowner, beckoned me back up to the roof.

“It isn’t too high,” he remarked, looking down the hole in which Yaqing fell through.   He sparked up a cigarette and handed me the shovel and pointed to the pile of wet cement.

“Keep working, we aren’t doctors.”   He took a long drag and exhaled in my direction. I was shocked by his stoicism, but after all he had watched his whole village crumble just a few months ago.

I mixed cement with water and plopped the gray mixture from one side of the roof to the next. I tried not to look down the square hole at the scene below, but unlike the man on the roof, I was deeply worried about my injured companion. Jiehao was tending to Yaqing and the tenants had called a neighbor to take us up the road to alert Yezi, our driver, to ready our van for departure.

We rushed up the hill to pack up the tent while Yezi revved up the van. Yezi gunned down the road and we carried Yaqing into the back seat. I called a director at the NGO I volunteered for.

“There’s been an accident. Yaqing fell through the roof, she hasn’t spoken, it looks like she can walk a little but we don’t know if she has internal injuries.”

My co-worker at the NGO tried to calm us down and  confirmed that we should to take her to the hospital at the Leigu refugee camp by the gate to the ruins of Beichuan city.

After a frustratingly slow traverse across broken roads and rubble and through “earthquake tourist” induced traffic jams, we finally drove under the red and yellow banners of Leigu refugee camp.   Jiehao and I helped Yaqing into a wheelchair and rolled her inside for a MRI and an X-ray. 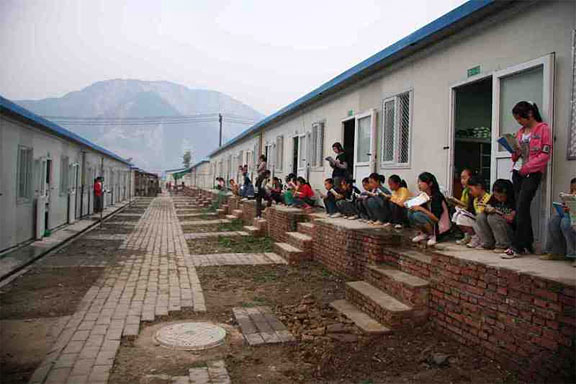 As a male I was instructed to wait outside, so with nothing else to do, I set out to explore what lay past the hospital. When I passed the local high school I noticed that the school and adjacent dormitories appeared to be a merger of standard urban architecture with the traditional stone masonry of the Qiang.

Qiang towers and white stone-tipped houses show an immediate sense of “otherness”, a strong contrast from traditional Chinese pagodas or urbanized concrete apartments. The aesthetics of these buildings allow the viewer to assume differences about their inhabitants without ever setting eye on the people themselves. Was the Han-Qiang hybrid school a message from the authorities: we are all the same? Did the earthquake bring people together? Is that what shared sacrifice does? 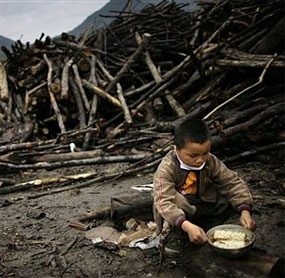 Such sociological concerns stormed through my head as I stumbled about the temporary shelters at the Leigu camp. For now, it is funds raised from earthquake tourism – solidarity or voyeurism combined with a certain sense of anguish – that provide a livelihood for many Qiang and rural Han families.  I passed long aluminum buildings that housed hundreds of families. Shop owners stared at my presence.  I felt guilty for not spending hundreds of RMB on earthquake souveniers. The selling of 5/12 memorabilia serves as the economic lifeblood for these people while also serving a constant reminder to the empty chairs at mealtime.

Then, Jiehao emerged from the hospital, pushing Yaqing in a wheelchair. She stood up, flashed a faint smile and said she’d be okay.

Later in the week I received an email from her:

It was really a rewarding experience, I do experience some pain, but I feel so grateful that I’ve gained so much help and love. People say life is fragile but I see its softness. I believe life’s preciousness lies in its softness. When the grass grows out of the soil or even concrete land, I guess they do experience some pain, yet they show their tenacity not in the way of iron shell but in the way of its green softness. And that’s life.