One of the first things one notices upon arrival in China is the thin coating of dust that covers all stationary objects. It hangs in the air, turns to black grime in the wetter climes, and in recent years has caused the urbanites of major Chinese cities to clamor through their face masks for relief from the pollution.

China’s pollution problems are nationwide, and filter through into the earth and the water, clogging streams and drying up the Yellow River. Waterways in urban areas are fetid and China’s industrialization has been described as one of the worst environmental disasters the world has ever seen. 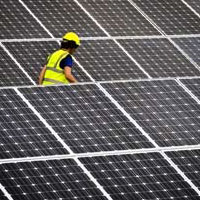 Yet that same drive to urbanize, industrialize and modernize has pushed China to the very top of those nations turning to renewable energy sources to fuel their country’s rise. No country spends more money on renewable energy, no country consumes more renewable energy, and in the coming decades, the slim lead China has now over paragons of environmental consciousness like Japan and Germany will grow to a huge chasm: by 2035, China is predicted to add more electricity generating capacity from renewable sources than the U.S., Europe, and Japan combined.

A recent report by John A. Mathews, professor of strategic management at Macquarie Graduate School of Management, and Hao Tan, senior lecturer at Newcastle Business School in Australia, argues that the it is industrialization and market expansion that has allowed China to become the world leader in production and consumption of renewable resources, and that only further expansion of production and consumption can help wean countries like the United States off of fossil fuels.

This paradox, that more industrialization can help reduce pollution in the long run, is just one of the many that surround China’s energy policy and its impact on the global economy and weather.

China is also the world leader in consumption of coal. Chinese companies are working with multinationals to dam rivers throughout western China, to extract the oil from the sands of the Taklamaklan desert in far northwest China, and on fracking projects in Sichuan Province. The automobile industry is booming, and middle class families see a home and a car as prerequisites for a happy life. Industrialization and urbanization are moving faster than ever before.

At the same time, China is laying subway tracks, high-speed rail lines, forcing cities to move factories out to the countryside, and promoting Green City initiatives across the country. And of course, no one produces or uses as much wind, solar, and hydro-electricity as the Middle Kingdom.

The effects of China’s approach to modernization can already be seen in some cities, such as Shanghai and Chengdu, which have both experienced some of the clearest summer skies of the past decade in 2014, and that following one of the worst years for air pollution in 2013. January 2013 was a watershed moment for China in terms of pollution, when Beijing was blanketed in suffocating smog. Since then, the nation has went all out to change its policies for the better.

The takeaway here is not that China will save the world with its renewable energy sector. Most Chinese solar companies are still in the red (as are most US companies as well), and many hydro-electricity projects are fraught with problems. For a world paralyzed by too much information on climate change and Big Oil tactics to maintain control of the energy sector, and lacking the political and financial will to force through a change on a global scale, China’s efforts are instructional and inspiring.

China’s model is to grow at all costs, while reinvesting as much government will and financial support into improving conditions as the economy grows. Every nation that industrialized went through a clean-up phase, China is just doing it in tandem with growth – as much as possible – and much quicker and with more single-minded determination than many China Watchers would give the nation credit for. This model creates paradoxes like “most coal burned” as well as “must solar basked in” and also allows for criticisms of the environmental mess to co-exist with awestruck recitations of the sheer numbers poured into the renewable energy sector in less than a decade.

It is a unique state to be in for a country, and nations like Germany, Japan and the United States do not share China’s urgent environmental issues. Mathews and Tan, in their report, lament the world’s lax response to the technological and economic realities China’s tandem approach to growth and sustainability present, and much of the narrative is directed at Western nations that, if motivated like China is, could presumably turn the energy question on its head.

For now, the US, Germany and Japan policies will help maintain #2, #3, and #4 positions in line after China in terms of their renewable energy sector – but considering the massive polluting backpack China is wearing on its back in this race, the developed nations could contribute much more than they are.

9 thoughts on “The Paradox of China’s Renewable Revolution”