This post, the first from Peta on Chengdu Living, was first published here on The Antill.

It’s Chinese new year, which means red paper couplets, decorations and lanterns are being hung up, and firecrackers are going off every evening like gunfire. For those who live away from their ancestral home, it also means taking part in the largest annual human migration in history to return home for the holidays, often involving a 30 hour crowded train journey halfway across the country. I would do the same, if I knew where mine was.

One of the reasons why I came to China was to discover my own ancestral home. I am a “mixed blood” child, a hunxue’er, and grew up in Singapore before moving to England when I was seven. My father is English but my mother was ethnically Chinese. Along with many others from the landed classes, her parents fled China during the first civil war of 1927-1937, when the Nationalists and Communists were vying for control of the country. Some of my family went to Indonesia and Hong Kong, but my maternal grandparents settled in Singapore. 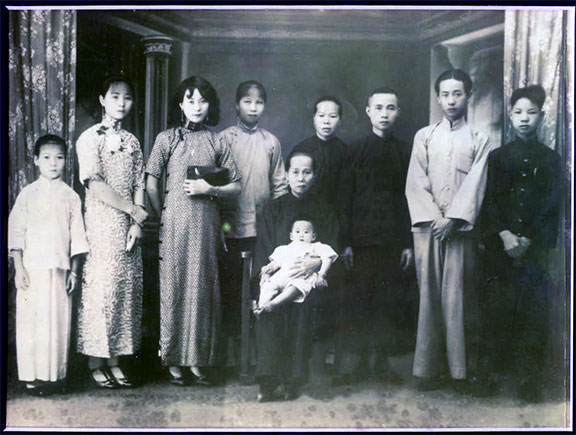 This is the only picture I have of my mother’s family in Guangzhou. My grandmother is standing second from the left, with my great aunt next to her, third from the left. Seated in the front row is my great grandmother

They raised their four children in a humble kampong, a settlement of very basic village housing. In the early 70s, when my mother was growing up, Singapore wasn’t the booming financial city it is today. But even by the standards of the time, my mother’s upbringing was a tough one. She once told me of her acute embarrassment when, at her primary school’s annual medical check, she had to wait in line in her home-made cloth underwear while her classmates wore shop-bought knickers with proper elastic.

At home, they mostly ate rice bulked out with pickled vegetables. My mother said she was able to eat four bowls of rice for dinner, despite remaining beanpole thin. The fruit and vegetables were usually the half-rotten kind that are sold at discount at markets. As a child, my mother only once ate “perfect” fruit – when she was ill, a family friend brought her a whole bunch of grapes. I remember getting an earful as a child when I tried to throw away a half-rotten apple. Then there was the chicken they kept in the bathroom, feeding with scraps from the family table before slaughtering it for the Chinese New Year reunion dinner. Each year there was a new “toilet chicken”, and as a child my mother was torn between sympathy for the family pet and excitement about eating it.

I grew up with the stories my mother told me of my Chinese ancestral history. My grandfather was from a wealthy landowning family in Guangdong province, one of seven children. Among his sisters one died as a child, after accidentally being given rat poison instead of cough medicine, both of which were kept on the same shelf in the kitchen. My grandmother’s elder sister, meanwhile, had her feet bound – an extremely painful ritual where the bones of a young girl’s feet are broken, then bound tightly with bandages so they can’t heal properly, leaving the desired “lotus feet”.

When my great aunt’s feet were bound, according to my mother, she screamed so much that after a few months her mother finally relented and took the bandages off. Her broken feet were allowed to grow, but she had difficulty walking for the rest of her life. I remember visiting her many times as a child in Singapore, bringing her crates of duty free cigarettes from England and enduring the customary cheek pinch bestowed by Chinese elders on every child. Despite smoking 60 cigarettes a day, she long outlived my grandmother, who died when I was one month old.

My grandparents had married in their teens, but my grandfather was a favored and spoilt son, and his newfound independence in Singapore allowed him to indulge his gambling habit. He lost most of their savings early on in the marriage, and his family soon stopped sending him money. He found work as a ship’s carpenter, and started to live a more honest life. My family still has a beautiful wooden chest which was made by him. He eventually died of throat cancer, after inhaling fumes from the tar with which he used to coat the decks of the ships, to help them withstand sea water.

When my grandfather was away at sea, my grandmother spent all her time playing mahjong. My mother told me she would often come home from school to a dark house, unable to turn on the lights as she was too small to reach the switch. When she went to find her mother at the mahjong parlor, if the game was going well she would get a dollar with which to buy herself noodles for dinner. If her mother was doing badly, she would get a smack instead and no money for food. She often went to bed hungry, or turned to her oldest brother, who had already left school to work. The pocket money he gave her was the main reason she could complete her schooling.

My mother died while I was still at school, and whole chapters of her and my grandparents’ story are missing. Back then I didn’t have much interest in my Chinese heritage – I was more concerned with being as Western as possible. Now that she is gone, and my connection with China is fading, it’s more important to me than ever to find a link with that side of my family. As hunxue’er go I look pretty Western, which has never bothered me in the past. Now that I’m living in China, studying Chinese and teaching English in Chengdu, I go out of my way to convince colleagues and friends that I really am half Chinese. I suspect many of them still don’t believe me. If you’re half Chinese, they ask me, why can’t you speak Mandarin?

My older brother and I used to talk about the confusion we feel when someone asks where we are from. As mixed-race migrants, the options for our response are greater than for most. Do they want to know where we lived for most of our childhood, or why we look “different”? Are they asking where we were born, or where we live now? Or are they really asking where our parents are from? I thought that if I returned to my ancestral home in Guangdong, the village where my grandparents were born, I could finally find somewhere I properly belong. By retracing the steps my family took all those years ago, maybe I would gain a better understanding of where I come from and who I am.

When I first came to China in 2013, finding my ancestral home seemed an impossible task. I didn’t know the name of the village, and all I knew about the location was that it was somewhere near a river, in an area where Seiyap, a regional dialect of Cantonese, was spoken – which narrows it down to the greater Taishan area, with a population of roughly four million. I didn’t even know the character for my own grandfather’s surname. At home, my grandparents were always gonggong and pohpoh. Because Singapore was under British rule when they immigrated, their surname was recorded as Kong, a phonetic spelling of the Cantonese pronunciation, and could be any of a number of characters.

A year and a half into my time in Chengdu I took a trip back to Singapore, and for the first time in 27 years I was able to communicate in the same language as my mother’s elder sister, my yima, who only speaks Chinese. She was able to add a few more pieces to the jigsaw of my family’s history. I now know my grandfather’s name was Kuang Xiuzhuo. And thanks to the sleuthing of a friend in Chengdu who used to be a policeman, I know that he came from a small village called Shuikou, next to a river to the southwest of Guangzhou.

Before I go back to England, I’ll be making the trip to Shuikou to ask if anything remains of my old family home, or if anyone there remembers Kuang Xiuzhuo, who set out with his young wife on a boat to leave China all those years ago. But between civil war, the Mao era and China’s current pace of development, I doubt anything will remain of his house. As landowners, his property would likely have been ransacked by the Red Guards, with anything of worth looted or destroyed. Even if it’s still standing, all I have is a decaying photograph of the main room to identify it by.

Nor am I so sure any more if finding that house will give me any deeper knowledge about myself and my background. In her book Factory Girls the journalist Leslie Chang describes visiting her ancestral home for the first time. “A family is not a piece of land,” she writes. “It is the people who belong to it, and it is the events that shape their lives.” In the same way, my own search for home has been more about threading together the narrative of my family’s past. The physical place itself isn’t where my Chinese heritage can be found. It exists in the stories that were passed down from my grandparents to my mother to me. It was those stories that prompted me to return to China, and to reconnect with a side of me I thought I had lost forever. This way, the story won’t end with me.

Check Out the New Anthill Book

This story was recently published in the Anthill’s China anthology While We’re Here: China Stories from a Writers’ Colony. Purchase it at The Bookworm in Chengdu, or here on Amazon in Kindle format, with a paperback version forthcoming.

12 thoughts on “Searching for Home: Roots in China”