Today is the two year anniversary of the Wenchuan Earthquake that devastated northern Sichuan, killing more than 80,000 people and leaving countless others homeless. During the first months after the earthquake in 2008, much of the world’s attention was riveted on Sichuan and the Chinese people’s response to such a massive disaster just before the Beijing Olympics. After watching the US government fumble the Katrina Hurricane clean-up and reconstruction, the world was pleasantly surprised by the outpouring of aid, manpower, love and cash from the Chinese people to help their bereaved brothers and sisters in the poverty stricken regions of northern Sichuan. The governor of Sichuan, Jian Jufeng, recently declared that re-construction in operations in Sichuan were 90% complete and that the province would finish all projects one year ahead of schedule, in September of this year. Many observers on the ground disagree with this assessment, and believe that the work is just beginning and to pull out now would risk everything that has been accomplished over the past two years. 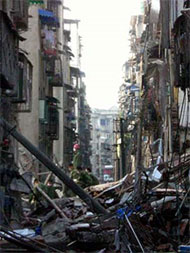 This very candid look at the reconstruction process from the China Daily mentions a lot of the problems surrounding the process — corrupt officials skimming funds, unorganized distribution of funds and material, slow or delayed construction projects and over-optimistic statements by political figures. These problems have led to a very uneven reconstruction effort that has made Wenchuan, Beichuan and Dujianguyan — darlings of the media in the first few months after the quake — into vastly improved towns, but has left places like Deyang, Shifan, Hanwang and the villages and towns that surround these cities worse off than before the quake. A lot of this uneven re-development has to do with the government’s initial methods for reconstruction.

In 2008, the central government put together an ingenious scheme to help re-build the area: they partnered counties, villages and towns affected by the disaster with affluent provinces from other parts of the nation. So companies from Guangdong, Fujian, Zhejiang, Shanghai, Beijing, Shandong and other provinces were seen building temporary housing, re-paving roads, building bridges and taking care of orphans, survivors and the elderly. Some sorely under-developed villages of barely 20,000 people in Sichuan were partnered with fabulously wealthy villages of 100,000 people and larger and the results were fantastic. Some villages in Sichuan were expanded to twice or thrice their initial size and were given control over apartment complexes, water management systems and other new contributions for their partners — high-end gifts that they had never seen before, let alone handled.

As this process was going on, the provincial and central authorities got together and established an international team of city planners and regional infrastructure specialists and drew up a series of plans to not only re-build the area, but take advantage of the tragedy to develop northern Sichuan into a self-sufficient engine of growth. These plans centered on the re-construction of Beichuan and Wenchuan, laying down a proper road network and turning Dujiangyan into a tourism hub with quick, direct connections to Chengdu and to the surrounding towns. The plan included the concept of multiple centers of development that would radiate to lesser developed areas ie Dujiangyan would benefit from Chengdu and QingCheng Mountain would benefit from Dujiangyan.

In many ways, this scheme has been very successful, but it has also contributed to the very malaise that dogged this region before the quake: pockets of gleaming affluence surrounded by fields of abject poverty.

“There are a lot of areas that are still in need of a lot of attention,” said Peter Goff, one of the founding members of Sichuan Quake Relief (SQR) and a familiar face to residents in the earthquake affected areas. “Housing, health care, education, environment concerns — (the provincial government) is telling Habitat for Humanity to stop building homes now that the mission has been accomplished but their are still thousands and thousands of people living in temporary shelters.”

SQR has devoted much of their efforts to information gathering, incubating local non-governmental organizations (NGOs) and civic society and most of all, to a tiny kindergarten in the town of Luo Shui. The group has found it difficult to fund and pursue the many projects that need to be done in the area, so focusing on one kindergarten, where they have strong local support, is the most efficient and rewarding way to help out.

Now that the local, provincial and central authorities have hung a Bush-like “Mission Accomplished” banner over the disaster areas, NGOs like SQR, Habitat for Humanity and the local ones they support and work with are being asked to cease operations because they are no longer needed. The Chinese government is not very keen on NGOs to begin with, making the application process very difficult and throwing up roadblocks any chance they get.

“Even the concept here is called GNGO (Governmental-NGO), which is the total opposite of what civil society should be,” said Goff. “I firmly believe that in any country, the state needs to be backed up by grassroots civil organizations that understand local issues and can support those people trying to solve those issues.”

In Lui Shui, SQR director David Hunt has seen local organizations spring up after the disaster, take control of their own destiny and help to solve pressing issues in the community. Major issues include access to government grants for new housing and other compensation — everything from a new washing machine to replacement livestock. In order to qualify for the grants, an individual must navigate the full court press of China’s formidable bureaucracy. In order to streamline the process and support the members of their community, local organizations such as the Luo Shui Women’s Club and Senior Citizens Club have thrown themselves behind certain applications and helped others gain access to the compensation grants.

Unfortunately, the grants cover anywhere from 20-30% of the actual cost of a house, as housing prices in the affected areas have risen dramatically in the last two years. To help cover these costs, a local must use their own savings, or apply from a loan from a private banking institution. Other issues include long-term health care for survivors — some of them breadwinners for their families — and the consolidation of villages into larger towns that forces farmers to send their children far away to go to school, or to move.

“All of these issues, and countless others, have put a huge financial burden on people who were not well off to begin with,” said Hunt. “There are grassroots organizations that are trying to help .. but they have difficulty registering as official NGOs and with that comes issues with raising required levels of funding. SQR would like to be able to support these grassroots groups by re-granting funding that we receive from donors.”

SQR’s efforts and the efforts of the grassroots groups to fill the gaps in government aid to the affected areas might be hampered by the politically-motivated declaration by Sichuan’s governor that “all rural and urban reconstruction will be finished by September 2010.”

Another issue that compounds the problems of re-construction is the unavailability of reliable information. Government ministries routinely refuse to release any information they might have concerning housing, education, health care or any other issue. The only effective way, so far, to gain any idea of what is actually happening in the affected areas is to take a pencil and paper and ask the locals. When SQR did to this — in a limited way — the result was a mob of angry Sichuanese demanding support from their government.

The key to addressing local issues is a grassroots network of organizations. But as long as politicians choose to strangle these seeds before they grow and pose for cameras beneath a Mission Accomplished banner, these local issues will continue to fester.

Over the next few weeks, I’ll take take a closer look at some of the achievements and obstacles of re-construction in Sichuan such as housing, health care, environmental concerns and the concept of NGO vs GNGO in China. Stay Tuned.