Today is the 90th anniversary of the founding of the Chinese Communist Party. Party officials and hangers-on across the country are competing for the award of Sloppiest Buttkiss during a Red Song Performance and the only thing capable of spoiling (multiplying) the fun is the Internet. Below are a few gems picked up by the vigilant Chinese netizen that I think you too will find amusing. 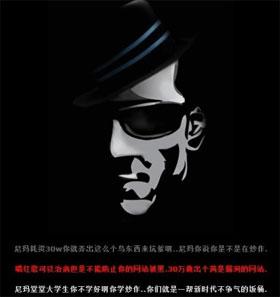 Two college students tried to cash in on the current Red Song craze by building a website (reportedly spending 300,000 RMB) and were promptly hacked and crucified by the Chinese web, which left the message at right behind. While Red Songs are playing on every radio and television station, once again tech-proficient Chinese youth demonstrate their prowess and will to subvert. This particular stunt has attracted a lot of attention from both supporters and critics and underscores the difficulty that the Party has guiding the internet toward its own corner.

The message left behind by hackers mocked the creators of the website and was retweeted on Weibo (the Chinese Twitter) thousands of times. The message, roughly translated:

You idiots, who do you think you’re fooling with a website that you claim 300,000 rmb was spent on? Red songs may be able to cure cancer but won’t stop us from hacking your website. Your website is shitty and full of bugs despite spending so much money on it. You shame China’s youth.

A Patriotic Staple Gets Reworked

A Tale of Two Cities, Chongqing and Guangzhou

An image (at right) showing the headlines from major newspapers in Chongqing and Guangzhou the day of the Party’s 90th birthday are making the rounds. The headlines on the top are from Guangzhou and all carry the following three lines:

The headlines on the bottom are from Chongqing and read:

For netizens this is a clear and easy to understand comparison of sell-out vs. righteous one and no one receives more love than he who has the courage to stand up to power.

Although this variety of patriotism is common in Chinese newspapers, the 90th is certainly a orgiastic explosion of giant, bold red headlines.

Further evidence of widespread Da Shanism, the Red Song craze as also managed to rope in foreign Buttkissers: Five well-dressed Russians singing Red Songs; an African guy in his bedroom with Mao’s Little Red Book (embedded below) and Laowai rappers Mading and Anton with their rendition of a classic Red Song, Yingshan Hong.

Don’t underestimate the power of the Party to bring about the unification of all world religions. A photo of representatives of world religions gathering in Xichang to praise the Party is being passed around the web for everyone to laugh at, which has also managed to skyrocket this Red Song, sung by nuns, to new heights.

Every day brings new laughs. We at Chengdu Living salute all those striving for the Motherland and we wish you the best of luck in the (Red) years ahead.