San Sheng Xiang (???), one of our ten favorite places to pass the time in Chengdu, is a flower growing village just outside of the Third Ring Road about 30 minutes from the center of Chengdu. The development, dubbed Flower Town by locals and foreigners, is intended to link the urban and rural areas of Chengdu and provide jobs and income for local farmers. For us, it’s a great place to spend an afternoon outside of the city, basking in the sunlight and lush surroundings away from crowded streets and honking car horns.

The project envisioned a flower manufacturing base with foreign cooperation that could sell to residents of the city of Chengdu and also export to other Chinese cities and abroad. Local farmers were encouraged to invest money in the project as well as switch traditional crops for flowers. The idea has worked inasmuch as local farmers have gained a new source of income and have managed, for the most part, to upgrade their standard of living.

The flower base also developed into a bed and breakfast phenomenon on the weekends, as local farmers opened up their doors to throngs of city-slickers wanting to get away from the urban chaos, buy some flowers for their homes and eat home-style meals. 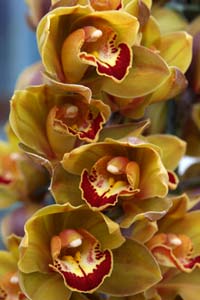 Many of the locals also rent their homes out long term to artists, musicians and foreigners who are eager to live in a cleaner, greener environment. There have been some hiccups, as real estate developers and local government officials buy and develop land owned by local farmers, but the overall goal of enriching the countryside, bringing development to the suburban areas and giving city residents a place to enjoy themselves has been reached.

We recently visited San Sheng Xiang and took some pictures on a busy weekend. If you are in need of some flowers, some homestyle cooking or just a day of walking around in a less urban setting, then hop on the number 56 (or 343) bus heading east and get off at the main gate of San Sheng Xiang. The gate on your left is a large brown structure with four A’s proudly written across the top to signify that Flower Town has been designated a Class 4-A tourist destination by the local government.

Once you reach the main gate, the best thing to do is pick a direction and walk. There are bed and breakfast’s (known as Nong Jia Le’s) off of the main street and the main flower warehouse is right across from the main gate. There are also people selling flowers up and down the main highway leading to Flower Town and in the development itself.

A cab ride out there will cost about 35 yuan – all cabbies know San Sheng Xiang, so if you want to get there fast just to take it slow, this is a great alternative.

3 thoughts on “Spend an Afternoon in “Flower Town””