In accordance with what we’ve been hearing people whisper and murmur about for months, Chengdu’s taxi’s have just gone up in price. The price has gone from 6 or 7 yuan, depending on car type, to 8 or 9 yuan. The per-kilometer rate has also gone up by a few jiao (cents) and taxi company representatives say that the price hike is actually nominal when you consider that the gas tax of one yuan is now gone. The price will become clear to you whenever you board a taxi from now on, as you can see from this photo of the sticker affixed to the rear window of each cab: 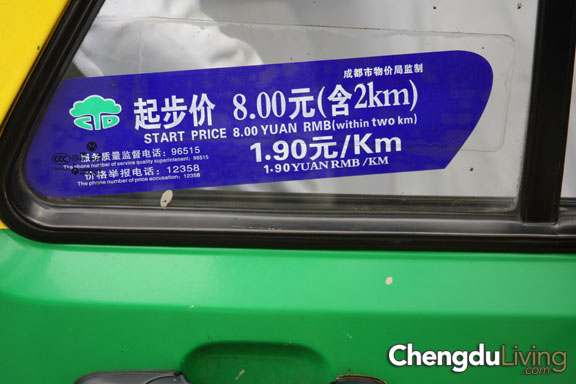 For older taxis the starting fare is now 8 yuan while newer taxis start at 9. Between 11pm-6am you’ll pay an extra one kuai at the beginning of your journey and 3 extra jiao per kilometer.

What the City Thinks

I casually spoke with a number of people about this issue; from taxi drivers to students to young professionals. Nearly everyone I had spoken to came to the same conclusion: that this was a long time coming and completely inevitable. Instead of being more expensive than other provincial capitals, Chengdu’s taxis are now right in line with Kunming, Chongqing and other cities of similar size and influence in Western China.

Still, no one wants to pay more.

You can’t deny the role of the subway though, whether you analyze this change from the position of economy or timing. Chengdu has been sorely in need of a means to more evenly distribute the transportation needs of its millions of citizens. Obviously we’re well past the days where you can comfortably or reliably flag a taxi during rush hour in Chengdu.

Hopefully this won’t put too much of a dent in your lifestyle but if it does, there are practical alternatives to relying on taxis.

Has Chengdu’s rising taxi fares got you bent out of shape or are you brushing this off? Will this change your habits at all?

Here’s a photo of a Sichuan native fake-crying upon seeing the meter fall at 8 yuan for the first time while you make up your mind: 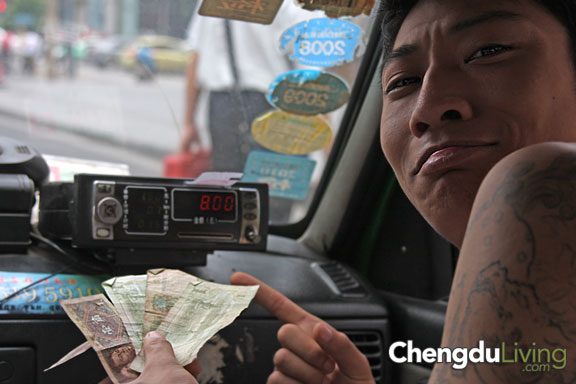