Foreward: This story was authored by Sascha on May 14th 2008, two days after the earthquake which changed our lives. Sitting in a circle of friends in a Chengdu restaurant, we listened intently while Charlie shared intimate details of his incredible experience on Qing Cheng Shan, one of the birthplaces of Taoism. Today being the third anniversary of this catastrophic natural disaster, we decided to bring this post to the forefront of Chengdu Living and to share, for the first time, photos captured during this period by a visiting friend and professional photographer. Be sure to check below the Ace of Diamonds to see those.

On the day of the earthquake in Sichuan Province, Charlie, Ramone and John met at the Shamrock Bar and Grill in Chengdu at 7am and left on motorcycles for a tour of Qing Cheng Mountain. Qing Cheng Mountain is one of the most famous Daoist sites in China, covered in temples, pagodas and teahouses. It is about an hour northwest of Chengdu, right outside of Dujiangyan, an area hit hard by the earthquake.

It was a beautiful day for a motorcycle trip. The sun was shining and there was a slight breeze. The ride up to Qing Cheng Mountain is lined with bamboo-covered hills and small brooks. Bed and breakfast inns line the road snaking up the mountain; temples and pagodas peek out from the cliffs on the way to the White Lotus Daoist Monastery perched atop the peak.

The three friends reached the top of the mountain just after noon and spent a couple hours taking pictures and touring the area. They decided to head back right around three o’clock. They paused for a moment on the way down, parking their bikes and stretching, when the earthquake hit.

“It was like an explosion. The houses started breaking apart all around us, the ground was shaking and glass was flying everywhere,” said Charlie.

They got on their bikes and tried to navigate down the rolling mountainside. Charlie was in front and was brought to a screeching halt when a landslide took out the road fifty feet in front of him. His friends stopped behind him, and they turned around and headed back up the mountain. They hadn’t gone five city blocks when they came to a house that had collapsed into the street, blocking the way up.

It was surreal. We were trapped and all of the buildings around us were crumbling into dust. The white powder covered everyone’s face, people came out into the road screaming and crying. There were a lot of broken limbs and head injuries. It looked like Ground Zero after 911.

By now, massive boulders and chunks of the old Daoist mountain were tumbling down into the small gorge next to the road. They were far away from where the friends were trapped, but they could see and hear them.

The mountain blew up right in front of us. There were tremors every few minutes. I will never forget the thunderous echo of those boulders as big as two-story buildings crashing down the mountain and into the gorge. We saw a small bridge that crossed the gorge and led to a small hotel with an open field in front of it. We reluctantly crossed it and made our way to the wide grassy area in front of the hotel. 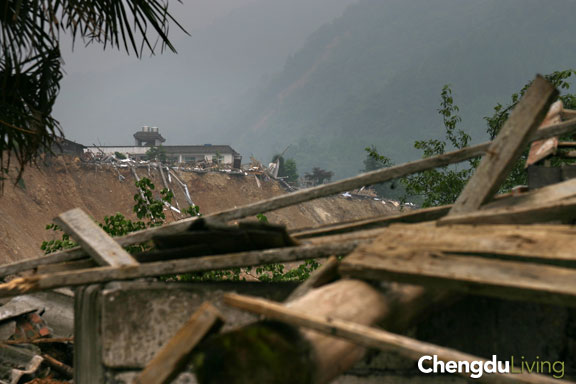 The earthquake subsided after five or so large tremors and the friends were safe on the far side of the river in the open field. People wandered around in a daze, silent and staring up at the mountain.

We used wreckage, plastic sheets and bamboo poles to build a small camp on the field and people started wandering over. In every building people had died. There were infants and old people; people trapped in the rubble. Everyone formed groups and tried to enter the buildings to rescue their friends and family, but it was still too dangerous. The tremors still shook the area, boulders fell from the mountain and buildings were still crumbling.

Charlie took a headcount of all the people, 105, and collected supplies. They found 300kg of rice, propane gas and some umbrellas. The camp was in a precarious position. The tremors kept coming, the mountain was falling apart and the sun was going down. As night fell, Ramone, Charlie and John huddled up with the locals and tried to get some sleep.

It started raining hard when night fell and it was impossible to stay dry. We could hear the boulders falling and felt every tremor. I learned to distinguish the boulders by their sound: the little ones sounded like rushing water and the big ones like thunder and explosions. The tremors always began small and rapid, then grew violent before subsiding again.

The long night lying on the wet ground, listening to the mountain fall apart around them and sensing every tremor, was as terrifying as the initial explosive earthquake. The water pooled around their bodies and they barely slept, waiting for the tremor that would kill them all. 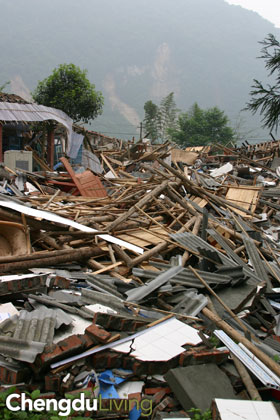 They planned to leave at sunrise, but as dawn fell across the small gorge they were trapped in by fallen boulders on all sides. The whole group stood and simply waited for something to happen. Then a tremor hit and a giant piece of the mountain opposite came crashing into the gorge below. Everybody panicked and began yelling to each other to make a run for it. The group rushed up the near side of the mountain, pulling themselves up through the mud and brush. The very old and the very young raced up and away from the mountain shattering across the gorge.

When they reached the top, they found a path that led to a teahouse with chairs and a wooden shelter. The group gathered under the shelter and started a fire, cooking up rice porridge for breakfast.

All of a sudden, a leader emerged. A man stood up on one of the benches and started yelling at the crowd. I couldn’t understand much, because the dialect is very thick. But from what I could understand, he said: I know the way, I can lead you out, who is with me? The whole crowd yelled “Hao!” (Yes!) and we set out.

The man led the group down a clear path, then veered back down toward the river. The mountainside was muddy and denuded of trees, so it was very slow going. They were closer to the area where the boulders were falling and the raging river was right below them. It was a long, tense hour before they managed to get all of the people across the muddy mountain and down to the road. The road was almost completely destroyed. Pieces had fallen into the river, boulders and landslides blocked the path. The group picked up pace and headed down the mountain.

He led us through the damaged road, past total devastation. The small town on the shoulder of the mountain was completely destroyed. A restaurant I had eaten lunch at thirty minutes before the quake hit was gone; complete wreckage. Temples were destroyed, pagodas knocked over. It was like an abandoned war-zone with buildings half-exposed, but almost no other people. The whole town was flipped upside down.

They followed the road down, often reaching parts virtually wiped out, leaving only one small path for the group to follow. When the group reached the ticketing office of the Qing Cheng Mountain Tourism Area, they joined about 500 people waiting in line. Local and military police organized everybody into two lines and guided them down the mountain. The roads and all paths were demolished. Everyone had to hang onto branches and bamboo and climb down a precarious, muddy path. Ramone and Charlie carried an old woman with head trauma along a path that hugged the cliff. She was in high-heels and ankle deep in mud. It was still raining and the tremors kept up throughout the day.

The road resumed farther down the path. Police and motorcycles started appearing on the road and the survivors stumbled past another destroyed village. When they reached the foot of the mountain, hundreds of people were milling about with their belongings in plastic bags, looking for transportation out of Qing Cheng Mountain. This is where the three friends split from the group.

We found a car, but he did not have enough gas to get back to Chengdu and nobody was selling any gas, so we decided to go to Dujiangyan. We had no clue about the earthquake- where it was centered, how the rest of Sichuan had been affect or anything. We were shocked when we reached Dujiangyan. The city was in total chaos. Hundreds of thousands of people crowded the streets and military units were marching in formation carrying shovels; they were on the scene very quickly. Military and police vehicles flashed their lights and every open space in the city was covered in a tent. The buildings were not all totally demolished, but every building had sustained extensive damage. The bus station was closed and there were people everywhere with bags waiting to leave.

Clutching The Ace of Diamonds

They found a car back to Chengdu and listened to the radio on the hour-long drive back, learning of the extent of the damage done by the earthquake. A few hours later, Charlie sits in the Sultan Restaurant in south Chengdu and shakes his head at the experience. He pulls out an ace of diamonds and shows it to me.

This helped me get through, man. It was the only happiness I felt during that night. It was cold and wet and terrifying, but when I found that pack of cards I just felt a surge of happiness. I told everybody: Hey look, a deck of cards, we can really use this.

He shakes his head and laughs.

A Chinese-language news broadcast is embedded below. It’s live footage of the earthquake filmed by a member of the group on Qing Cheng Shan. Titled “Most terrifying live footage of Sichuan earthquake by far”, the video already has been viewed by hundreds of thousands around the world.

More Photos Taken After the Earthquake

The photographs below were captured after the earthquake by visiting photographer and friend, Julia Zimmerman. We returned to the place where Charlie was during the earthquake along with Ramone and retraced their steps, capturing photos of the locations. We’ve also included some photos taken in a nearby town and outside of Chengdu. 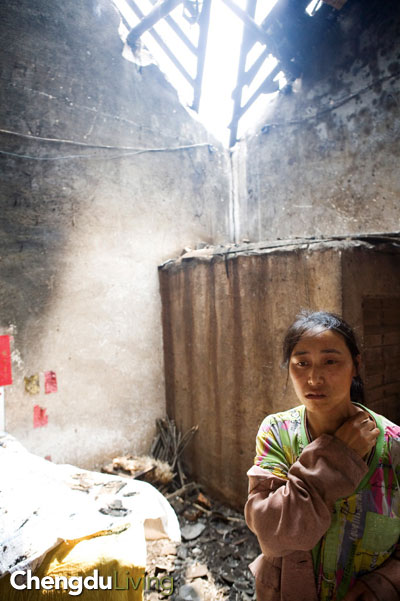 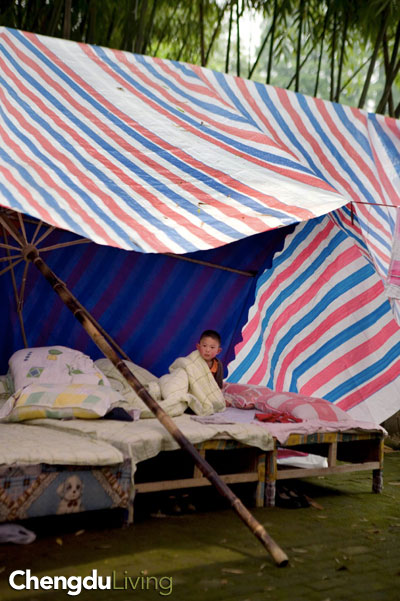 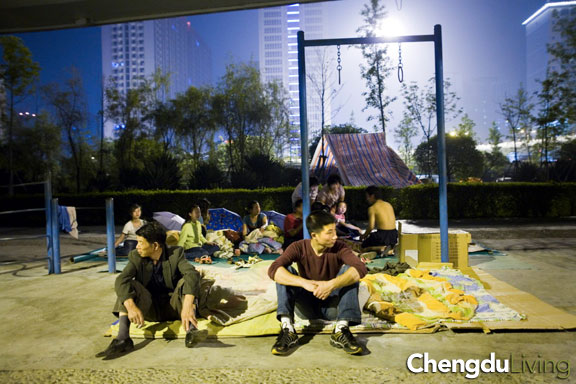 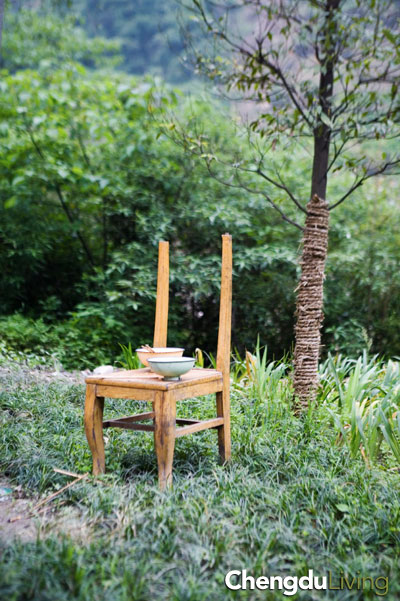 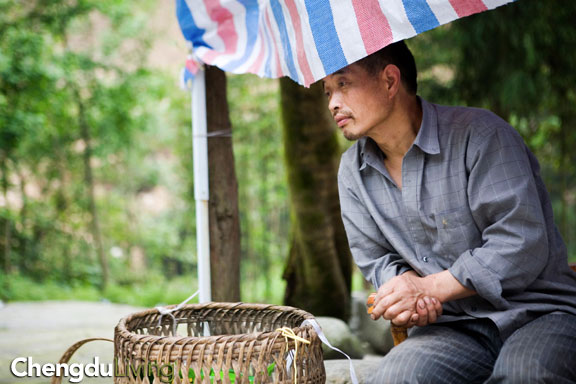 17 thoughts on “The Ace of Diamonds: Surviving the 2008 Earthquake”