At 8:05 a.m., a smartly dressed university student wearing a black pantsuit strolls across the stage, nervously adjusts her microphone and starts to speak. On the other side of the nation Xi Jinping has just been sworn in as head of the Communist Party at the 18th National Congress of the Communist Party of China. Pundits will analyze his brief speech looking for clues about the country’s future direction. For my money, anyone wanting to find out where China is headed would be better off doing their listening here, at the Sichuan regional finals of China’s university-wide English public speaking contest (英语演讲大赛).

If Xi was tight-lipped, these forty-three provincial level Chinese college students promise to be extremely generous with their language. After a two-minute speech on the contest’s theme, “what we cannot afford to lose,” they will offer an impromptu discourse on a randomly chosen topic and then respond to questions.  In a country where youth have shaped history from the Cultural Revolution to Tiananmen Square, the forum presents a unique opportunity to gain insight into the mind of China’s up-and-coming generation.

What We Can’t Afford to Lose

To those unfamiliar with the Chinese obsession with learning English, the idea of a university wide contest in offering speeches in a second language might seem bizarre. Isn’t it hard enough to speak Chinese? In fact, English is part of the Chinese educational curriculum starting in elementary school, and a section of the national college entrance examination is devoted to an evaluation of English skills.

With more Chinese than ever applying to American universities, English ability is becoming crucial for the Chinese version of success. The result is that while China may be responsible for aiding and abetting America in running up its national debt, it is also doing its part in helping our country reduce its unemployment rate by hiring an army of foreigners with seemingly few other qualifications than being born in an English speaking country. At least that explains what I’m doing here as one of the two “foreign experts” on the panel of eight tasked with scoring the contest and determining the three students who will advance to the finals in Beijing.

But back to the show. 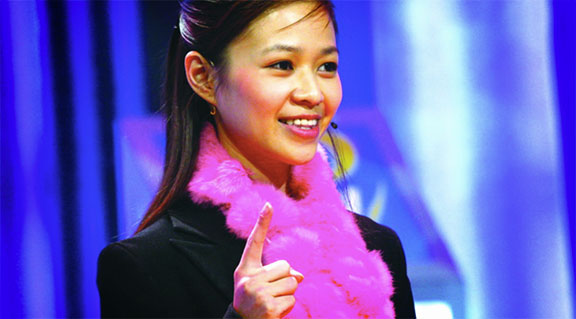 It was a sentiment Xi shared in his opening speech:

“Our nation is a great nation. In our 5,000 years of civilization, the Chinese people have made indispensable contributions to human development.”

But if traditional Chinese culture has endured this long, why express a concern for its preservation?  To draw again on the parallel with Christianity in America, no one except the paranoids at Fox News seriously believes that Christianity is threatened. By contrast, the Chinese government is certainly providing more than a few clues that it feels like traditional values are under attack. The move by the government a few years ago to shorten the holiday associated with Communism (May Day) and reinsert two more ancient holidays (Tomb Sweeping Day and mid-Autumn festival) was generally perceived as a sign of the desire to emphasize tradition.

As part of this process, Confucius himself has come back into vogue after an era of disrepute under Mao. Not only has the government established a series of institutes that bear his name around the world meant to teach Chinese language and educate about Chinese culture; it has as well backed a movie purporting to show the life of Confucius and even went so far as to recently install a 31-foot statue of the ancient sage just across the road from Mao’s portrait. Granted, the statue mysteriously disappeared a short time later, but there is no evidence the interest in Confucius or tradition is a passing fad.

English and the China Dream

The reason for this concern about traditional values in China was a big part both of Xi Jinping’s speech and of the contest.  In his speech, Xi had said that

“Our Party is confronted with many severe challenges. There are many pressing problems within the Party that needs to be resolved urgently, especially the graft and corruption cases that occurred to some of the Party members and cadres.”

Indeed, with China recently falling from 80 to 75 on Transparency International’s corruption perception index, tying it with such luminaries as Serbia and Trinidad and Tobago, not even the Party is debating whether corruption is a problem in China.

Although Xi failed to name any names in his speech, the students were not so reluctant to indict particular entities within the culture. No less than a half dozen of the speeches either directly or indirectly mentioned the slew of food scandal problems that have rocked China in recent years. The most notorious of these involved melamine, an industrial chemical used in making plastics that was added to infant formula in order to artificially drive up the protein content. By the time this was discovered, at least six infants died and as many as 300,000 were sickened.

More recently the practice of restaurants reclaiming and reusing oil that has already been dumped as waste—otherwise known as the sewer oil scandal—has been in the news. Add to this the whole exploding watermelon phenomenon, the aluminum dumplings, and the glow-in-the-dark pork and we can begin to talk about a trend. Indeed, a new food scandal seems to appear almost daily in China. Earlier this year a website that catalogued Chinese food scandals, throwitoutthewindow.com, crashed because of its popularity.

Dressed in jeans, a white shirt and black tie one of the few male contestants starts his speech by asking the audience “Did you drink a glass of milk this morning?” After most of the audience raises their hands he follows up. “How many of you are confident about that milk?” No hands shoot up. Corruption in the food industry is only one part of the multi-colored tapestry that constitutes traditional Chinese business practices. Last year it was Guo Meimei, a young woman who posted pictures of her very elaborate lifestyle financed, she declared, by an official in the Red Cross of China. Indeed, not long after Xi’s speech, an official was arrested when a five-year-old video of him having sex with a teenage girl in exchange for approval of a construction contract surfaced online.

Why Does Love Decrease as Economy Increases?

In the aftermath of his speech, Xi seems poised to make the fight against corruption a central focus of his tenure, emphasizing the topic in additional public addresses as well as offering symbolic gestures and making some high profile arrests. The message is clear that the law against corruption will be more strictly enforced and those guilty will pay the price. The students, however, suggest a different strategy. Unlike Xi, the students explicitly tie the corruption to a larger breakdown in traditional values in the society, for in conjunction with the melamine scandal several of the speeches discuss another recent, notorious incident.

Last spring, a two-year old girl, Yueyue, was run over twice by cars and lay dying in the street while dozens of pedestrians, bikes and automobiles drove by. At least for a few days a country paused and asked of itself the same question a small girl with a plaid skirt and wire-rimmed glasses posed to the audience today: “Why does a people’s love gradually decrease while their social and economic level increases?”

In speeches declaring that what the country can’t afford to lose is variously dubbed trust, responsibility or love, these college students announce that the problem is not a legal but a moral one. Of course, the suggestion that stricter enforcement of the law is a hopeless way to impose moral order is stated in the Tao Te Ching: “The more rules and regulations,” warns Lao Tzu, “the more thieves and robbers.” Indeed, this ancient truth received recent verification, for despite the death sentence meted out to those in charge, more tainted milk has since found its way into the marketplace.

The reality is that in going after a few cases of corruption Xi is behaving like the physician whose strategy for treating cancer consists solely in removing the lump from the breast. If he listens to these students, he will understand that a much more sweeping reform is necessary to eradicate such morally egregious behavior.

Given the history of widespread social reforms in China, however, I am actually a bit relieved he is on the other side of the country.

20 thoughts on “The China Dream: In English”