Having now lived in China for 5 years, friends back home in the US often ask me about the difference between the two countries. Chinese friends ask me this also. I hate to make sweeping generalizations that over-simplify the diversity and variation within each country, but people want you to encapsulate the experience – so I make them anyway.

#1: Traffic Laws Are Not Laws in China

Living in China for a long time de-sensitizes you to the differences in traffic practices that you noticed when you first arrived.

Sometimes it takes the frightened screaming of your visiting aunt to remind you that Americans only sparingly venture into the oncoming lane of traffic, and when doing so, return to their lane immediately after passing. In China drivers cross the center lane casually, nonchalantly, seemingly without imperative to yield when approached by an oncoming car. Sometimes passing cars just brake, move slightly to their right, and challenge the driver with the right of way to squeeze around them.

I remember being in a taxi on a congested lane, during one such game of low-speed chicken. As we slowed to a stop in the wrong lane of traffic, I remember my surprise that the other driver, who squeezed around to our left, didn’t even honk as he passed us. I was amazed that our brazen behavior was not even deemed a honk-worthy violation. I imagine the logic behind this aggressive approach to urban driving as akin to the doctrine of ‘mutually assured destruction’ that was practiced by the US and the Soviet Union during the cold war. If both parties appreciate the fact that their lives are in the hands of the other, they have a clear incentive to work it out, to yield.

I suspect that the chance that driving in the wrong lane of traffic will result in a head-on collision is even higher in the US than China, because oncoming drivers might choose not to yield on principle.

#2: One Menu Per Table in China

This is actually this part of a larger difference between Chinese and US dining culture, namely, in China the guest and host roles are much more significant and traditionally engrained.

In the US, each person gets their own menu, because each person orders for him or herself. If you go out to eat in China, often (and traditionally) one person orders for the whole table, because that person, the host, will be picking up the check. Treating someone to a meal is a form of social currency in China, acknowledged and redeemable within the moral economy of interpersonal relationships.

Another difference about ordering food in China that catches many Westerners off-guard is the timing. In the US, a waiter usually gives you a few minutes alone with the menu before you order, but in China waiters usually expect you to start ordering as soon as you receive the menu. When I was a newly arrived foreigner in China, on unsure footing with the language, it was always anxiety inducing when a waiter would hand me a long, all-Chinese menu and then stand there expectantly, with pen poised, waiting to take my order. I felt rude making the waiter stand for a long time while I contemplated my order, so after a few moments of fruitlessly scanning the menu, I would often just stab wildly at any dish featuring a recognizable character for meat, hoping for the best. This strategy produced mixed results.

I never questioned the supremacy of white meat before I started living outside of the US. I always assumed that the most desirable (and most highly valued) part of the chicken – the breast – was a matter on which there was international consensus. Not so.

Enhancing chicken breast size has been an objective of the American poultry industry for years, but in China (and many other countries) consumers prefer dark meat, which is said to be more flavorful. If dark meat is more flavorful, why are chicken breasts so popular in the US? Maybe for Americans, the convenience of a single boneless piece of meat has outweighed any flavor considerations, as aesthetics have overtaken flavor among our preferences for tomatoes. Having grown up with the assumption that breast meat was most favorable, it befuddled me to discover upon arrival in Chengdu that kung pao chicken, the delicious standard-bearer of Sichuan cuisine, generously heaped with cubes of chicken breast could somehow be less expensive than pepper chicken (???,) which looked like nothing but a pile of hot peppers and greasy jagged bones.

American tastes may be shifting however. Recently a preference for dark meat has started to appear in the American market, with demand for thighs and legs growing.

Many children in China definitely do use diapers, but the fraction of people exploring other options – notably split trousers – feels significant. I can definitely see the appeal of crotchless pants for young children. Split trousers combine the comfort of having your genitals exposed to open air with the quintessentially Chinese lack of personal space exemplified by defecating in public. 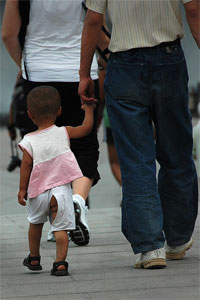 From a parent’s perspective, they are also tantalizingly convenient – you can avoid the unpleasant task of changing diapers and save money in the process. In the US, privacy and individual rights are sacrosanct. But in urban China, where body boundaries and notions of personal space have been pragmatically reshaped by the constraints of density, and the inescapable proximity of other humans, it’s understandable that people have grown accustomed to watching children relieve themselves on the sidewalk.

When I see children pooping and peeing publicly, I look at the faces of their parents, and rarely detect even a hint of embarrassment. But expat life can make things that were once shocking become passé. After a while, you see a parent dangling an infant over a trashcan on a public street and you don’t even look twice. You think “She’s holding it over newspaper… smart move”. Trying to land it in a plastic bag is a messy affair.

To my Western eyes, the practice is unsightly, but whether or not it is any more unsanitary for a child than a pet to defecate publicly (assuming proper disposal,) I am not sure. In a country with so many people, being squeamish may just not be practical.

5. In China, It Is Acceptable to Tell Someone They’ve Gained Weight

It goes without saying that commenting about weight gain in the US is uncouth (to say the least,) but in China, people view such remarks very differently. Not only is it not rude to talk about a persons weight in China, among close friends it feels almost expected.

I sense that my Chinese friends go out of their way to comment on my weight. They say confidently, ‘you’ve definitely lost weight,’ or ‘you’ve put on a few pounds,’ when I’m sure that I am pretty much the same size I was when I last saw them. It seems to be a polite way to inquire about someone’s health.

Your girth is a baseline indicator of your general health, and when you haven’t seen someone in a while, it’s nice to let them know that you are taking note of their physical well-being. It’s not just a comment on someone’s appearance, people use weight as a segue to inquire about other subject, saying things like, ‘oh, you’ve lost weight, you must be working too hard at work,’ or ‘your wife must be treating you pretty well, you’ve gotten fatter.’

You know what you can’t do though? Call a Chinese girl short. A couple years ago I made a remark about the height of one of my girlfriend’s friends, in the presence of the vertically challenged lady, and I have been hearing about it ever since. I didn’t realize at the time how insulting the remark would be perceived. But in China, where slender figures are nearly ubiquitous, height is the trait that comes at a premium.

Disclaimer: These are sweeping generalizations, and numerous counter-examples undoubtedly exist.

What am I missing? Let me know in the comments below what you’ve noticed about how China differs from the United States, or your home country.

103 thoughts on “Two Worlds: 5 Striking Differences Between the US & China”