Tell me if this sounds familiar: you’re on the street in Chengdu trying to flag a taxi, but you aren’t having any luck. When you finally find one, you swing the door open and duck in the backseat. The first things you notice are the dilapidated interior and the cigarette dangling from the driver’s lip. Next you notice that the window won’t go down as you wave smoke away and struggle to understand the driver’s Sichuanese accent.

I have experienced this hundreds of times. But not once in recent months, because I’ve been using a much better alternative in Chengdu called Uber. And as long as Uber is available in Chengdu, I don’t think I will be taking a single taxi again. Not only is Uber much more comfortable than a taxi, but it’s actually much cheaper too.

Uber is an app-based transportation network that’s been in China since 2014. Using your iPhone or Android smartphone, you can call a car to take you anywhere you want.

Uber came to Chengdu in October of last year. Since then Chengdu has become the 3rd largest city in China for Uber, after Beijing and Shanghai, with over 10,000 drivers. Each day, Uber hosts two training sessions in Chengdu which qualify over two hundred new drivers to hit the streets. Business is booming.

How to Set Up Your Uber Account in China

Once you have the app installed, you will need to register an account. You will register with your email address and phone number since drivers in China will call to confirm your location for each ride. When you register, enter in my promo code (uberjustcharlie) and get your first ride free.

When it comes to payment, it gets a little more tricky. I tried to create an Uber account with two Chinese bank cards, both Merchants Bank and Bank of China. Neither worked. I ended up using an American credit card (a Paypal MasterCard) which works great. AliPay, the Chinese Paypal, also works if you have that. When you input your payment information, Uber will charge a small amount to the card for verification.

Once setup is complete, open the app and you will see your position on a map. Call for a car and usually within one minute a driver will be on his way to pick you up. You will receive a phone call from the driver to communicate your location, even though already specified it on the map. I have had many conversations where the driver calls and I tell him “look at the map”.

Before you’re picked up by an Uber driver, you can toggle between two types of cars:

The cheaper of the two options, People’s Uber is their standard service in China. This is what I use almost every day. All the cars I’ve been in at this range are less than five years old, which means they are more comfortable than 90% of taxis.

The fee structure for People’s Uber looks this:

The cost of People’s Uber is much cheaper than taking a taxi. From my home to my office in the Tianfu Software Park, taxi fare is around 27 rmb. With People’s Uber, it’s 15 rmb. Commuting to my office every day, this saves me 180 rmb a month or 2,160 rmb a year.

Common cars in this range are:

You won’t believe how nice some of the cars in this range are. My highlights include a Lexus CT200, a Mitsubishi Lancer EVO, and a BMW 325i.

This is Uber’s higher-tier service and it features luxury cars. Sometimes these cars will offer passengers perks like a bottle of water or a wi-fi hotspot inside the car. 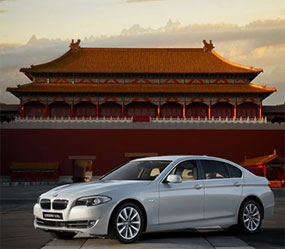 Cars in this range:

The fee structure for Uber Black:

Except for picking up guests from the airport, I never use Uber Black. There are fewer Uber Black cars in the city so pickup takes longer and it costs much more. Not worth it, in my experience.

About once or twice a year I will encounter an especially friendly taxi driver and have a great conversation. I encounter these type of people about 20% of the time that I take a ride with Uber and it has changed my impression of Uber as a service: I see it as a network of friendly people working for themselves more than a company with central leadership.

I have already suggested to friends that they should check out Uber instead of taking a taxi. When one friend, Dan, took Uber for his first time in Chengdu, he immediately connected with the driver and made a new friend.

Drivers are happy to do what they’re doing and they like Uber because it treats them well. Instead of serving a monopolistic taxi company, they are working for themselves and earning more. This is a service that I am happy to support. 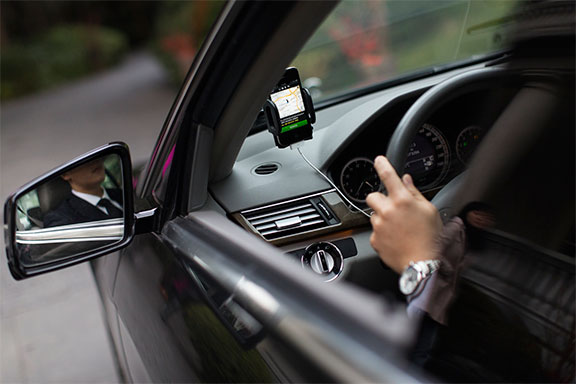 The Longetivity of Uber

I’ve spoken to many drivers to learn what they think about Uber. The first thing you will hear is that they love the service. “It’s much better than a taxi”, they all say, which I agree with. The next thing you hear is fear and concern about the future of the service in China. “I worry about how long it can survive here”, one driver told me. I asked him why and he said that the central government is likely to crack down on Uber when it grows large enough to threaten taxis. Taxi drivers have protested both Uber’s presence as well as the government’s heavy-handed cab monopoly. The Chinese government, meanwhile, has already taken steps to ban Uber, and Seoul has banned Uber services as well.

It’s a good idea to take advantage of this while it lasts, because no one knows when this will be gone.

You have nothing to lose by registering an account and giving Uber a shot. Use my referral code (uberjustcharlie) and the first ride is free.

May 6th, 5pm edit: Evidently Uber’s head office in Chengdu was raided this afternoon. Photos from Chinese media are below: 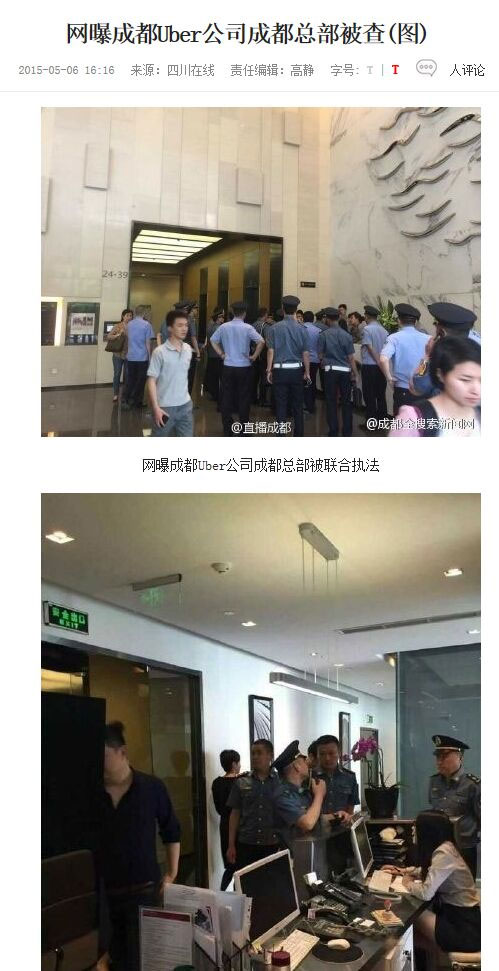 May 6th, 6:30pm edit: I received the two images below from a friend whose office is across the street from Uber’s Chengdu headquarters. You can see police lined up on the street outside. I also have seen what is purportedly a text message sent to all Uber drivers in Chengdu, that is below in Chinese and in English:

[Uber] Dear partner, we will continue to actively communicate and participate with local authorities, as of now Uber operation in Chengdu is normal. The best way that you can support Uber is by serving residents of Chengdu and to remain calm. Thank you for your support and understanding! Uber Chengdu will continue working hard to provide more support and better service to you! 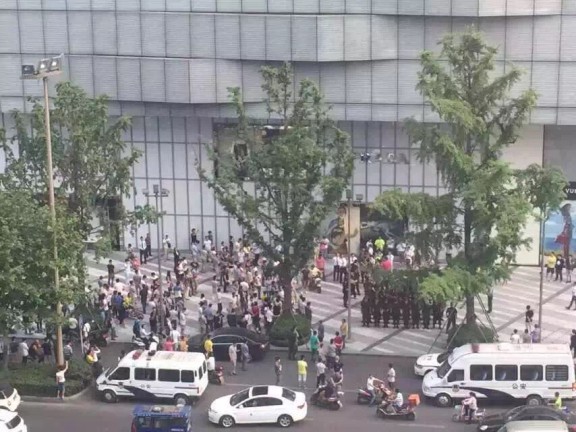