Editor’s note: “Unsavory Elements: True Stories of Foreigners Loose in China” is a collection of  tales from some of the best China writers in the game. The editors will hold a panel discussion at The Bookworm on Sunday, June 2nd at 7pm.

My first thoughts when I heard that Tom Carter et al were producing a collection of “laowai in China” stories were I can’t take anymore laowai in China stories. I have enough of my own, I read them every damn day, and most of our stories are just re-hashed observations that have changed little in a century.

The streets haven’t changed, only the names. That, as we can all admit, is a depressing perspective and it’s a good thing I took Unsavory Elements and read all 300 pages, because it changed my perspective on my perspective. It took me one night. I got caught up in great stories and forgot about how my boys wake me up at 7am with small feet to my head. 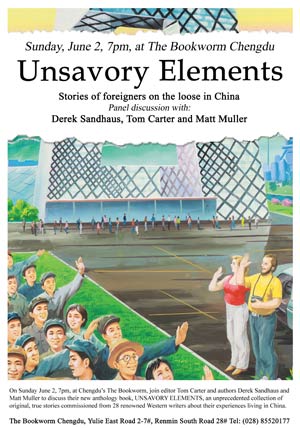 I’m saying I got caught up. There are a couple stories that will have everyone nodding along and flipping through a paragraph to get to the end and there is one creepy story – and that’s amazing, cause you’d think a collection of China tales by predominately foreign males would have a lot more lust – but no, not much softcore in this collection because the writers are all pros.

Watts on Jozef, a tale of enchantment that hit home with me, as an observer. Jozef Margraf was a German polymath who built a beautiful home in Xishuangbanna and spent the last years of his life raising amazing children and finding new ways to save the tropical forests of China’s southern borders. Watts spends a night at his house just days after Margraf’s death, and leaves a changed man.

A 16 year old American girl in Beijing, finding a new mom and a new family, also brought a tear to me eye. Stories like this one, by Kaitlin Solimine, remind me of the pure light of those first days in China. When everything was fresh and beautiful and shatteringly real.

And the story of an idea that became a bust. Literally. Mark Kitto’s proves to be a witty bastard with a sharp eye for human behavior in this essay about his head being taken.

All great stories with tight writing.

But I think the best thing about this collection is the embracing nature of the stories told. You would expect the audience for this type of book to be … folks like the authors themselves and the people who know them. Not the case. Last week two Midwestern women showed up in Chengdu for 10 days and asked me in all seriousness when China would take over the US. I said never. They looked at me with pity in their eyes and basically tossed away any notion they may have had that I know China better than they do.

Point being: lots of people with what I would say “zero clue about China” are interested in China and they will pick up a collection like Unsavory Elements just to live vicariously. And the good thing is, every one of these stories is accessible to the clueless. Sure, long time China Watchers will read between a few lines and see themselves there, and nod accordingly, but every single one of these tales contains enough humanity to do exactly what it is all of us who live in, work with, and write about this place want to do:

But don’t take my word for it.

Show up at The Bookworm in Chengdu on Sunday, June 2nd, at 7pm and listen to Tom Carter, Derek Sandhaus and Matt Muller talk about their unsavory selves and the elements thereof in the collection they have edited. And then buy the book and learn something.

14 thoughts on “Unsavory Elements in Chengdu”