Even though it was only announced a few days ago, Apple’s iPad already has me thinking about how app developers will use the large, high resolution display to make learning Chinese easier than ever before.

Over the last few years we’ve seen a huge jump in the accessibility of every kind of study aid you can imagine. From dictionaries, to flash cards, to edutainment, literature, and guides to idioms, there are hundreds of applications available on the iPhone for learning Chinese that are fun and easy to use. Flipping through flashcards or tracing characters with your fingertip is a more engaging and interactive learning experience than sitting through a dull class or flipping through textbooks. Which means you’re more likely to stick with it and see results.

Some of the standout features that make the iPad great for learning Chinese: 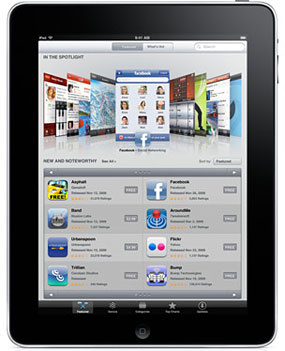 If you search for “Chinese dictionary” in the App Store, more than 25 variations emerge. They mostly offer similar features, but the abundance of dictionaries demonstrates the size of the Chinese learning market: it’s huge and growing quickly. Application developers will be updating their offerings and creating new ones especially for this device, which means that as with the iPhone, the sky is the limit.

Any study aid that you can probably think of has either already been made or is in development. A year from now, this thing will most likely have produced new and innovative applications that we can’t even imagine now. Utilizing these  more efficient tools and techniques will enable you to spend less time acquiring your language skills and more time actually using them.

When it’s released in a month, all existing applications for learning Chinese (read about our favorites) will work from day one. Apps that aren’t updated to support the iPad’s higher resolution will display either in their native format, which will look tiny on the iPad, or in a blown-up full screen version. This is important whether you’ve paid $149.99 for the Pleco Complete Bundle or if you’re just comfortable with the Qingwen dictionary app and don’t want to switch to another.

If you’ve been studying with paper and textbooks for years, you know that these are time-tested methods which work. What the iPad and it’s competition offer, however, is a more streamlined and efficient method for language acquisition. Using modern techniques like intelligent flash cards will only drill you on the words and phrases that you have trouble with, cutting down your study time significantly. If you’ve found yourself getting bored and giving up after writing 200 characters a day (like one of my friends recently has), utilizing methods like these can make all the difference.

They’re more powerful and versatile but sometimes they aren’t as effective because they’re slow, cumbersome, and mired with distractions. It takes a lot of typing, clicking, and waiting to get a definition online in your browser. If you want to investigate a character, word, or phrase, you might get distracted by incoming e-mail or IM’s and lose your direction. If your home computer is off and you have to turn it on, you might not even bother after waiting so long. If you want to review flash cards for just a few minutes, you might not bother if you can’t do it immediately and at your whim.

Let’s say you hear an unfamiliar word in conversation and want to find the definition right away. The faster you can execute this action, the more likely and often you are to actually use it.

E-Dictionaries and the iPhone & iPod Touch

E-Dictionaries are costly and unwieldy at the same time. They have tiny displays, cramped keyboards, and you can’t write characters. The graphics generally resemble Windows 3.1, they have a limited number of functions, and they still cost up to  $400.

The iPhone and iPod Touch, however, are great tools for learning Mandarin. They will run the bulk of Chinese learning apps in the app store and feature nearly all the same technology as the iPad. What they lack though, is the larger resolution display and faster speed due to the new A4 processor designed by Apple. With these allowances, developers can improve the function and features of basic tasks that we use to study everyday.

The iPad comes out in March and starts at $500.

What do you think of the iPad? Leave a comment!

50 thoughts on “Using the iPad to Study Chinese”