Anyone who’s been living in China for a while has probably heard of what’s known as the Gao Kao (?? – literally, “high exam”). It’s the rigorous week-long exam that Chinese high school students take before embarking on the first steps of adulthood. I was lucky enough to meet a recent high school graduate named Maomao who shared some information and photos about what taking the test is like.

What is the Gaokao? 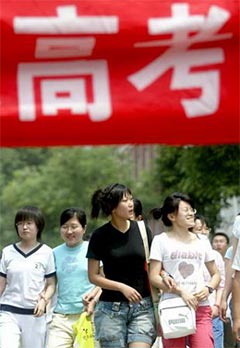 It’s similar to the SAT in in the U.S. in that it’s a higher entrance examination, but the sheer numbers of China make this a far more daunting test that determines much of your future. So I wasn’t hugely shocked when I recently heard that several students had met an untimely fate due to the tremendous pressure of the Gao Kao. In spite of knowing so little about what the Gao Kao is actually like, I found a great opportunity to learn more by way of making a new friend in a recent high school graduate named Maomao.

Sascha and I met with Maomao at a tea house in Chengdu and he told us about his journey climbing the academic ladder in China. This is what he sent us afterwards:

Preparing for the Gaokao

After three years of a hard and busy life in Chinese high school, the Gaokao (??) is coming. The Gaokao is the final exam of high school and is the sole exam that determines which university or college you’ll be allowed entrance to. This makes the Gaokao the jumping off point of life in China.

In the day before the Gaokao, most of us stopped studying and begain to say our goodbyes to high school. Students took cameras to school to capture memories of their peers, teachers and the school environment.

Ordinarily, when final exams come, we won’t waste even a precious moment that could be used to to review test material. Sleeping hours aren’t off limits, either. But the Gaokao is different. Like the Olympic athletes aiming to capture a gold medal, students are instructed to relax our minds and bodies in the week before the fateful exam. All of our courses are halted: teachers come to the classroom but don’t teach. At this point, their job is to answer our questions and help us relax.

This post is part of a series on making the transition from high school student to college and adulthood in China. Maomao is a recent high school graduate and new contributor to Chengdu Living who’ll be attending the University of Science & Technology, a prestigous college in Chengdu, this fall. We’re looking forward to getting more of an inside look into what life is like for a young adult in China.

Is there anything you want to know about the Gaokao?

33 thoughts on “What Preparing for the Gaokao is Like”