Shortly after I first arrived in China, I started hearing about QQ a lot. Phone numbers seemed almost irrelevant except for very close friends when virtually everyone in China had registered QQ accounts to chat with friends online. Like Facebook and Myspace before it, QQ demonstrated that ubiquity is the most powerful asset of any social network. And QQ had the entire market.

Currently we’re in the midst of another massive QQ-style internet takeover. This time it’s Sina’s Weibo micro-blogging service (think Twitter) that’s swallowing up millions of users. After hearing about it for weeks on end I registered an account and downloaded the Weibo app on my iPhone. After several months of exploring the system, interacting with old friends and making new ones, I barely even bother to get on QQ anymore since virtually everyone has already made the switch.

Here’s how and why you should get on Sina Weibo to begin interacting with friends in your neighborhood and across China.

How Does Weibo Work?

From the beginning (almost two years ago) Weibo has been described by nearly everyone as the Chinese Twitter clone. This does a serviceable job of describing how Weibo works: at it’s heart it’s a chronological timeline of less-than-140 character posts authored by people you follow. Simple enough.

Since its inception though, Weibo has added several features distinguishing itself from Twitter and becoming something of a Facebook-Twitter mashup. Since both of these juggernaut social networks are inaccessible to users in this country, this unison makes a lot of sense since Facebook and Twitter have already gone through the trouble of spending years figuring out how social networks like this should work.

Why Weibo is Worth Your Time: Making Connections

Being connected to your friends is a wonderful thing. Facebook or Twitter on their own don’t hold much appeal to me and I don’t think my case is very extraordinary. It’s the connections that are valuable. Weibo offers the exact same thing: a connection to all of your contacts in China.

If your friends in China are like mine (mostly people in their 20’s and 30’s), there’s a good chance that they’re all on Weibo and cruise their own timelines from their office computer or smart phone. And once you’re connected to them, you’ll stumble upon others with similar interests.

For instance, one of the first people that I followed on Weibo was Gas, Chengdu graffiti artist and friend. A few weeks ago he traveled to Changsha to participate in the biggest annual graffiti event in China. During his extended weekend in Changsha he posted dozens of photos of artwork all around the city and through those posts I got connected with artists I hadn’t even heard of before. The same thing has happened in many of the other social circles that I’m in be it technology, photography, or music.

In short, Weibo is a great way to connect with people who have similar interests in China. Or just connect to Tom Cruise or Bill Gates who have recently joined Weibo and accrued hundreds of thousands of followers in a matter of days.

Another Benefit: Improving Your Chinese

It goes without being said that since Weibo is mostly dominated by Chinese people who don’t speak English, almost no one is using English at all. This is either a huge problem, if you can’t read any characters at all, or will really catapult your written interaction in Chinese.

Like many of you, I’ve been (informally) studying Chinese as long as I’ve been in China, experimenting with different tools and tricks along the way. I’ve already gone on about Studying Chinese with an iPhone or iPod Touch and Weibo is really an extension of that.

I cannot understand everything on Weibo upon first glance (not by a long shot) so here’s what I do: tap and hold to copy something I want to translate to the clipboard. Then pop over to Pleco (the best Chinese-English dictionary app) and paste the contents into the pasteboard reader. Any words or characters that I don’t understand and are likely to be used within the next 6 months get added to my flashcards. Using this technique alone I’ve added 500+ new flashcards to Pleco that I’ve stumbled on in Weibo. Since I don’t have much time to sit down and read Chinese books for hours at a time, collecting and recording these bite-sized pieces of vocabulary works great for me.

After you head over to the Weibo site to register your account, you’ll receive some suggestions on who to follow. If you aren’t interested in following Mainland pop stars and celebrities, I suggest you find at least a single friend who’s on Weibo so you can get connected with people you actually know. If you get connected to a few people that you know from the beginning, you’re likely to stumble upon more people that you know or are interested in. I’ve found a handful of local artists, musicians and photographers who I’ve met (so to speak) through Weibo.

Once you’ve got that covered, you have just to select whether you’ll be accessing Weibo from a computer or a mobile device. Here are your options: 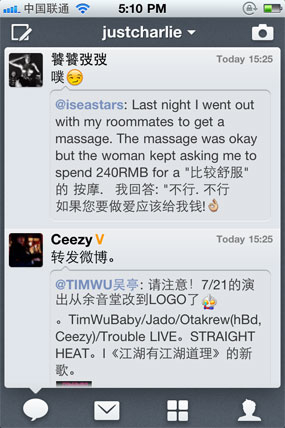 The traditional method of accessing Weibo is through their website at Weibo.com. The interface looks virtually identical to what Twitter.com looked like before it’s redesign about 6 months ago. It’s a 2-column chronological listing of posts by people you’re following. You can hover over usernames to see information on their account like where they’re located, who their following and so forth.

Although there’s an official Weibo client (developed by Sina) which does the job perfectly well, there’s a superior third party alternative called Weico (App Store link / official site). It has virtually all of the same functions as the official client but is better designed and includes several different themes which you can toggle in the app settings. I’m using the Graphite thing which works well and looks great (pictured at right).

Similar to the situation on iOS, there’s an official Sina client as well as Weico. The Weico app on Android is still in beta but is available for free download just as on iPhone and iPod Touch. I haven’t used either of these apps (I don’t have an Android phone) but expect them to be virtually identical to their iPhone counterparts in function and design.

Personally I much prefer accessing Weibo from my iPhone since it perfectly fills idle moments throughout the day: waiting in line, taking a taxi from here to there, etc. If you have a smartphone with 3G access (either an iPhone or Android device), reading and posting on Weibo will be especially quick and convenient for you.

Since going through the paces of registering an account on Weibo and locating friends, I barely even bother with QQ anymore. Although I was never a fan of QQ to begin with, it was the connections it provided – to virtually everyone in China – that were really valuable. Since Sina’s Weibo network has been spreading like wildfire over the previous year, I can retain all of the same connections on a service that’s much less intrusive.

If you haven’t already, it might be worth your time to check it out and see what it can offer you. If you do, send me a message and say hello!