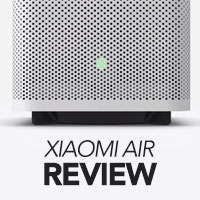 Of all the challenges that foreign residents of Chengdu face, combating air pollution comes with some of the most straight forward solutions. The most important areas which you can protect yourself are by having air filters in your home and place of work. Until a few years ago, the best options for at-home air filters were costly devices made by companies like BlueAir. Cost: around 5,000 rmb.

Then the low-fi SmartAir became available, with just a HEPA filter velcroed onto an ordinary fan. At just 200 rmb, this quickly became the most economical and practical option for expats who aren’t willing to pay thousands of rmb for a device which mostly offers no practical advantage over the completely functional SmartAir devices. But now I have a feeling that the disruptor is in the midst of being distrupted itself, by a Chinese alternative. It’s called the Xiaomi Air and it costs 899 rmb.

Intro to the Xiaomi Air

The Xiaomi Air is a smart air filter released by the emerging Chinese smart phone powerhouse Xiaomi. We’ve reviewed a Xiaomi smartphone on Chengdu Living in the past and were impressed with what a 700 rmb smart phone is capable of. The same can be said of the Xiaomi Air – the value proposition is incredibly high for something that costs only 900 rmb.

The device is like an oblong white plastic monolith that stands about waist-height. As with other Xiaomi products, the Air looks like it was designed by Apple. The shape is simple and unobstructed by facia, the corners are rounded, and there’s a noticeable lack of both buttons and logos. Inside the Air is a cylindrical HEPA filter which comes out through a hidden door mechanism on the front of the device. It requires no tools and Xiaomi sells the repacement filters for 150 rmb, which are recommended to be changed every 90 days.

The important thing that separates the Xiaomi Air from the competition isn’t just the price: it’s the powerful functionality baked into it through its software.

The controls you’ll find on a normal air filter are on, off, and fan speed adjustments. But for us living in Chengdu, I think that’s not enough. Breathing clean air at home in China is worth going through some hassle for, which is why in the past I’ve gone through considerable trouble to automate SmartAir filters and then test and measure the results. Xiaomi Air eliminates all of the hassle and has everything built into one unit.

Here’s a quick overview of the smart functionality built into the Air.

The Xiaomi Air being almost completely bereft of physical buttons means that nearly all of the settings are controlled through a smartphone app. There are both iPhone and Android apps available, downloadable for free on the iTunes App Store, Google Play, and the Xiaomi app store. There’s a toggle within the app to switch between English and Chinese, but there are no other languages available.

If you go to sleep at midnight on weekdays, you can set the Air in your living room to turn off when you go to sleep, and then on again before you wake up. Being able to set timers allow you to conserve filters while still having clean air automatically available when you’re at home.

You will no longer need a device to measure particle levels in your home to make sure that your filter is effective. It’s built into the Air. One downside of this feature is that it shows air quality levels according to the Chinese standard and not the more rigorous American standard. Figures provided by the Xiaomi Air are probably best used to measure relative and not absolute air quality levels. The most important thing is to ensure that the device is keeping you safe, and it does that.

One other subtle detail is a hidden LED light located behind the white plastic cover on the Air. When the indoor air quality is acceptable, there’s a green dot which appears on the front of the device. When the indoor air quality is poor or mediocre, the dot appears yellow or red. It’s nice to have a visual indicator of the air quality which you can see at a glance from across the room. Even better to have this information communicated through such an elegant and unobstructive cue.

When it’s time to change the filter, the Xiaomi Air will let you know via a push notification on your smartphone. From the Xiaomi app, it’s a few taps to order a new filter and have it mailed to your home using the address and payment information you likely already have on file in your Xiaomi account.

For a device which requires a change of filter every 90 days, this is a valuable feature. For years I’ve been using SmartAir filters and writing the date of when the filter should be changed on the filter itself. This has led to me forgetting to check the date and change the filter on many occasions. It’s nice to ditch both the mental burden and the sight of blackened air filters in my living room.

There are a few different types of filters within the Air, here is the breakdown of those courtesy of the Xiaomi Air website: 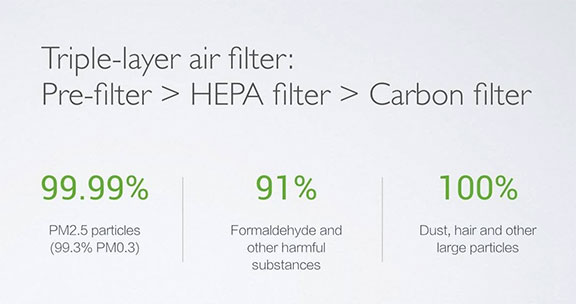 After you set the Xiaomi Air, its controls are accessible from anywhere you have internet access through the smartphone app. It’s unlikely that this is a feature you will use on a regular basis, but it’s nice to be able to have remote control if you leave on vacation and forget to switch it off.

Setting Up the Air in Ten Minutes

Once you unpack the Air, you’ll find a quick start guide which is in Chinese. It includes illustrations which describe basic functions like how to remove the filter and install the smart phone app. It would be nice to have the included documentation available in English, but setup of the filter takes about 10 minutes and is mostly very simple:

For the last few years we have enthusiastically recommended SmartAir filters. It was only a few years ago that some very savvy Americans in Beijing discovered an incredibly low-cost, practical solution to a widespread problem in China. The SmartAir is still a great option to consider and you can find more information on that in our Q&A with SmartAir and on their official website.

Where to Get the Xiaomi Air

There are a few places where you can get the Xiaomi Air, but to ensure that you get the real product without any hassle or additional fees, we recommend ordering directly from Xiaomi. An alternative to that is to order from JD.com at this address: ?????. This comes from the official Xiaomi account on JD.com and not from a private vendor.

Have any questions or comments about the Xiaomi Air? Leave a comment below!