The forces that have held China together during the past 100 years of turmoil, war, and upheaval are in need of an update.

For the past several thousand years there has been a certain way of doing things that has kept the Chinese culture and society from disintegrating in the face of overwhelming changes — the family values trumpeted by the American Right and demonstrated throughout Asia. The ceremonies and customs that govern doing business, buying a home, getting married, or getting riotously drunk with a group of brothers have been in place for so long that no amount of Western business practices or modern sensibilities can shake them completely from their foundations. Foundations built upon the annals of Chinese literature, the undying spoken language and in the tales and legends of an ancient people. Together, these ceremonies and the patriotism they encouraged have brought China to the position they are in today.

Successful as they are, still these practices are in need of an update, because patriotism and culture have given birth to a nationalist ideology that, although powerful, is still a stunted form of what China’s original revolutionaries tried to build.

The revolution in thought, literature and politics that Sun Yat Sen initiated in 1919 was carried on by heralds such as Lu Xun and warlords like Mao Zedong and Chiang Kai Shek. Until very recently, the “update” that Sun dreamed of for his country involved destroying the old and returning China to a “clean slate.” Cleaning the slate meant demolishing customs in order to progress past the times when the Emperor was the “Father” of a vast nation of children. The events of 1919 and the years following were meant to cut Chinese off from their past so that they might be free to learn the ways of the West — in order to be as powerful as the West, like Magua in Cooper’s novel Last of the Mohicans. Yet, Magua’s character in the book is inferior to Uncas precisely because his desire for power twists him away from who he truly is and hinders that last step to maturity that makes Uncas an undying hero and Magua just his antagonistic foil.

In the January edition of Phoenix Weekly, Guo Tie Cheng discusses China’s maturity in a column entitled, “Making Patriotism an Ideology.” In this column, Guo argues that Chinese people have turned to nationalism to replace the foundations of the past, instead of turning within and creating an individual that is self-aware, confident, and mature enough to navigate through the modern world without resorting to “Us and Them” ideologies to reinforce or justify himself. 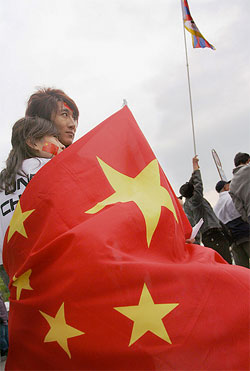 But writers like Guo are not as interested in China’s adventures abroad and the fears of the West. They are more concerned with creating the nation that they want to see, the kind of country that fosters and nurtures a certain type of person. Guo uses the analogy of a mother nursing her babe to describe the eventual break a person must make from their mother/country in order to fully mature. This maturity that Guo writes of requires a much deeper journey than that of 20th century China, which stripped itself of the “Emperor’s clothes” and threw off foreign domination. Guo’s is a philosophical search for meaning that should underpin the customs and patriotism that are natural to any ethnic group, not be subject to them. Guo is tired of hearing his fellow Chinese describe themselves as passive products of 5,000 years of history, he wants them to start making a new history.

Chinese netizen reactions to movies like Red Dawn 2010 and international issues like the Copenhagen climate talks support Guo’s belief that the real work to be done is here at home, not abroad. Some netizens are beginning to discard the vitriolic nationalist ideology that helped make the Chicomm Troll famous — in fact, one the funniest comments on the Red Dawn discussion forum on Douban.com parodies a still-common Chinese reaction to foreign criticism of China: “All (American) patriots give an outcry and boycott this directors work, which has outraged all (Americans)! Every (American) patriot who supports say Aye!” (rough translation)

A brief survey of Chinasmack‘s coverage of Akmal Shaikh’s execution shows that the Chicomm Troll still lives, but the trend is already moving away from the screeching nationalists we saw during the 2008 Olympics and toward the modern Chinese citizen able to distinguish between himself and his nation. The movements in modern Chinese society are exceptionally quick, yet still rooted within the ancient customs and traditions that hold the nation together — it is this paradox that is being struggled with right now throughout Chinese society. 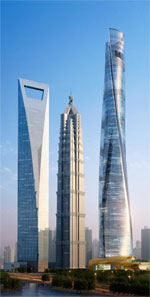 So what is the role of the West now? Now that Chinese banks and construction firms feel they have learned all they have to learn from western institutions; now that America’s struggling economy only reinforces the belief that there is nothing more the West can offer China; now that Prime Minister Gordon Brown is powerless to stop a British drug smuggler from being executed in China: what now?

In essays like this one by author and China researcher Kerry Brown, the key is to help China along. This view is not founded upon an utopian view of brotherly love between nations, but on the very concrete truth that national interests across the West merge with China’s peaceful transition from the nationalistic ideologues (that helped China survive and grow in the last century) to the mature global citizens that can help the world survive and grow in the coming century. Instead of paternalism or antagonism, Brown encourages exchange.

Another sentiment can be found in David Goldmann’s essays for Asia Times as Spengler. Goldmann derides the lack of will amongst Americans to carry on the mantle of hegemon and, like his pseudonym, predicts dire consequences if the US sheds the “burden” of leadership. For Spengler, America must prevail across the world in its various struggles in order to maintain world peace and China is one of the players that America must deal with, by all means necessary.

Perhaps the true battle lies not in the fields of Pipelinistan or in the boardrooms of Wall Street and Hong Kong — but in the minds of the people seeking the right way to live. Just as Americans voted in an intelligent man of mixed heritage, so the Chinese are engaging in a soul-struggle over what it means to be Chinese. These two movements are compatible and represent a generational search for meaning in a globalized world that pokes fun at oppressive nationalism (a la the CCP) and renounces corrupt crusades (a la War on Terrorism). A conflict arises between these movements and the entrenched interests of a different generation, visible in the US Congress’s gridlocked partisanship in the face of veritable dissolution and the cries of Traitor! that meet any Chinese questioning of the State as is.

The outcome of China’s soul search will determine the timbre of the 21st century, for all of us.