By the time I first arrived in Chengdu I had already heard about Xiaomi’s amazing value proposition, as well as their similarity to the iPhone user interface aesthetic. I was hesitant about moving away from the iPhone since that was the only smartphone experience I’d had, and is basically the gold standard for smartphone hardware and software.

But at 800 RMB (about $130 USD) and with glowing reviews, I decided that Xiaomi’s Hongmi 1S was worth a shot. Yes, the hype had gotten to me. Now, two months into using my Hongmi 1s with its Xiaomi 5th generation user interface (called MIUI and pronounced “Me-You-I”), I’ve learned a few things. Here are my findings on the Hongmi 1S and MIUI 5.

Note: to be clear, the company that makes this phone is Xiaomi and the phone is the 1S model in the Hongmi product line. I know, lots of names.

The Hongmi 1s is Xiaomi’s most budget phone to date. It’s 800 rmb on Jingdong, has 8gb of memory, decent front and back-facing cameras, a removable battery with a reasonable lifespan, and charges via an included mini USB cable.

The phone feels fantastic in your hand, is lightweight and has a 4.7 inch body (full technical specifications are available here). Like many Android phones, there are three touch sensitive buttons below the screen: a menu button that varies in function depending on what you’re looking at, a home button that takes you to the home screen, and a back button that conveniently takes you back to whatever page you were just on. This is essentially a very standard Android interface, but one feature that I absolutely love is the LED light front and center below the home button. I love it because you can set a different color for different notifications, so if you missed a call it’ll slowly pulse red, a WeChat message will show green, texts blue, and 3 or 4 other colors to choose from. This cleverly helps you know at-a-glance what you missed.

When you open up the back, it’s got a mini-SD card slot that you’ll probably need to utilize for extra memory, and a dual SIM card slot which is handy if you leave the country often. The phone and screen have survived several drops, though the SIM card has popped out of place and I’ve had to re-set it several times in my two months of owning the phone. It’s a budget phone, so things like that are bound to happen, but those types of little annoyances have been relatively infrequent.

Twice now the touch screen has suddenly become over-responsive making typing a hassle, but other than that, the SIM card popping out, and the unimpressive battery life, there are really few complaints I have about this cheap phone. It’s fairly sturdy and boasts a ton of of cool functions.

The hardware of the Hongmi 1S is what really makes this a budget phone. The real treat is MIUI, the Xiaomi interface. This phone runs MIUI 5, though MIUI 6 has just been released on other Xiaomi phones since I purchased this. From what I’ve read, MIUI 6 is mostly a cosmetic overhaul and most of what you’ll read below is applicable to the newest iteration as well.

Before you even unlock the phone there are a great number of functions you can access that are really nifty. Unlocking the phone is a simple swipe down from the middle of the screen, but swiping left will immediately access the dialer, and swiping right will reveal the text message center. Swiping up opens the camera. Double-tapping the screen gives you control of your music without having to unlock your phone.

From the lock screen:

Beyond that, holding the touch-sensitive home key will activate the flashlight. Reducing access to the flashlight from two actions to a single touch may seem trivial, but it makes a world of difference, especially if you keep your phone password protected.

I’m constantly interacting with the toggles and notification centers, accessible through a simple swipe from the top of the screen. The toggles put the most frequently-used functions a single tap away. It is extremely customizable: I can adjust brightness, activate or deactivate Wifi, data usage, Bluetooth, take a screen shot, turn my phone on vibrate, as well as get a quick look at the date and time.

MIUI also does a great job of helping set your data usage. You can set it up by app, simply choosing which are allowed to use data and which are restricted to Wifi.

When you try to access one of those restricted apps off Wifi, a notification will pop up letting you know it’s restricted, in case you ever forget. You can also set a data cap, which I imagine people buying a budget phone like Hongmi 1s would want to do.

These screens help you regulate your data limit and how it might benefit you: 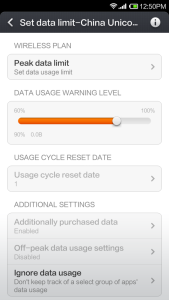 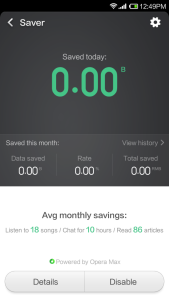 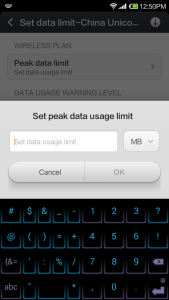 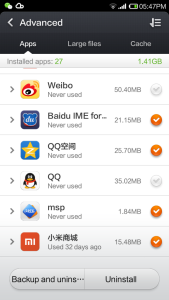 The first problem I ran into is that English-language predictive text on the phone is nonexistent. Luckily, SwiftKey – a super slick and customizable swipe-text keyboard app – is available for free in the Xiaomi store. SwiftKey and other text-prediction apps downloaded on MIUI devices warn you that any passwords entered while using the app will be stored. Obviously disconcerting, I’ve just opted to turn off the app when I’m signing in to services for the first time. But the cynic in me thinks this goes on with all predictive text apps, whether they warn you or not, and I find the honest warning refreshing, if also frightening.

MIUI has also added some interesting features in the name of protecting the user. The first time I noticed this was when I plugged in my headphones: as I turned the volume up on my phone, the phone stopped me and reminded me that playing music too loudly while wearing headphones can cause damage to your ears. Now, some people may read this message and consider it nagging, but I find reminders like that, well, thoughtful. You may not feel the same as I do about that feature, but the way MIUI deals with fraudulent callers is something everyone can be excited about.

The caller ID in MIUI not only identifies numbers, but also identifies if other MIUI users have reported this number for courtesy calling or any other transgression. It’s effectively a crowdsourced effort against fraudulent courtesy calls, coordinated by MIUI. In addition to warning you about a number, MIUI tells you exactly how many users have reported this number. The same is done for text messages, putting them in a spam folder. This is perhaps the most laudable thing Xiaomi has done.

Many companies conduct research on their users to do market research and figure out how to earn more money from customers; here, Xiaomi is using its large user-base to fight against one of the age old problems of having a phone. This is extremely useful here in China where it’s not uncommon to get spam calls and texts of all sorts.

The Home Screen and App Management

When you unlock the phone, you’ll see the available apps in a very iOS-like layout. Organizing apps on the homes screen is very similar to organizing on iOS, but with even more functionality. Here’s one of the actions you can make to organize your apps.

Instead of moving one app at a time, which can get tedious, you can move multiple apps at a time:

You have your standard apps like Weather, Music, Notes, Calendar, Calculator, Audio Recorder, Baidu Maps, etc. all pre-installed on the phone. There are some proprietary Mi apps that I chucked into a folder and haven’t really used. I’m sure you’re familiar with the functions of all of these apps, and you may even download other apps to replace them.

The music app, though, might be what you’ll be using the most. And you’ll be happy to hear that the music app has some pretty nifty functions. I mentioned earlier that control of the music is available from double-tapping the lock screen. If you’re looking at the Music app on the home screen, there’s another quick gesture you can do to access the music. Just swipe down to look at what’s playing, like this:

Also, if you’re a bit OCD about the album art, hit the menu button and download the album art based on the meta data in the music files. Sometimes this works, sometimes it doesn’t.

Another great feature of the Music player is the built-in sleep timer, which will turn off the music after a set amount of time. You also have very easy access to volume options. You can easily set the separate volume levels for media and ringtone/notifications with a single tap.

Features like these don’t make or break the phone, but certainly make it more user-friendly and elevate the experience. Overall, I feel like I’m spending less time in menus and more time with these kinds of quick actions to accomplish the most frequently-needed tasks, and that saves time and energy.

My Verdict on the Hongmi 1S

If you’re on a tight budget, you could do much worse than the Hongmi 1S. In fact, since I purchased the Hongmi 1S, the Hongmi 2 has come out and is also priced at 799 rmb on Jingdong. It’s a slightly sleeker looking phone and supports MIUI 6, the next iteration of the Xiaomi operating system, so here’s what I recommend: if this review turned you onto Xiaomi, go for the newest model available. 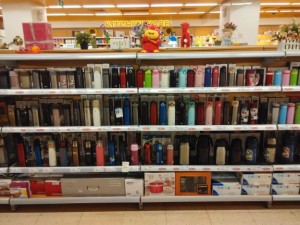 My experience with Xiaomi hardware and operating system has been very positive with very little to complain about. If you have more cash to burn, the next step up in the Xiaomi line is the Mi 3, which comes in 1,399 RMB on Jingdong, and just released recently was the Mi 4 for 2,000 rmb. 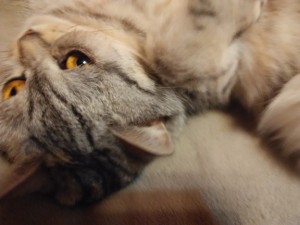 Xiaomi is an exciting company with some pretty big ambitions. They’ve release smart lightbulbs, air purifiers, a GoPro clone, and are undoubtedly working on some other home appliances. My experience with the Hongmi 1S has made them a company worth watching in my eyes and I’m excited what else they’re going to put out in the market for dirty cheap prices. Look for more reviews on Xiaomi products in the future on Chengdu Living.

If you own a Xiaomi product or have an opinion on anything Xiaomi-related let us know in the comments.

(All .gifs included in this post were taken from C4ETech’s awesome “44 Tips & Tricks w/ MIUI” video on Youtube. The phone used in that video is a Xiaomi 3, not a Hongmi 1s.)