When it comes to learning or practicing Chinese characters, the iPad has always had enormous potential. But although the potential of the iPad was always clear, it wasn’t until the last year or so that truly great iPad apps for Chinese learners began to emerge.

One of those is Word Tracer, an app for learning Chinese characters by tracing with your fingertip. If you’ve been learning Chinese for a while now, you might have realized that the physical action of writing characters is crucial to committing them to memory.

Here’s how this works.

Why Writing is Essential to Learning Chinese Characters

Our brains are divided into sections which are responsible for processing different kinds of information. When we listen to someone speak, the part of our brains that handles listening and language is engaged, which then commits some of that information to memory. However, the process isn’t very discriminating and crucial information is treated the same way as non-essential filler.

When you write things down, though, something happens. Another part of the brain is activated, which is much better at filtering out relevant information. In short, our recall is dramatically affected and we’re more likely to use what we’re learned. This is why writing is essential to learning Chinese characters. Instead of repeatedly writing the same characters over and over hundreds of times, we can use intelligent tools like iPad apps to make the learning process quicker and likely to suit our needs.

So, back to the topic: what’s great about Word Tracer?

Word Tracer is an intelligent tool to teach you to write Chinese characters correctly. In the words of the developer:

“Word Tracer – Learn Chinese is an iPad app that is designed for people who wish to learn to write Chinese characters properly through tracing and feedback provided through the device. Writing Chinese is one of the most challenging aspects of the language; this tool provides an effective means to facilitate learning by letting the users practice 1500 commonly used Chinese characters (Practice Mode) and testing themselves (Test Mode). Common phrases are also provided to allow the learner to see how the word is used in context. The app is developed using a game engine and masterfully designed to provide the best user experience and performance. Every character comes with pinyin (with actual voice recording), English meaning and common usages.”

Essentially, use of the app is broken down between two different types of users.

If You’re New to Chinese Characters

This is probably Word Tracer’s strong point: when it’s in the hand of someone new to learning Chinese. Here are some of the benefits to the beginner:

How I Use Word Tracer

When I launched the app for the first time, I jumped into practice mode to get an idea for what I was dealing with. What I found was that you can begin using dozens of different character lists which are already generated and included in the app. Lists like:

This made it easy to jump straight into characters that are familiar to me, but are a challenge to write correctly without assistance (for me I went straight to Frequency Rank 1,001 – 1,500). Once I’m working with these characters, I can choose to hide or show the grid, audio cue, or stroke order guides.

If you have an iPad and you’re already studying Chinese characters, this app is a no-brainer at the $2.99 price. Upon release it was listed as an Apple “Staff Favorite”, probably due to its immaculate design and smooth performance (the app is built upon a game engine). 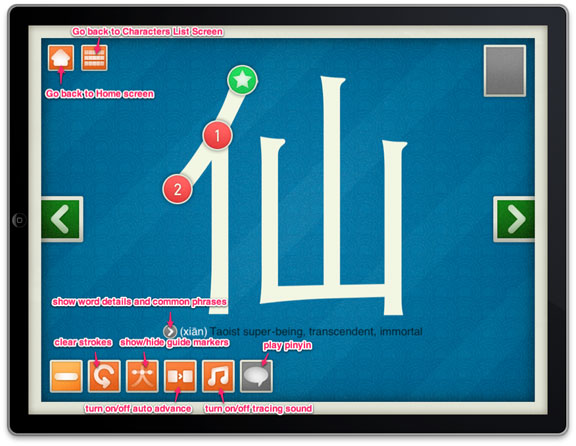 Check the links below to read more about Word Tracer or to download it from the iTunes App Store.

Note: this isn’t a paid review, this app really is just great.

Are you using any other iPad or iPhone apps to study Chinese?